In each of the last few years, my principal theatre highlight has come from the World Theatre Festival, held each February at the Brisbane Powerhouse. So it was with much anticipation that attended the launch of its 2014 season. And, as expected, it looks like contemporary theatre enthusiasts will have plenty of choice when next year’s festival takes over the Brisbane Powerhouse.

Since its launch in 2010, the World Theatre Festival has showcased many new and innovative shows from around the world. Indeed, as a celebration of the best international theatre practice, the 2014 line-up features 11 shows from as far afield as Ireland and South Korea. In fact, the announcement of the return of Motherland Productions to the festival was met with the most enthusiastic response of the night. “Underground” will see the environment of celebration so integral to the festival, enhanced by night long entertainment at an installation of a strange and beautiful travelling underground tavern, South Korean style.

Also returning to WTF (to use its ambiguously funky acronym and newly branded title)  in 2014 is Ireland’s Pan Pan Theatre, which will follow up this year’s retake of Isben’s classic “A Doll’s House” with a staging of Samuel Beckett’s radio play “All That Fall” in an actor free examination of the nature of storytelling, from a rocking chair. (The internationally acclaimed event features an installation of 60 rocking chairs amongst surround sound and ambient lighting.)

WTF’s 2014 program offers something for everyone – from New Zealand’s “Black Faggot” examination of sexuality and place through the narrative of growing up gay in Maori culture to the grand “Wedhus Gembel” and its enormous puppet study of how we maintain myths and connections to the past in a time of continual reinvention. Diversity extends to the themes too, which range from the personal to irreverent.

The launch event emphasised Brisbane as a circus city with a trapeze artist performance, La Soiree style, as will feature in “Mario: Queen of the Circus presents his Crown Jewels”. Not only this but the program features the Australian premiere of “The Great Spavaldos” from UK’s IlPixel Rosso (returning after this year’s “And the Birds Fell from the Sky”,) which will see two audience members at a time experiencing life as an acrobat in an immersive video-goggle experience. 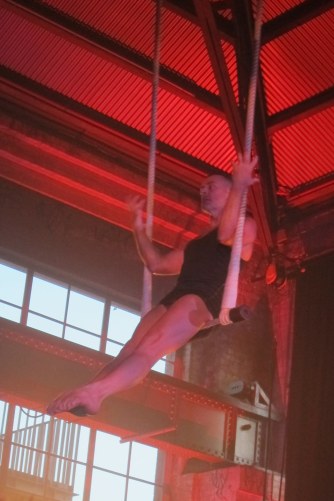 Certainly, WTF represents a celebration of art in all its forms, from the poetry of “Solpadeine is my Boyfriend”, presented entirely in rhyming couplet and the spoken word storytelling of “Gudirr Gudirr” to the contemporary dance of “Abandon”, and the solo show “A Boy and His Soul”, which explores the concept of music as a soundtrack to life. It is also serves to highlight the value of collaboration, such as between Opera Queensland and Dancenorth in “Abandon”.

Brisbane has a growing contemporary culture vibrancy and an earned place in international theatre dialogue. The Brisbane Powerhouse is a key part in facilitating this and it is fitting, not only that this is the venue of the festival, but the WTF should include World Premieres such as “She would Walk the Sky” from Australia’s Company 2. 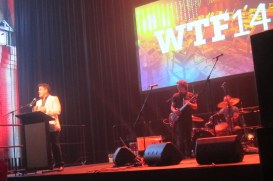 As Artistic Director Kris Steward assured the launch crowd, WTF is about stopping to celebrate the diversity of theatre practice and I, for one, cannot wait be begin next year’s journey, with, as he described it, one foot in New Farm and one foot in New York. For it is thanks to WTF that I have seen such remarkable, resonating shows as the uniquely constructed “White Rabbit, Red Rabbit”, (no director, no rehearsal and a different actor every night reading from a previously unseen script by a young Iranian man forbidden to leave his country for political reasons), Gob Squad’s recreation of Andy Warhol’s work in “Kitchen” (so good we had to see it twice) and 2012’s “Discover Love”, the profound, true story of a husband kidnapped and murdered for rendering assistance to the democratic body of Belarus, presented by the underground Belarus Free Theatre.