“><R&J” director and gatherer of the group which evolved  into The Breadbeard Collective, Lucas Stibbard is best known for his critically acclaimed solo show “boy, girl, wall”, staged by The Escapists at La Boite Theatre in 2011. And now, the show has been invited to present in the USA. To help fund this incredible opportunity to showcase this story to the world, the show is running a pozible campaign, the rewards of which include attendance at a one night only fundraiser remount of “boy girl wall” on Monday 16th December at Brisbane Powerhouse.

This is an opportunity not to be missed, not just to support the upbeat, one-person show in its journey to international exposure, but to once again enjoy its memorable use of chalk, sock puppets and its menacing Montague Road magpie. As anyone lucky enough to see the show as part of its La Boite season will attest, “boy, girl, wall” is a witty and wickedly funny night out, as the audience is taken on an impressive, high-energy ride along with its dozens of eccentric characters. And it is no surprise that “boy, girl, wall” has won The Escapists much critical acclaim, including the 2010 Matilda Award for Best Independent Production, or that Stibbard was nominated for the 2011 Helpmann Award for Best Actor in a Play.

“Boy, girl, wall” is a simple tale of two people, Brisbane apartment block neighbours Thom and Alethea, whose romance proceeds as a series of comic misadventures. What excels the show into memorable mode is its use of a giant blackboard upon which Stibbard draws most of his props as they are required. I only wish I was going to be in Brisbane for its return one-night run. 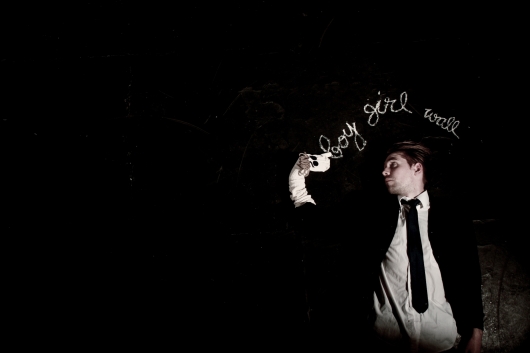