What is the etiquette in saying there’s a Shakespeare play you don’t like? Perhaps it is an admission of philistine tendencies to say that I really don’t like “Romeo and Juliet”, despite (or maybe due to) its role as one of the Bard’s most accessible works. Yet it is this accessibility that makes it such valuable material for the experiment that is The Breadbeard Company’s pretentiously titled “><R&J (GREATER THAN, LESS THAN ROMEO AMPERSAND JULIET)”, presented as part of La Boite’s 2013 Indie series.

And there is no doubting that the show is an experiment; the evening begins with a projected definition of the term as “a course of action tentatively adopted without being sure of the eventual outcome.” What follows in the next 100 minutes is anything but tentative. As the audience is taken through aim, method and results, the players deconstruct and reconstruct the text. There is an organic feel the show, evident from the opening scene in which performers are lined across the stage displaying the night’s props (from ukulele to Viking helmet) to the predominantly youthful audience. The metatheatre continues throughout, including through the Stage Manager’s megaphoned Prince interjections. Although momentum lags a little in Act Four, the production is energetic, enthusiastic and physical. 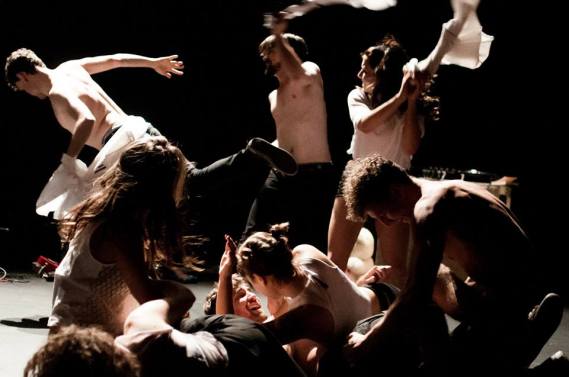 When used with care and attention, music has the faculty to transcend immediate thought and access a deeper response. Indeed, music can form a vital part in the creation of atmosphere, and from Joy Division to Kanye West, the diverse soundtrack serves this purpose. It is unfortunate, however, that the music often competes with, rather than compliments performers’ dialogue. The lyrical nature of Shakespeare’s words is diminished when drowned out by music, audience laugher or when performer’s delivery is rushed. An exception to this has to be David Stewart, whose standout performance shows an impressive emotional range in all his roles. (For “><R&J” features initially distracting role swapping, without gender bias).

Under the direction of Helpmann Award nominee Lucas Stibbard, The Breadbeard Company uses a range of post-modern techniques as it seeks to not just relocate Shakespeare’s narrative, but also to shift audience understanding of it as a story of two ordinary youths caught up in the sensation of youthful love. Bringing Shakespeare to a modern context is nothing new; one only has to look to Baz Luhrmann’s ground-breaking film of the tragedy as evidence. Like Luhrmann’s text, this production has moments of true beauty. But while it is beautiful, it’s not delicate. The deaths of Romeo and his Juliet are naturalistic and confronting in their presentation. After all the role and gender swaps, they are, unfortunately, received with laughs rather than horror by an ill-prepared audience. 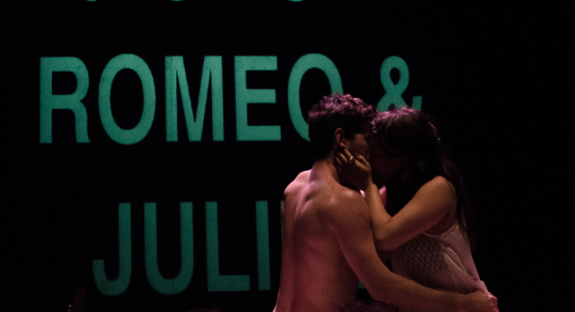 It is interesting to see La Boite’s Roundhouse Theatre transformed into studio mode for this show and the resulting intimacy is an asset in moments such as the balcony and death scenes, which are highlights. Despite the cumbersome number of props, staging is simple and enhances the show’s overall aesthetic. Unfortunately, there are moments in the script that call for a similar economy. When the show begins with a monologue as to the five rules of making a mix tape, the appeal of the obvious “High Fidelity” reference is diminished by over-explanation in an attempt to contextualise the mention. And this is not an isolated example. Part of the delight of intertextual references, be they pop culture or otherwise, is the joy and intimacy created by the shared recognition. To deny audiences this experience, is disrespectful and disappointing and it makes me wonder who the show is for, The Breadbeards or their audience.

“><R&J” is a unique theatre experience. It is a boldly imagined production predominantly for young people, by young people, but it is also so much more. For older audience members, it is a reminder that the Bard always has something new to reveal, even if a show isn’t your favourite, for Shakespeare always wins.