Shakespeare’s “The Tempest” is an epic play of many themes. Overthrown as the rightful Duke of Milan, enigmatic protagonist Prospero, along with his wispy, dishevelled, eager-to-please daughter Miranda have been 12 years banished to a remote island by Prospero’s usurper brother, Antonio. Aided by a magic fairy, Ariel, Prospero conjures up a powerful Tempest that shipwrecks the vessel carrying amongst others, his brother, the king, a jester and the king’s son with whom Miranda falls in love, on the magical island.

And it is very much a magical island that has been created in the Queensland Shakespeare Ensemble’s unique and highly-effective staging of the play, with the audience sitting on stage to watch some of the show’s grand scenes, such as its opening titular storm spectacle, being performed from the stalls of the Roma Street Parkland amphitheatre. When the action moves to the intimacy of the shared stage, the result is a heightened engagement and understanding of the text, as the proximity allows for appreciation of every nuance of characterisation, from the inflections of dialogue to the most subtle of facial expressions. As juxtaposition, however, the show is also bold in its fusion of a range of genres including live music, dance, physical theatre and clowning, to the point where, the language of the Bard takes a back seat to the visuals of the performance. Although this has the capacity to alienate traditionalists, anything that has parkland children attempting to find perch in nearby trees to watch Shakespeare, is surely a good thing and, as memorable as many of the on-stage antics are, to witness the pure delight on the faces of young people entranced by at 400-year-old text is a joyous experience. 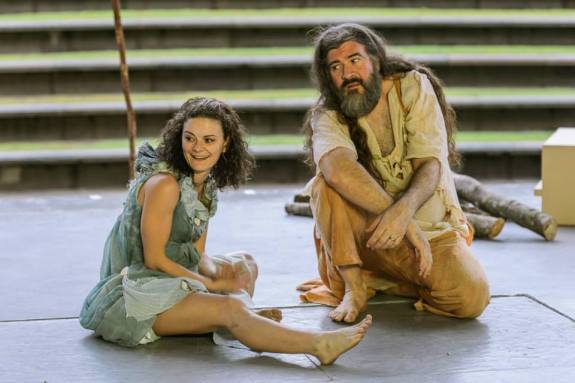 Shakespearean comedies contain a wide variety of characters, however, in the case of “The Tempest” it is patriarch Prospero (widely thought to represent Shakespeare himself) whose heart beats at the centre of the story. This is not only noted by Director Zoe Tuffin in the production’s program, but realised by a stand out performance from the company’s Artist Director, Rob Pensalfini as the complex character. Well-meaning and sympathetic, rather than bitter, he is more father than wizard, which only serves to emphasise the endurance of Shakespeare’s characters as complex, flawed beings – like all of us.

The prospect of enduring a play that runs for over two hours can sometimes spell torture, but in this production of Shakespeare’s final work, the time flies by as the cast makes full use of comic opportunities, unafraid to play for laughs. Caliban’s hilarious interactions dominate the middle of the play, much to the delight of many of the matinee’s youngest audience members. Indeed, Zac Kelty’s characterisation, comic timing and physicality as the earthy slave monster, combine in an exuberant, highly engaging performance.

“The Tempest” is full of many weird and wonderful creatures. Usually one of the most memorable is the spirit Ariel (borrowed from air) bound to serve the magician Prospero, however, Rebecca Murphy’s realisation of the nymph is not ethereal or delicate, but bold in demeanour and dress, which is a disappointment for one of Shakespeare’s most light-hearted stories. The essence of this, is however, captured in a number of other ways, including the memorable image of sailors prancing away in escape across the stalls and into the Roma Street parkland.

Like Shakespeare himself, his namesake Queensland Ensemble has an acute sense of what makes good theatre and in the case of “The Tempest”, they deliver it in abundance. This is a play of romance, lyricism, musicality and comedy, and a production with something for everyone, much like the Shakespeare of its day.

1 thought on “Shakespeare in the park(land)”