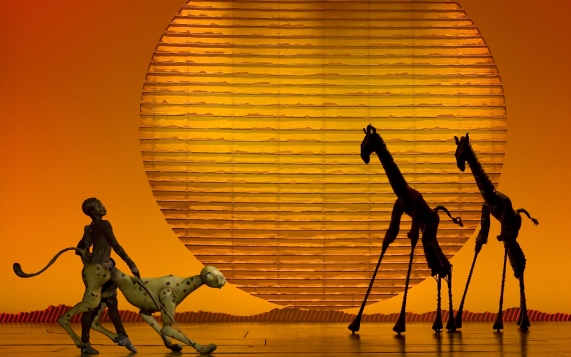 Disney’s huge musical “The Lion King” is nothing short of a hit. And as it settles in for its four-month run at the specifically modified Lyric Theatre, the longest at QPAC in over a decade, it is easy to see how. Its initial minutes, where animals parade through the stalls are joyous in their stagecraft as sophisticated puppetry and captivating costume design transform actors into gazelles, elephants, hyenas and lions.

Adapted from Disney’s animated film of the same name, the story is a familiar one (think of it as “Hamlet” with fur and listen for the ‘there’s the rub’ type ‘to be or not to be’ references within the dialogue); it tells of Simba the young lion cub (Jayden Siemon) as he learns all about life in the African savannah, totally unaware that his evil Uncle Scar (an outstanding Josh Quong Tart) is planning to kill him and his father Mufasa (Rob Collins) to become king. After the sinister and scheming Scar orchestrates a stampede which kills his brother, he orders Simba never to return, before assuming the crown himself.

Everyone knows the rest – Simba comes of age under the guidance of colourful guardians Timon (Jamie McGregor) and Pumbaa (Russell Dykstra), he is reunited as adult (Joshua Williams) with his betrothed childhood friend Nala (Jessica Kim as the child cub, Josslyn Hlenti as an adult), and faces an internal struggle over whether to return and fulfill his birthright.

Although new songs and scenes have been added, this far from a stage show in its own right. Beyond just the inclusion of iconic moments and songs, many of the characters convey vocal nuance almost in imitation of their movie counterparts – Josh Quong Tart is Jeremy Ironish in his beguiling voice and, as Pumbaa, Russell Dykstra sounds very much like Nathan Lane. A Scottish sounding Zazu (Benn Welford), however, is an awkward choice for the mouthy red-billed hornbill

Generally speaking, the cast delivers with little fault, as is to be expected given their experience in the roles. After a comparatively slow Act One, things improve with the arrival of Pumbaa the farty warthog and Timon the wise-cracking Meerkat. Together, Dykstra and McGregor bring out the hilarity of these characters, with McGregor giving one of the show’s standout performances. As the kind and wise monkey, Rafiki, Buyi Zama puts on an equally impressive show, thanks to her world-class vocals. 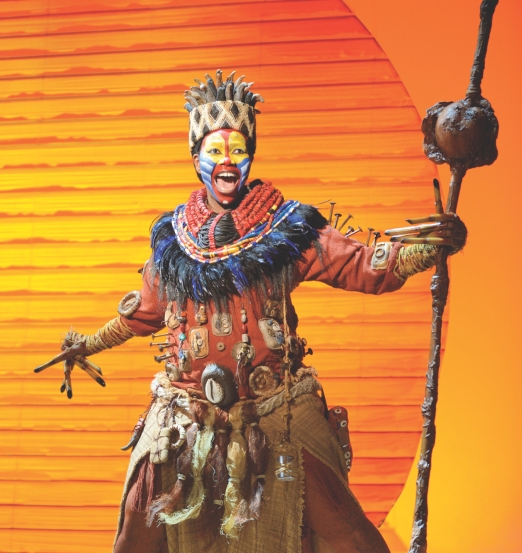 With hit musical numbers by Tim Rice and Elton John, such as ‘Can You Feel the Love Tonight’ and ‘Circle of Life’, “The Lion King” is a family-friendly show to delight audiences of all ages. It’s not all musical magic, however, with Act One’s ‘Be Prepared’ sticking out as a strange change of pace and tone in its pop music pulse and shirtless dancers.  Music comes not just from the musicians in the pit, but is enhanced by two percussionists on platforms either side of the stage, which only adds to the soundscape’s infusion of traditional African music and instrumentation.

The visuals are simply superb. Lighting is effectively atmospheric in its range of depictions, from presenting the vibrant greens of the jungle and enhancing the colour and movement of songs like ‘Just Can’t Wait To Be King’, to suggesting the forbidden darkness of the elephant graveyard and revealing the richly-red anger of Scar’s lair. Staging too, is quite wonderful, particularly in its depiction of the drought and destruction of the pride lands under Scar’s rule. Indeed, its hyper-visual form of storytelling makes it the ultimate live theatre experience. When the lionesses pull streams of mournful tears from their eyes, it is an almost operatic in its imagery, however, there is no kids/adult theatre division, just an enduring experience to lift the heart and challenge the senses. For that is the thrill of live theatre that doesn’t exist anywhere else; it’s all about what’s happening in the moment.

17 years after its Broadway debut, “The Lion King” has proven itself as an enduring musical that can certainly stand on its own merit. Although there is need for some superfluous scenes to accommodate moving the impressive set pieces, the show is devalued by its token pop culture mentions, such as references to Ikea and “Frozen”. With its colourful characters and heart-warming story, inclusions like this are not needed; the audience is already impressed. With its first class staging and the artistry of its costumes, puppetry and masks (with designs that allow you to easily look past the actors to the animals), this is a show that is still nothing short of spectacular. Such a shame that there is no post curtain call encore of, for example, a full cast ‘Hakuna Matata’.