Whereas week one of Awkward Conversation had family as an organising centre, Week Two saw the focus move to sex… well gender to be precise. And it is no more finely seen than in David Burton and Claire Christian’s work “The C Word” about the f word… feminism. Though this is a predominantly static work, it is filled with fabulous lines of wit and wisdom from the women who take the stage. Under Todd Macdonald’s direction, they are feisty in their frankness as they tell of Cleopatra, Beyonce and Julia Gillard and that misogyny speech (passionately shared to the injections of audience applause). Nobody performs teenager as well as Emily Burton and her delivery of a speech about feminism to her class is a show highlight that will have you hoping for more.

Notions of gender as also central to the wicked game that is “Salome”. Salacious in its lustful provocation of red and black, satin and lace, and full frontal nudity, it is derivative of other works from director Steven Mitchell Wright so not entirely shocking. “Salome” was written by Oscar Wilde in 1871 while imprisoned for crimes of sexuality, but things have changed, we are told; we live in the suburbs now. And what a strange mixed up suburbia it is.

Suburban horror also drives Martin Crimp’s “Fewer Emergencies”. Under the direction of Lucas Stibbard, this largely talky work evokes some strange visuals, but is particularly interesting in how it begins with narrators interjecting from within the audience before making their way to the stage to take the audience through a loosely connected series of violent events, even sharing a song to shatter illusions of fatherhood.

Music features strongly in Daniel Keene’s “The River”, the story of a down-and-out dad attempting to reconnect with his son. The protagonist is essentially an unlikeable character with little backstory to engender audience empathy, however, it is a testament to Ron Kelly’s skill in inhabiting the role of wayward, drunken father. Surely the work contains many life lessons and analogies, however, the most memorable aspects are its aesthetics with live music and some sublime lighting that sees the stage bathed in blue during a journey though “The Boys Light Up.” 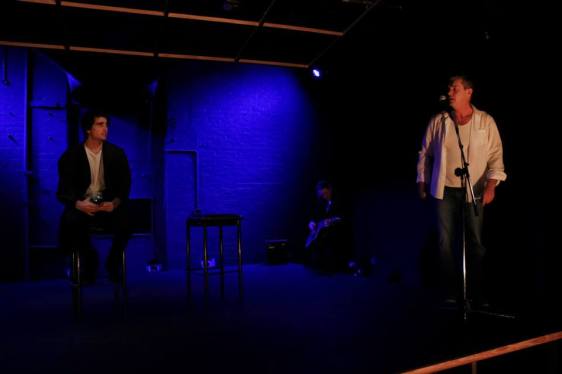 Together with Week One’s offerings, “Awkward Conversation” serves up exactly that – some discomfort, some interest and a whole lot to take away and talk about. This is part of the reason why collaborations can be so exciting, for collaboration allows fission as much as fusion. The juxtaposition of ideas offers different perspectives and opportunities for a contemplative conversation.