The experience of Thomas Hutchins’ directorial debut, “Dust Covered Butterfly” reminds me of that quote about art….I don’t know much about art, but I know what I like.’ During the hour long experimental new performance work, I wasn’t always sure what was going on and even now, I’m not entirely confident in my interpretation of its comment, but I knew pretty quickly that this was a show I liked and whose life cycle I’d love to see continued.

After being led through the Metro Arts carriageway, audience members enter the Sue Benner Theatre from what is usually the stage. The backward use of the theatre allows the space to be transformed. The walls are billowed by plastic drop sheets (the kind that Dexter uses) and plastic bags, and like a vision from “Alien”, figures are silhouetted atop the tiered seating of what is usually the stalls. The blue lighting and creepy soundscape create a feeling of coldness of apocalyptic extremes. It is an ominous introduction to a daring contemporary performance that survives solely on audience empathy.

Spotlight is soon upon the audience as a charismatic ringmaster or sorts bounces in to challenge us with a volley of questions asked from disconcerting proximity. There is no escape. There is no comfort. And we soon learn that the shadowed figures are not bound together in some shared bunker-like experience, but are representations of three character archetypes: The Captor, The Bait and The Captive, locked in a basement for a morally challenging battle for survival. And it’s a battle in which the audience represents a key component, as we are asked to vote, secretly at first and then in plain sight, on their roles and, consequently, their outcomes. 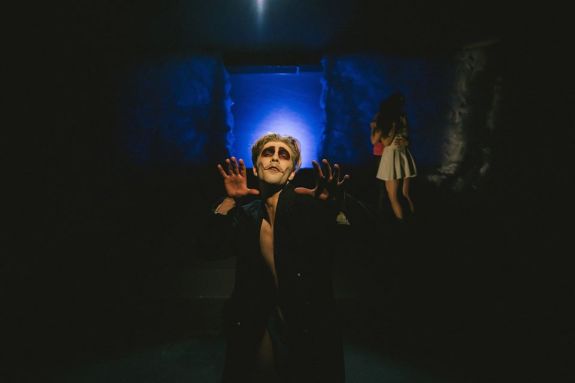 Regardless of their allocated role on each given night, this is a demanding show and its performers, Bella Anderson, Katy Cotter and Michael Wittred seem to move seamlessly between roles. Cotter is enticing as the bait, delivering a performance filled with nuanced attention to detail. As the incapacitated, abused captive, Whittred appears Batman Joker-esque in makeup, but with much less menace, especially when singing out in his underwear (live, original music features as one of the show’s highlights). However, it is Chris Farrell who steals the show as the vamp, camp Host. Cheekily, with a showmanship not unlike that of The Emcee of “Cabaret”, he both narrates and controls the action, acting almost as translator for the audience.

“Dust Covered Butterfly” was born as a performance experiment which sought to tell story by any means but spoken word. Thankfully, a script was developed for its Metro Arts metamorphosis. Coming as it is from various sources, interviews with serial killers and personal accounts from survivors of the most unimaginable atrocities in basements for extended periods of time, it is at once macabre and eloquent. There are even some moments of humour with David Attenborough descriptions to balance out its Neil Gaiman quotes. The plot line is not always clear, however, the mood is undeniably haunting and the live music is quite wonderful in its lingering lyrics. 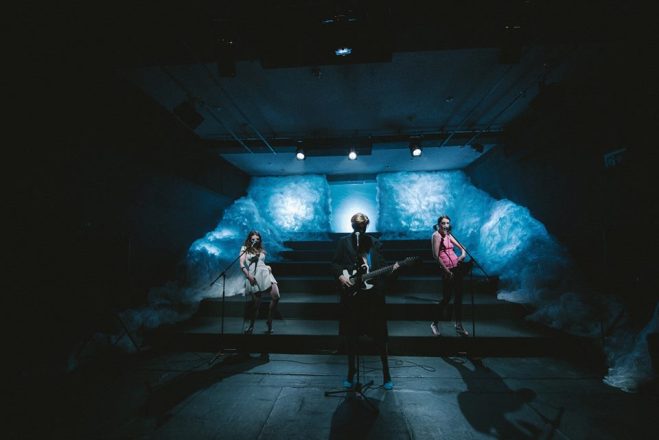 Undoubtedly, this is not a show for everyone. It is thought-provoking, interesting and will stay with you long after leaving as you try to digest and fully appreciate it…. like any good work of art. As the graffiti wall words of its carriageway entrance claim, magic happens. And “Dust Covered Butterfly” shows how this can be true even in darkest corners of disturbia.