La Boite Theatre Company’s Indie program is not continuing into 2016, it was recently announced. Before it goes, however, there are still some last 2015 works, including “The Motion of Light in Water” from Melbourne-based contemporary ensemble Elbow Room. Science Fiction fans will recognise the work’s title from the autobiography of celebrated American author of “Babel-17” Samuel R. Delany, “The Motion of Light in Water: Sex and Science Fiction Writing in the East Village”, in which he recounts his experiences growing up as a gay African American, as well as some of his time in an interracial and open marriage with Jewish poet Marilyn Hacker.

And so the audience is taken in an introductory scene to 1960s America, where 18-year-old Delany (Chip to his friends) and Hacker are on a bus ride to Detroit, discussing alien possibilities as they travel to be wed. Although narrator of sorts Jewel reminds us that they are imaginative constructs based on real events, there is a realism to these historical scenes that make them engaging beyond the futuristic visions anticipated by its reduced Roundhouse Theatre space’s gleaming cubist and minimalist staging, shadowed by imposing image of a giant red star. 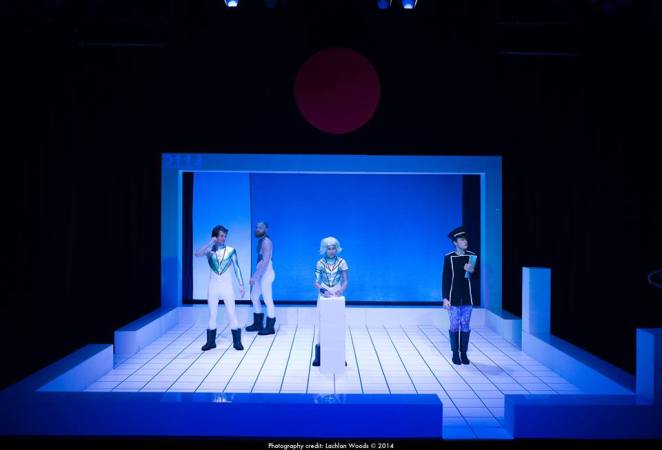 Fast forward to 1964 and Delany (Ray Chong-Nee) hears his future protagonist, linguist, poet, and telepath Rydra Wong (Ngoc Phan) for the first time. Fast forward much further to 2114 and the audience is also introduced to the starship captain, on mission to crack a linguistic code to prevent an alien invasion. By its own admission, this is a complicated story as the two stories interweave. “Strap in,” the mysterious Jewel (Emily Tomlins) tells us from the outset. At times this impedes audience appreciation, necessitating excessive character explanation about hyperspace battles and weaponry and the nature of the Babel-17 language. While precise and interesting (the dialect of Babel-17 includes the absence of a pronoun or any other construction for ‘I’), language is sometimes shared in cumbersome combinations of excellent but difficult questions. 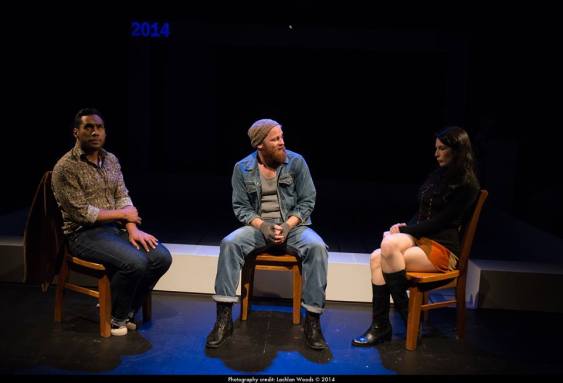 Cast members all offer assured performances in a multitude of roles, often changing in a flash before audience eyes. In particular, Chong-Nee is charismatic in his portrayal of Delany and Tom Dent is memorable in role as an ex-con drifter and fling Bob, brought home by Delany. The performances are not enough, however, to distract focus from the laboriousness of the 110-minute show’s later sections which could see the narrative ending many times over. While there are some wonderful moments when the two stories intersect, for example when author meets character, judicious editing could help to maintain audience interest. There are times too when the simultaneous beauty and intellect of its tightly-packed language and ideas are diluted by base comic lines like “he’s really old; he’s 25.”

It is rare to see science fiction on the theatrical stage lest it may seem absurdist or overcomplicated. And “The Motion of Light in Water” sometimes serves as testament to this. However, as Jewel wisely notes to audiences, to progress, we must learn to simultaneously see multiple points of view. Just as different people generate different thinking, different theatre can usually generate diffident audience interest. In many ways the notion of ‘The Motion ‘ is a provocative tribute to the power of speculative sci-fi fiction  and, as promised under the La Boite Indie label, bold, new and surprising. Like the genre it re-imagines, however, it will not be to everyone’s liking.