Little Ones Theatre’s adaptation of “Dangerous Liaisons”, Pierre Choderlos de Laclos’ 18th-century satirical story of manipulation and sexual exploits, is an ambitious undertaking…. fully realised in opulent, over-the-top glory as part of Melt: A Celebration of Queer Arts and Culture at the Brisbane Powerhouse.

Published just years before the French Revolution, Laclos’s episodic novel of moral and emotional depravity is a disturbing and ultimately damning portrayal of a decadent society, known more popularly though its 1988 film. Scorned for the first time by a lover, aristocrat Marquise de Merteuil (Alex Aldrich) enlists former-lover Vicomte de Valmont (Janine Watson) to seduce the dumper’s virgin bride-to-be, Cecile (Amanda McGregor), daughter of Merteuil’s friend, Madame de Volanges (Zoe Boesen).  Ever the lothario, Valmont is more focussed on an attempted conquest of the virtuous Madame de Tourvel (Brigid Gallacher), a woman famous for strict morals, religious fervor and the happiness of her marriage. The sophisticated game of seduction and manipulation that ensures serves to bring amusement to the pair’s jaded existences and mercilessly destroys the lives of those around them, all for their own gratification.

Reflecting their indulgent, luxurious world, staging is opulent to the extreme – a simple yet striking sea of glisten, draped by glittering gold curtains and with an embossed gold stage, bare apart from three pieces of gold Baroque furniture. The French court costumes are also impressively garish in their head-to-toe, often sheer and revealing, pinkness in its every shade. 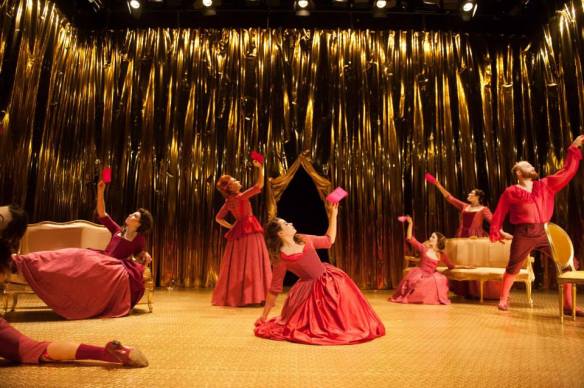 The almost exclusively female cast, look and sound the part, with their heaving bosoms, whitened faces, rosy cheeks and rounded British vowels. It’s kind of like a French “The Importance of Being Earnest” with an aunt in the country and plenty of puns, filled in this case with sexual innuendo. And like W!ld Rice’s Earnest all-male ensemble take on that literary classic, this “Dangerous Liaisons” provides a new take on the text. If anything, the gender-bending role-play only highlights the language of script, offering a dominant feminist discourse in its presentation of passages about the roles of women in life and marriage.

As with their hilarious “Psycho Beach Party”, a highlight of 2013’s Brisbane Festival, Little Ones Theatre have extracted every possibility for camp exaggeration from the work. Double entendres abound and virtually every line is laden with sexual innuendo. With nod to the populist Moliere farcical comic performance style of the era, movement is stylised with deliberate mechanicalism and the animation of dialogue delivery is timed to exaggerated perfection with an almost pantomime-like comic effect. 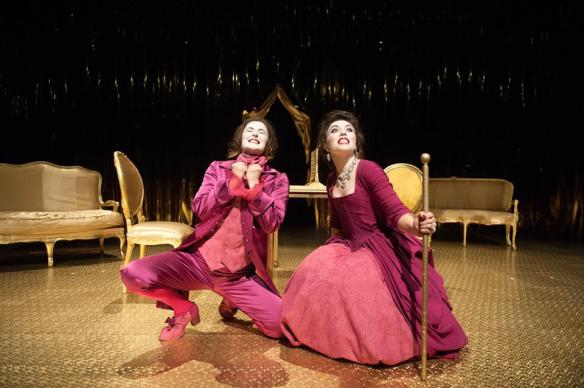 Although all cast members are creditable in their performances, the interplay between the two leads is most notable. Aldrich plays up the role of Merteuil to perfection, saying so much through even the smallest of traits, including some extravagant bitch-faces to rival even Alexis Carrington of “Dynasty” fame. And Watson is every bit the swaggering, seductive and unprincipled Valmont. The eroticised gender-bending, chosen in reflection of the traditions of the French Clandestine Theatre movement, is barely an issue, apart from how out-of-place it makes Tom Dent, the play’s only male cast member, seem as Cecile’s courtier Danceny.

With the addition of a glorious booming soundtrack of songs entirely at odds with its pre-revolutionary French setting (think Chaka Khan and Chris Isaac, for example), Act One, in particular, is a glorious ride. In its more talky Act Two, there are less laughs as masks of white are whipped off and characters become more tortured. In each instance, familiarity with the story’s previous incantations in not a prerequisite to appreciation.

For a dynamic night of theatre, you can’t go past this high-camp take on the debaucherous tale of deception. Amoral as the story might be, the elements of this production are all of the up-most quality and I cannot wait to see what these purveyors of high camp bring to Brisbane next.