‘Boy meets girl meets iceberg’…. turns out that the premise of James Cameron’s 1997 epic melodrama, “Titanic” is actually one laden with levity, as seen in “Titanic: The Movie, The Play”.  The love story of aristocratic Rose and poor artist Jack aboard the ill-fated passenger liner is making its maiden voyage at the Brisbane Comedy Festival courtesy of Act/React, the Brisbane-based comedy troupe behind the hit “Speed The Movie The Play”.

Although the movie’s source material is condensed from 3+ hours into a palatable 60 minute interactive 3-D experience, all of the key scenes appear in Jack and Rose’s fraternisation despite being passengers of different classes – Jack teaches Rose to fly, Rose poses nude for Jack’s sketching and then uses an axe to free him from his handcuffed confine and then there is that steamy sex scene signalled by hand to a car window. There is even appearance from Celine to croon of how her heart will go on from atop the impressive set, built from scratch by volunteers from the Queensland Maritime Museum.

Jokes are generated from more than just its movie namesake source material. Those familiar with Leonardo DiCaprio and Billy Zane’s respective film catalogues will find fun in recognition of the script’s many, clever inset references. Indeed, it is the smallest details that provide much of the show’s humour – from the Oscar stuffed in Jack’s bindle to the iceberg’s ‘How’s my driving?’ bumper sticker.

Despite its watchmen’s best hair-dryer efforts, the rogue iceberg seems set to ruin the ocean liner’s unsinkable reputation and as audience members join the band of musicians, others are soon strapping on life jackets and abandoning ship into the three full sized lifeboats leaving behind Jack and Rose to try and remain afloat. 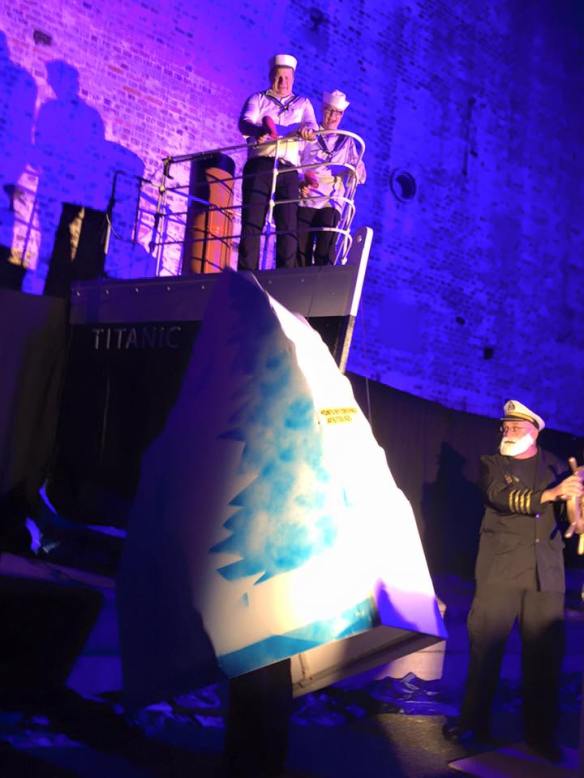 In the hands of director and co-writer Greg Rowbotham  this shameless homage to the most epic romance of the ‘90s is high energy and heaps of fun (and not just in its ‘fun facts’) and therein lies its appeal. Audience interaction is positive and without pressure (although you might have to show off some signature dance moves).

“Titanic: The Movie, The Play” is a hilarious heap of absurdism and great for a group outing that could be become every person for themselves with some ending up in first class and some in steerage. For a guaranteed night to remember of non-stop face-aching laughter, do not miss the boat in securing a place on board this most inventive voyage. It will not only serve as reminder of how fun theatre can be, but also the delight of the greatness that was Billy Zane.