Jonathan Larson’s ‘90s musical “Rent” is a modern classic of the type that has people returning to see its original Broadway run more than once (or maybe that was just me). So to see its bohemian brilliance on show, as is the case with Beenleigh Theatre Group’s compelling take, is always a pleasure.

“Rent” is a glorious work, or rather rework of Puccini’s popular opera “La Boheme”, set in the Lower East Side of New York. Its celebratory portrayal of a group of poor artists and addicts living hungry and frozen under constant shadow of AIDS was ground-breaking in contrast to the then traditionally conservative nature of most musicals. But times have changed and although the work is still full of vitality and poignancy, its effect is far less hard-hitting. What remains, despite the tyranny of time, is the appeal of its musical score, full of refrains of its memorable numbers.

Accordingly, the lengthy show is full of musical highlights including lovers’ duet ‘Take Me or Leave Me’ between Maureen (Allison Nipperess) and Joanne (Morgan Garrity) and Joanne’s duet with Maureen’s former lover Mark (William Boyd), ‘Tango: Maureen’, featuring not just some powerhouse voices, but a showcase of the performers’ comic timing. The ultimate, however, is the fabulous ensemble delivery of ‘La Vie Boheme’ which is choreographed to perfection to provide a vibrant visual tableaux in support of the two-part celebration of bohemianism and its ideas, trends and symbols. 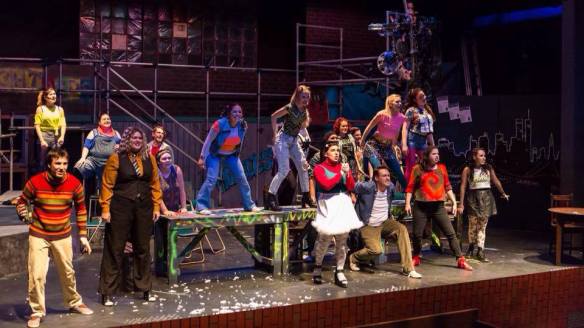 Performers showcase varying vocal ability but are all energetic in performance. Boyd anchors the show as its pseudo-narrator, struggling documentary filmmaker Mark Cohen. Not wanting to sell out to the mainstream film industry her prefers to view the world through a lens than engage in it, conveying an everyman sense of awkwardness. As his roommate Roger, a struggling musician who is HIV positive, Travis Holmes is first-rate. His musical hope to write one meaningful song to leave behind, ‘One Song Glory’ is outstanding and, unfortunately, his duets with Emily Corkeron as his love interest Mimi, suffer because of his comparative excellence. Indeed, her voice, while capable, does not seem to have the sustained power required to belt out her attempt to go ‘Out Tonight’ and seduce Roger, meaning that the potentially show-stopping number falls flat amidst an array of Act One highlights.

As the sweet and generous young drag queen and street percussionist Angel Dumott Schunard, Alex Watson takes the audience on an emotional journey from joy to sorrow and although his ‘Today 4 U’ musical boast is breathy in its energy, the chemistry between him and Matthew Dunne as his love interest, computer genius, professor and vagabond anarchist Tom Collins, is endearing, particularly in their lovely number ‘I’ll Cover You’. As sassy performance artist Maureen Johnson, Allison Nipperess is not only of strong voice but expressive to delicious comic effect, particularly in delivery of the performance piece ‘Over the Moon’.

Set design serves the space well, using scaffolding and platforms to recreate the gritty look of New York City’s East Village in the thriving days of Bohemian Alphabet City, including transforming a section of the auditorium floor to become a New York subway. Especially considering the size of its ensemble cast of over two dozen performers, choreography is impressive in its seamlessness, particularly in its many ‘big’ numbers. Poignant parts are handled well too, allowing for the tragic ramifications of its narratives to be sensitively realised in Act Two.

Although somewhat sanitised, Beenleigh Theatre Group’s “Rent” is a wonderful example of ensemble theatre at its best, with all elements combining in performance as passionate as the story’s characters. The company should be congratulated on their bravery of musical choice and dynamic application to all aspects of the production.