Let’s start at the very beginning, a very good place to start… I have never been a fan of “The Sound of Music”, which puts me in the minority of musical theatre enthusiasts; thanks to the 1965 movie starring Julie Andrews and Christopher Plummer, it has become a worldwide phenomenon. However, experience of the lavish London Palladium production’s Australian tour has left me of much-changed mind.

The story begins in 1930s Austria when wayward nun-novice Maria (Amy Lehpaer) is sent by The Mother Abbess (Jacqueline Dark) to act as governess to the seven children of widowed naval captain, Georg von Trapp (Cameron Daddo). Her genuine, fun-loving nature endears her to the children and eventually their father, despite his courtship of Baroness Schraeder (Marina Prior).Meanwhile, Nazism and the eventual occupation of Austria by Germany is casting a shadow over all their lives. The Captain is fiercely patriotic and cannot agree with the Baroness, or his friend Max (David James), about acquiescence to the inevitable German takeover. As the family’s predicament becomes more dangerous, Max persuades the now-married Captain to sing with the family at the Salzburg music festival, during which they escape. It’s not a joyful story, yet it’s a joyous experience, thanks particularly to the children whose presence make for an early Act One highlight in a show-stopping, spritely ‘Do-Re-Mi’.

This is a show filled with the nostalgic appeal of catchy melodies brought to live musical life by a wonderfully rich sounding orchestra. Indeed, with its memorable Rodgers and Hammerstein score it is able to touch the hearts of all ages with songs such as ‘My Favourite Things’, ‘Sixteen Going on Seventeen’, and of course its powerful title tune.

While as cute as ever (with the youngest Von Trapp, Gretl often stealing her scenes), the children do an excellent job, bringing a modern sensibility that adds to the laughs. As the ‘Sixteen Going on Seventeen’ eldest child Liesel, Stefanie Jones is strong in her characterisation of a girl determined to be regarded as an adult. When she sneaks out to meet love interest Rolf (Du Toit Bredenkamp) in the courtyard of the family’s estate, their duet not only addresses the timeless theme of young love, but contains some beautiful dance moves with a lyricism like that of the ballet in “An American in Paris”. Each of the other six children is played by three performers. The outstanding opening night children’s cast was Luke Harrison as Friedrich, Sophie Moman as Louisa, Sam Green as Kurt, Emma Cobb as Brigitta, Amelia Ayris as Marta and Dana Weaver as Gretl.

As their father, Daddo is imposing as the ‘very Austrian’ Captain. While stoic, he lacks full conveyance of the character’s militaristic traits, but certainly succeeds in conveying his warmer side. Although his voice is light and soft in tone, his ‘Edelweiss’ makes for a poignant musical moment. As the honest and spontaneous Maria, Lehpamer is utterly delightful, sweet, but not overly so, and of consistent vocal prowess. Opera Australia principal, mezzo-soprano Dark is excellent as The Mother Abbess, giving a goosebumpy take on ‘Climb Every Mountain’ to transport the story to the next emotional level. 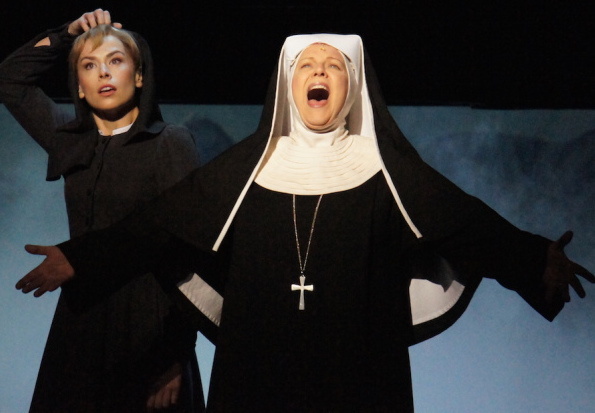 The show features a large cast with no weak links. Lorraine Bayly brings warmth to the role of housekeeper Frau Schmidt. As the Captain’s wealthy and sophisticated would-be fiancée, Prior is beautiful and reliable in voice and characterisation. And James brings an energy to his role as Max Detweiler, Captain von Trapp’s friend, a music agent and producer. 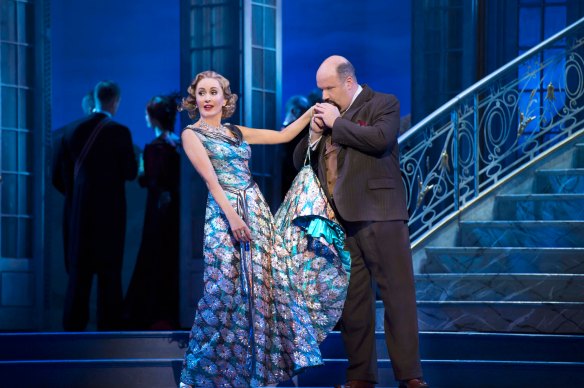 Costumes work well to aid to characterisation capturing Maria’s folksy simplicity equally as well as opulent dinner party dress. Staging is sumptuous, filled with a luscious lighting design to take audiences across the spectrum of skies from dawn to dusk and evening, and providing a memorable final tableau image of the family escaping over the mountains towards Switzerland.

Clever design contrasts not only the lushness of the outdoors with pale and comparatively stark interiors, but the curves of nature with straight lines of the abbey and house. And scene changes are all smooth, moving the audience on to each new location with a movie-like swiftness. For example, after a lengthy first half full of highlights, when the mood is darkened by matters of the state with the Nazi occupation of Austria, it is captured discomfortingly as stormtroopers swoop into place and imposingly large red swastika banners unfurl.

It has been said that the best indicator of a show’s merit is if a reviewer would go back independently to watch it again. If this is the case, “The Sound of Music” is indeed a meritorious production, visually stunning, full of streamlined energy and bursting with marvellous musical moments. Its vibrancy is a tonic to the senses of the everyday, making it a musical not to be missed.