“The Rabbits” is a tragic tale of colonisation based on John Marsden’s iconic, award-winning children’s story, with Shaun Tan’s illustrations. Marsupials (not unlike Australia’s numbats) are the indigenous inhabitants of a land which is destructively colonised by invading Rabbits from the moment a Scientist rabbit first scoops up a lizard in one of its opening scenes.

Although allegorical, the fable is deliberately not made specific to Aboriginal experience. Clearly, however, its reference is to Australian history, ensuring that no adult audience member is confused as to its comment on our nation’s troubled history. As initially friendly and curious interactions darken, the work is filled with powerful moments, none more so than when the marsupial’s babies are taken from their mothers’ arms and sent away on white box kites, to the most haunting and emotional of the soundtrack’s numbers, ‘Kitesong’. Indeed, allusions to government policies and actions are sensitively handled so as to be portrayed with poignancy more than trauma, which befits its position as a work for young people.

The opera features original contemporary compositions by Brisbane’s own Kate Miller-Heidke with additional music by Iain Grandage. As an opulently-costumed Bird, perched upon a rock face, Miller-Heidke watches and empathises as narrator, like the birds of the original picture book, present and observing but not interfering in what is not a traditional linear opera. Her voice is ethereal in its beauty, showcasing echoes of Baroque as it soars to the heights of the Playhouse Theatre. 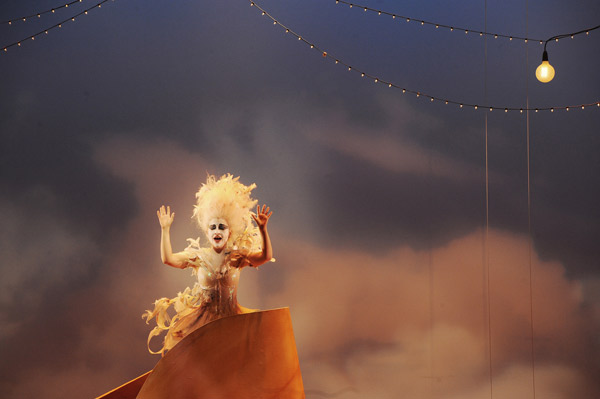 The score is a glorious mix of genres that often echoes the sounds of the Australian countryside and has clever in-built touches like hint of national anthem within one segment. The band of five accomplished musicians, led by Music Director Isaac Hayward are positioned at the rear, onstage, but are appropriately showcased during an early jaunty jig type numbers of sailor celebrations of carrot juice, which is not to the marsupials’ tastes.

In support of Lally Katz’s libretto, performances are all outstanding. Early scenes showcase strong sounds of the invading rabbits (Opera Australia veteran Robert Mitchell as the  Captain, Simon Meadows as Lieutenant, Nicholas Jones as Society Rabbit, Christopher Hillier as Convict and Kanen Breen as Scientist), singing largely in quintets but also within some solo, often comical, moments in their Gilbert and Sullivan sense of ceremony. And the marsupials’ story is shared with humanity at the hands of Hollie Andrew, Jessica Hitchcock, Lisa Maza, Marcus Corowa and David Leha.

Storytelling is sparse, in keeping with its source material, allowing for spaces to be filled by its stunning staging. Gabriela Tylesova’s costumes bring the book’s visuals to exaggerated, imaginative life, at once adding comedy and enhancing its appeal to younger audience members able to experience their picture book experience brought to theatrical life. Literal lighting floods the stage with green when the rabbits are feeling queasy and with red in representation of the frontier wars, before transitioning towards a bright light of hope as Rabbit and Marsupial look into a pool together.

Since its immediately-successful premiere at the Perth International Arts Festival in February 2015, “The Rabbits” has been acclaimed not only as an important new operatic work, but as a show sure to introduce a new, younger generation to the imaginary world of musical storytelling. With its universal themes and palatable 60 minute length, it is an accessible, sometimes comically-absurd stimulus for reflection of from where we as Australians have come and where we are heading.