One Was Nude and One Wore Tails

A garbage man, a flower seller and a policeman, meet on the street. It’s not start of a joke, but it still has a very funny outcome, along with its comment on the pretensions of social class, identity and status. This is the beginnings of the premise of Dario Fo’s one-act farce, brought to life by independent theatre company, Room to Play. Throw in a naked ambassador who has taken refuge in a rubbish bin and you have the ingredients of a very funny show. 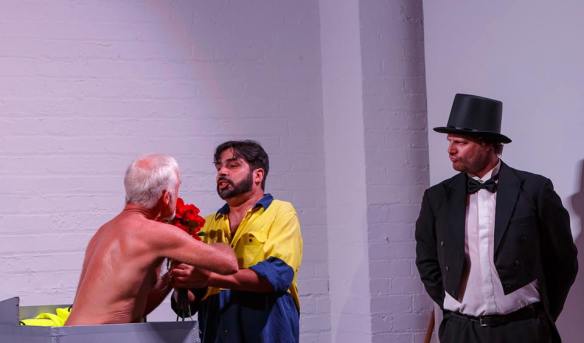 It begins with two council workers, played by Matthew Filkins and Colin Smith, passing the time with an in-depth discussion about divinity. While one is being charmed by a woman (Elise Grieg), the other discovers a naked man (Jack Henry) hidden inside his rubbish bin, forced as the stowaway has been to take refuge during rapid escape from the scene of a love affair. All sorts of silliness ensues when an oblivious policeman comes upon the scene in the form of Ben Warren, complete with pig snout and snorts to punctuate his dialogue.

Each of the five cast members is impressive in performance, particularly as things progress to all sorts of crazy chaos, never missing a beat in their banter. Colin Smith anchors the show as the most everyman of the over-the-top characters, playing particularly well against Ben Warren, who is, himself, notably impressive in his physicality and necessitated over-the-top characterisation. 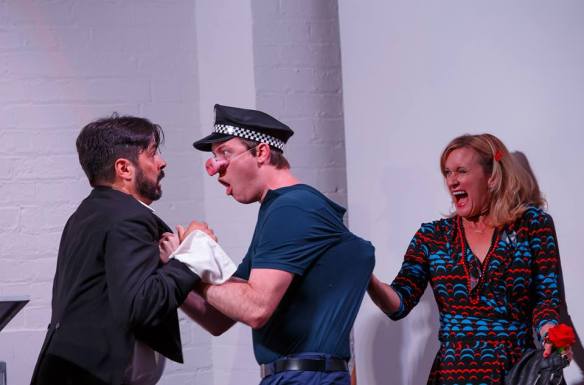 Although it starts with philosophical ponderings about how being a nothing, makes one the beginning of everything, and thus divine, don’t be fooled that “One Was Nude and One Wore Tails” is not going to provide anything but mayhem in its tightly-woven 50ish minutes running time (a palatable length even for non-farce-fans). From its opening ocker moments of song to cement it within its Australian context, this show is out outlandishly out of control (#inagoodway) and while consideration of its themes about the role of clothing in definition of our treatment within society can result, this focus in not necessary for its appreciation and enjoyment. Indeed, with its clowning, slapstick and vaudeville sensibility, the show has much to offer all range of audience members and, as such, serves as an Anywhere Festival highlight.

You can find all of my Anywhere Festival reviews on the festival website.