Ballet Preljocaj’s “Snow White” prologue is a childbirth scene as The Mother (Lea de Natale) crosses the stage through swirling smoke before clutching her pregnant belly, violently giving birth and dying, leaving the infant Snow White to be taken from her arms by The King (Simon Ripert). From the early scenes of courtly dance in celebration of Snow’s White’s (Emile Lalande) coming of age that follow, audiences could easily suspect a traditional ballet take on the Grimm Brothers’ dark 1812 fable. Instead, what ensues injects modern dance into the traditional ballet structure in an inventive, visually-impressive contemporary ballet experience. 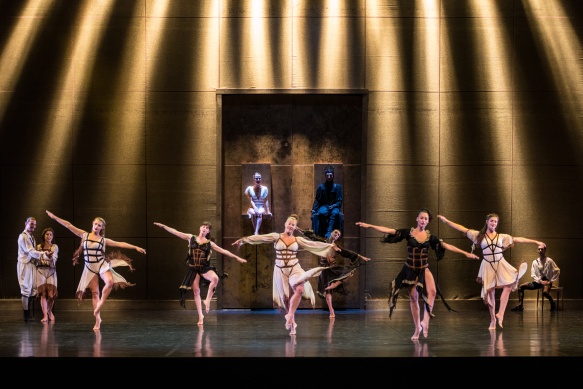 Design does a lot of the storytelling. The transitions between Snow White’s different selves, not only swift the story along though her childhood and adolescence, but offer early tease of the cleverness to come when the Evil Queen (Cecilia Torres Morillo) seeks to discover who in the land is the fairest of them all and looks into an imposing giant mirror to have Snow White’s whereabouts revealed.

Thierry Leproust’s set design features full use of the Lyric Theatre stage’s space, with massive sets and spectacular scenery. When the Queen subsequently sends woodsmen to kill Snow White, it is into a dark forest of imposing foliage and Patrick Riou’s moody, mottled lighting that juxtaposes with earlier nymphish imagery of barely-clad bodies lying atop rocks in a Midsummer Night’s dream aesthetic. The creativity continues to the show’s amazing costumes by legendary Haute Couture designer Jean Paul Gaultier, which convey a visual dichotomy of colours and shapes between the imposing Queen, in black dominatrix dress and the vulnerable Snow White, whose costume flows in dance of its own around her body with each movement. 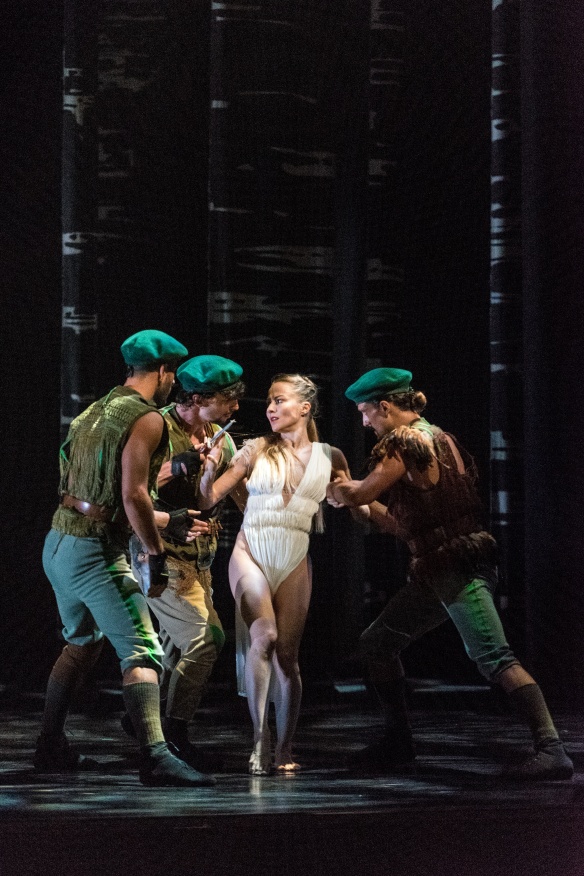 Angelin Preljocaj’s choreography is similarly both severe and sensual in its suitability for the narrative ballet. From their finitial flirtatious meeting and tumbling duet towards first kiss, Snow White and The Prince (Redi Shtylla) take audiences on an engaging journey plentiful with highlights, such as when they move intertwined with each other at once without and then again with music. Similarly memorable is when the Prince tries to awake the ‘dead’ Snow White, ‘dancing’ with her passively limp body. There are some light-hearted moments too through the stepmother’s cats who prance and prowl about the place. Especially superb, however, are the seven dwarves, whose entrance, abseiling down a mountain in an outstanding aerial ballet, is so magnificent as to evoke audible audience reactions. 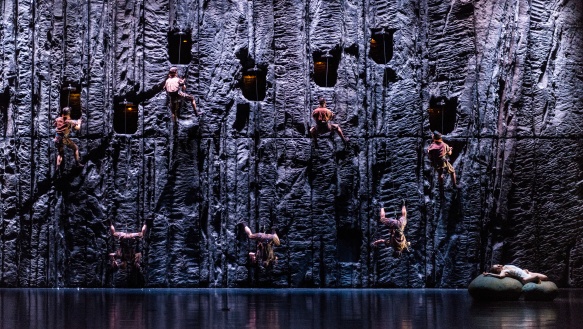 The troupe of 25 dancers are all striking in their movements, whether they be playful, sensual or strong, demonstrating energy, emotion and space. As Snow White, Lalande moves with focus and precision. And when in partnership with Shtylla, their trysts contain smooth lines, repeated with swelling energy. Gustav Mahler’s symphonies, performed by the Queensland Symphony Orchestra, provide a vibrant score of both gentleness and assault with woodwind sounds, in particular, bringing a sublimity to the tranquil forest scenes.

“Snow White” is without real precedent in ballet, meaning that when developing the work, Preljocaj could essentially make it their own finest version of itself. And this sumptuous production’s inventive stagecraft surely does this. It has been said that it is never just about the dance with ballet, and this is certainly true of this work, for it is the rich aesthetic created by the choreography, costumes and sets that makes the work so stunningly beautiful. For Brisbane to play host to its Australian debut as the next instalment of the QPAC International Series, is indeed an honour that should be celebrated by all fans of all things artistic, for its appeal lines beyond just its ballet genre.