Brisbane’s iconic cabaret institution “Women in Voice” is about celebrating individuality of entertainers from different musical backgrounds and generations. As such, its performers not only become backup for each other’s numbers, but are left to independently select songs. …. All except Bethan Ellsmore who has stepped in to the show as replacement for Sahara Beck at only 24 hours’ notice. Joining this year’s formidable line up of talented soloists, Alicia Cush, Leah Cotterell and Allison St Ledger, Ellsmore provides a pure-voiced set of songs beginning with a beautiful take of Split Enz’s ‘I Hope I Never’ and soon has the audience swaying along to the sounds of ‘Blue Velvet’. It is a selection that sits well against the night’s eclectic musical line-up.

The show opens with a melodic take on The Church’s signature ‘Under The Milky Way’, as Alicia Cush takes the audience through a musical study of home. Proving her immense talent, she transports listeners through operatic highs and smooth country sounds before finishing with a jazzy Bublé number, inset with her own flute solo.  The soulful Leah Cotterell then roars the audience to intermission in a set that includes a mix of original and well-known numbers… including another Oz-rock classic with The Angels’ ‘Am I Ever Gonna See Your Face Again’, complete with expletive-laden audience response.

The packed opening night audience, full of ‘girls night out’ groups, loved every minute of music and more. As emcee, Judy Hainsworth entertains in jester role, complete with changing brightly coloured, motley costume, taking the audience on a tongue-in-cheer tour of the year that has been and a musical recap of the life of a performer on tour, amongst other journeys. Transporting audiences to another time or place is part of the magic of live performance and the show’s final set, from “Women in Voice” royalty Alison St Ledger, does exactly this as she takes the audience on a fabulously fun trip down retro-memory lane to Jackson Five and Bee Gee boogie, completed with disco dudette while suit. 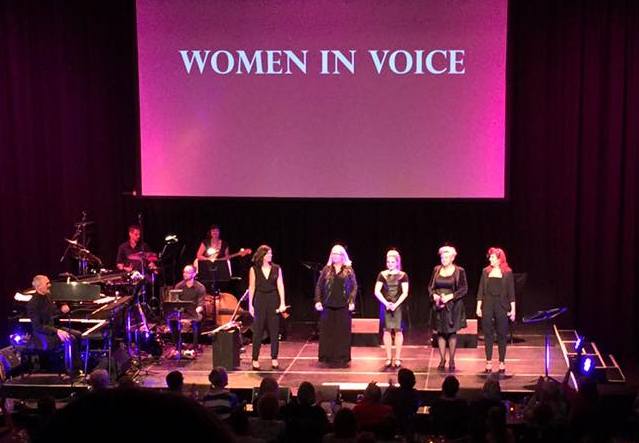 As always, “Women in Voice” is an immensely entertaining musical experience, thanks also to the accomplished live band (under Musical Director Stephen Russell). When the superlative songstresses come together to look towards the good things to come in a concluding Cat Stevens’ ‘Peace Train’ it is a glorious, goosebumpy moment proving that more than just another song concert, “Women in Voice” is a celebration of talent, that, like any good celebration, is best enjoyed when shared with ‘the more the merrier’ as a mantra.