If I were to have one criticism of “Pearl River Delta Dance”, I’d have two – it is only 70 minutes long and is a one-night only show. The work, which has come direct from the Guangdong Festival features as part of Brisbane’s inaugural SUPERCELL: Festival of Contemporary Dance where it not only serves as a highlight among the packed program of local and international artists, performances, workshops and conversations, but invigorates audience experience with new discoveries within the genre.

It’s smorgasbord of diverse dance vignettes from China and Macau companies Guangdong Modern Dance Company (the first professional modern dance company founded in 1992 which has had a longstanding collaboration with Brisbane’s Expressions dance company), Max Dance Hall and Stella & Artists, the show platforms some the most progressive of Chinese talent emerging from the Pearl River Delta region, but leaves audiences with much to consider about both is political and everyday themes.

Things begin with the main piece, Guangdong Modern Dance Company’s performance of an iteration of the full-length work ‘Piece One’ by Li Pian Pian and Tan Yuan Bo. It’s traditional in type and almost classical ballet-like in the fluidity of the unison of interaction between its two performers Liu Qing-yu and He Min. There is a subtle but commanding synergy to the kaleidoscope of the duo’s movements in interaction with each other in motion, even down their every step of entrance and exit from the space.

In contrast to this initial serenity, the program continues with some altogether different sensibilities in the smaller, almost sketch-like experimental segments from Macau companies Stella & Artists and Max Dance Hall. Rather than being introspective, ‘Four Legs is Good, Two Legs is Better’ focusses on the relationship between the individual and society, in particular the theme of class inequality, as implied by the Orwellian phraseology of its title. Despite its sparse staging, it is a visually arresting piece as performer (and choreographer) Albert Garcia appears costumed in contrasts; his upper body is adorned in ancient aristocratic dress while his lower body is in boxer shorts. Although he lip-syncs and moves to classical music, he does so without complete cultural heritage, in mockery of the vulgarity of society’s strata as symbolised by the different levelled tables with which he interacts. As things move from the operatic to the more organic, silence itself deliberates as rhythm and complement to his heightened, lithe physical expression.

Stella & Artists’ ‘The Sun Rises As Usual’ also relies of silence as it builds layers of movement, patterned through repetition, as the audience watches on, also exposed as part of the performance due to the raised house lights. Pushing herself to fatigue, performer (and choreographer) Lou Hio-mei makes attempt to expose the layered and sometimes laboured nature of emotions. With deliberate repetition of training actions, a movement of handstand, flip and bridge is repeated with impressive stamina, strength and skill to become a sequenced action before, finally, to the pomp and circumstance of an imperial soundscape she transforms in joyous, smiling, excited discovery of the sun

‘The Hands’, by Macau’s Max Dance Hall is something very special. The engrossing duet is a work to savour as its slick machine-like choreography interlocks its performers Kaman Ng and Lao Pui Lon in transition from a (as self-introduced) fake journalist news segment outline of milestones since 1967 to exchange of little stories, beautifully sad in their recount, using their bodies’ natural lines and energy to create new movements. Through sassy reaction and the bewilderment of playful bubbles, their roles change in nurture but their synergy, as evidenced by mirroring and counter of each other’s moves, draws them back to coordination. The soundscape for this piece in particular is a real highlight in its power, pulse and hum with music memorably including Bakermat’s ‘One Day (Vandaag)’, including integrated sample of Martin Luther King Jrn’s ‘I Have a Dream’ speech. 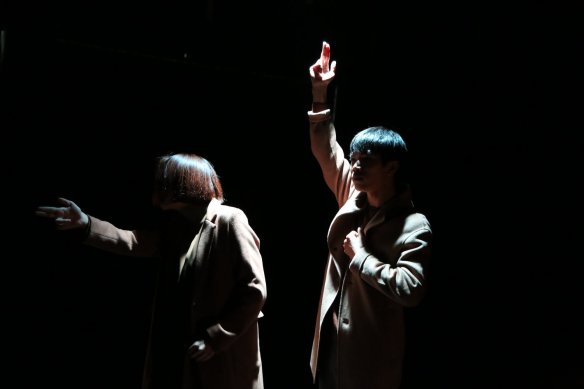 In terms of high-calibre performances, “Pearl River Delta Dance” is up there with best, most versatile and vigorous dance bills around and its inclusion in SUPERCELL should be applauded. Its presence shows how festivals such as this not only expand the communication spaces of companies, but allow more universal exposure to the cultural themes and commentary on offer and application of a global context lens of interpretation, which is so important in counter to the comfort of insular imaginations.