Strangely, upon entrance to “The Play That Goes Wrong”, there is near-silence as everyone watches an audience member who has joined those on stage to assist with fixing the set’s mantelpiece. The oddness of it becomes apparent only later, not when the mantelpiece collapses mid-show, but upon realisation that these initial minutes are the only time during the entire evening that the Concert Hall is quiet, because barely a moment passes of its duration when the air is not filled with big belly-laughs and riotous roars (not giggles though, for this is a show so consistently hilarious as to foster more than tee-hee titterings).

After a quick introduction from the President of the Cornley Polytechnic Dramatic Society, the play within a play, ‘Murder at Haversham Manor’ starts with a bang… or maybe it is poison or strangulation that has caused untimely death of the Manor’s Lord, Charles Haversham (Darcy Brown as Jonathan Harris). This is what the cast of characters set out to uncover in their presentation of a murder thriller that is meant to be up there with Agatha Christie’s “The Mousetrap”. Unfortunately, however, their attempts result in a show that is more chaotic than critically-acclaimed.

Doors are locked, the walls of the lavish and intricate set wobble and objects fall to the ground. “This set is a bloody deathtrap!” observes one of the creatives. But, the show, as they say, must go on, so forgotten lines are improvised and missing props are replaced in hope that the audience may not notice, such is the actors’ determination that the play will progress, despite the bodies that are banged about in the process. The result is the most manic of farces, full not just of physical humour but a plethora of puns and malapropisms and, at one stage, a warped speed dialogue loop. 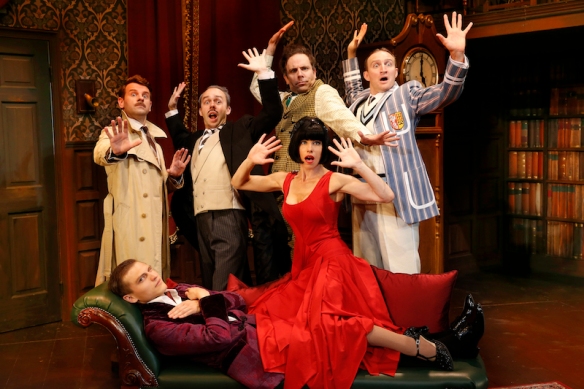 ‘Tom Cruise will not be appearing’, foyer signs remind us, but Brooke Satchwell does, as Sandra who plays the hysterical but still narcissistic Florence, fiancé to the deceased. And she is as funny as ever, especially when, as Sandra, she fights stage manager Annie (Tammy Weller), with all the combative manoeuvres and theatrics of a couple of pro-wrestlers. Indeed, all cast members offer incredible physical performances, never waning in energy for the show’s two hour(ish) duration. This leads to a cascade of comical scenes with setups as funny as their executions thanks to the show’s polished choreography and perfect comic timing. James Marlowe, from the London cast is excellent as Max (aka Cecil Haversham, the dead man’s brother), however, the most side-splitting moments emerge from the sight gags associated with the portrayal of Charles’ dead body. 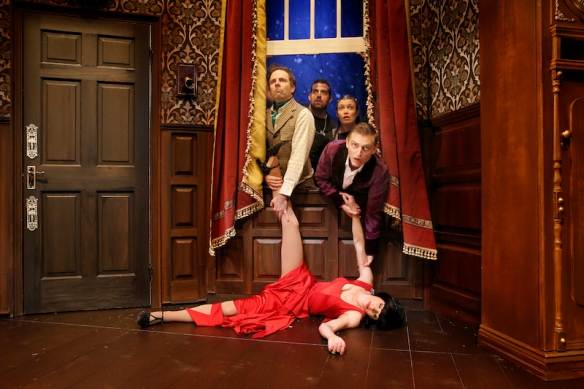 Of course there is a plot in there somewhere, but this show is about far more than a pesky plot. The story is, instead, incidental to the incompetence of those in whose hands the play goes wrong. Given the absolute hilarity of its slapstick style of comedy, it is easy to affirm the play’s 2015 Olivier Award for Best New Comedy. This is comedy done right, enhanced by a simplicity of concept that gives it a breath of all-ages appeal. While the show’s website may instruct you to ‘save money (don’t come)’, really, this is an infectiously funny show, not to be missed by anyone who wants to laugh until it hurts.