With a spotlight cabaret seating section and shadowed stage, the preshow aesthetic of “Lady Beatle” is of Liverpoolian grey, like through the eyes of a ladybird. This is the Lonely Hearts Club, soon to be coloured with the music of the Beatles as Naomi Price bursts forth with the penultimate ‘Sgt. Pepper’s Lonely Hearts Club Band’, and its hope that we will enjoy the show. It’s a particularly appropriate initial number given that opening night marks the 50th anniversary of the band’s innovative, ground-breaking album Sgt. Pepper’s Lonely Hearts Club Band.

Over the following 70 minutes, UK-born star Naomi Price proceeds to tell a story, but probably not the one you think you are going to hear, a story that includes tell of the lucky Lady Beetle and so much more, in nod to her personal Liverpoolian roots. Her assumed Scouse accent certainly adds to the authenticity of the experience, however, what makes the show truly engaging is her banter with the audience that is so central to a quality cabaret experience. There is a lot of comedy, much of it at George Harrison’s expense, but also surprising poignancy. However, it’s not Naomi guiding audiences through this Beatles story, but their number one fan, an ultimate outsider who loves the Beatles (even George) more than anyone.

The kaleidoscopic soundtrack is full of highlights, thanks to the show’s incredible live music and new song arrangements, like a stripped back and absolutely beautiful, nostalgic ‘Penny Lane’, allowing the song’s story of a street near John Lennon’s childhood home, to take centre stage. The comprehensive coverage of the group’s extensive catalogue ensures that the show is packed full of favourites and there is even a rocking medley to end the night on the highest of highs. 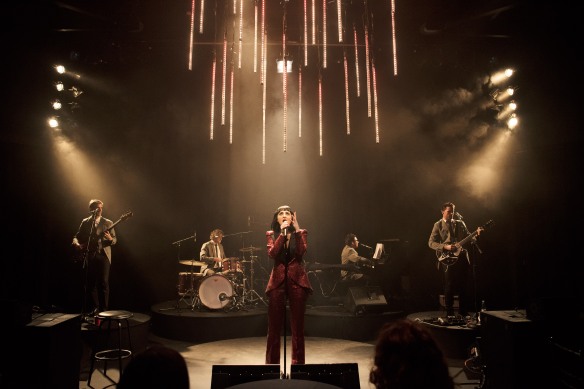 In support of Price, the virtuosic band is uniformly excellent, and it is wonderful to see drummer Mick Easterman, bass guitarist Andrew Johnson, pianist Michael Manikus and guitarist Jason McGregor given their own moments to shine, such when ‘the band begins to play’ in ‘Yellow Submarine’ and in a rocking medley mix of ‘Helter Skelter’ and ‘Revolution’ with ‘Love Me Do’, ‘She Loves You’ and ‘Let It Be’. On paper, mixes like this shouldn’t probably blend, but in this show’s hands they do, meaning that ‘Strawberry Fields’ sits comfortably alongside a clap-along ‘Hey Jude’. And the result is a superb soundtrack, befitting the dynamic performer leading the stage. 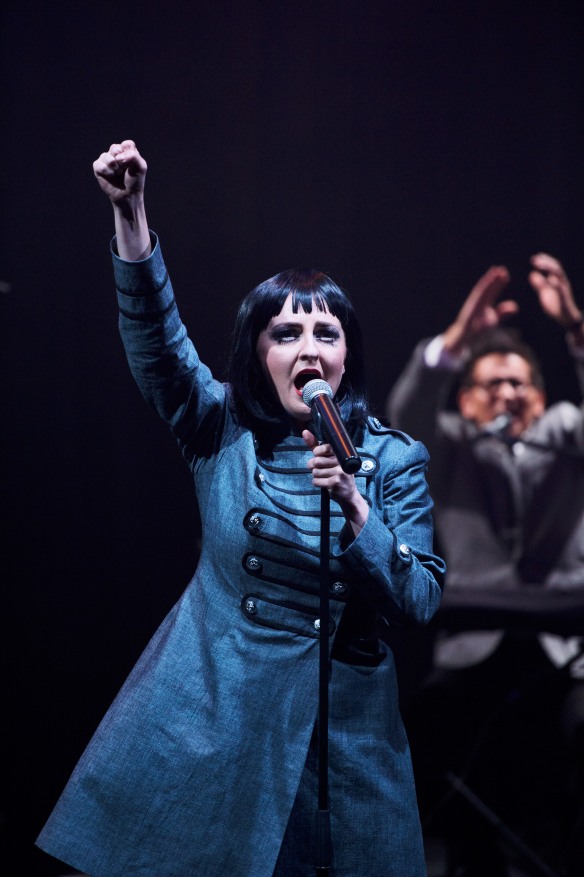 It is easy to appreciate why Brisbane loves Naomi Price. Like the fab four themselves, she is effortlessly cool and charismatic, and her voice has never been better, showing full technical and emotional range from a melodic, fantastical ‘Lucy in the Sky with Diamonds’ to the lyrical linger of the experimental ‘Eleanor Rigby’ and yearning plea of ‘Don’t Let Me Down’.

In its celebration of song nuance and detail, “Lady Beatle” also becomes so much more, in examination of the peace and harmony of the messages of numbers like ‘Come Together’, ‘Yellow Submarine’ (including an organic sing-along), a hauntingly honest ‘With a Little Help from my Friends’ and finally a hopeful ‘Here Comes the Sun’, which sees Price return to the stage in a rocking pants suit courtesy of costume designer Leigh Buchanan. Every aspect of the show is on-point in contribution to its overall message and appealing aesthetics. Jason Glenwright’s lighting design, for example, is everything it needs to be: bold, beautiful and perfect in accompaniment of the show’s changing musical moods.

“Lady Beatle” shows how, as a creatives, Adam Brunes and Naomi Price can do no wrong. Although unlike their earlier “Rumour Has It” and “Wrecking Ball”, this third and final show in their pop culture cabaret trilogy, isn’t a biopic, the modern memory play’s explosion of musical colours is just a rewarding. Given The Beatles’ recognition as the most commercially successful and critically acclaimed act in popular music history, audience members are sure to come with expectations, all of which will be exceeded in what will be an infectious rediscovery of the band’s iconic, diverse catalogue anew, channelled through a sole female voice. Indeed, its song curation and story craftedness combine to make “Lady Beatle” an example of cabaret at its very best, to make you laugh, cry and smile in hope for peace, equality and love.