The Hamlet Apocalypse (The Danger Ensemble) 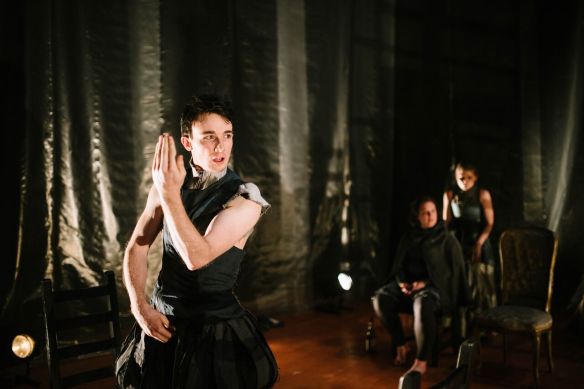 “Hamlet” represents one of the stage’s greatest challenges. The complex work’s sense of reality is shaped by powerful, poetic words and language with some of the most popular lines ever written, and there is the challenge of its duration as the longest of Shakespeare’s plays. The Danger Ensemble’s contemporary performance about an ensemble of actors (Chris Beckey, Caroline Dunphy, Nicole Harvey, Thomas Hutchins, Polly Sara, Peta Ward and Mitch Wood) staging the play on the eve of the apocalypse may be much shorter (though still with room for Rosencrantz, Guildenstern and a horse) than its source material, but is as complex as ever as the play unravels and more of the actors’ real-life personal revelations and fears begin to emerge; they have a version of “Hamlet” that they have rehearsed, but as a countdown gets closer to zero the show has to be abridged and personal issues sorted.

Presenting any derivative of “Hamlet” is always going to be a trial of strength. And “The Hamlet Apocalypse” certainly realises its intention of taking the play of ideas to a new and exciting place. Although it is probably best appreciated by those familiar enough with the original text to be able to follow the now-fragmented narrative, this can also work to its disadvantage as the loss of much of the play’s musical language and dramatic poetry is lamented. 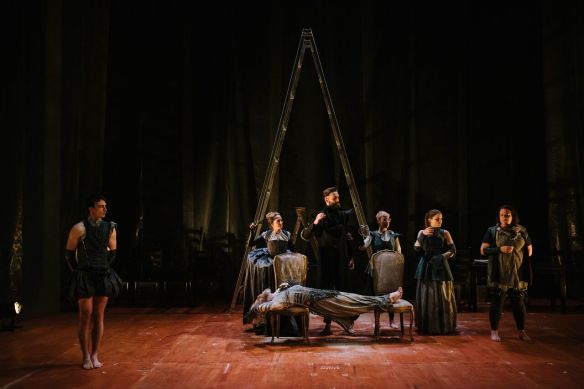 This is a “Hamlet” for the now generation, in which the line between fiction and reality blurs. It’s not an easy transition, however, the experimental work keeps a sense of tragedy in its performers’ breaks of the fourth wall. There is still touch on themes of the power of death and the value of life, but humour too, added to, rather than derived from within the text. Usually it works, such as in a hilarious group ‘imaginary eating’ scene. At other times, however, it is at the expense of key moments and emotional expression, such as when Hamlet’s Act Two share of his descent into worthless melancholy is overshadowed, visually and verbally by a background Claudius and Gertrude spitting wine over each other.

A show of such layering, theatricality and physicality, of course, needs a skilled cast and in this regard there are no weak links. Thomas Hutchins makes for a commanding new King Claudius, second husband to Hamlet’s mother Gertrude (Caroline Dunphy) in contrast to his constant line-reminder interjections to others as ‘himself’. As the titular Hamlet, Mitch Wood gives a fine performance that provides feel more of frustration than introspection. And Chris Beckey gives a nuanced performance that makes for a memorable visual presence, often absorbed as one with the aesthetic. 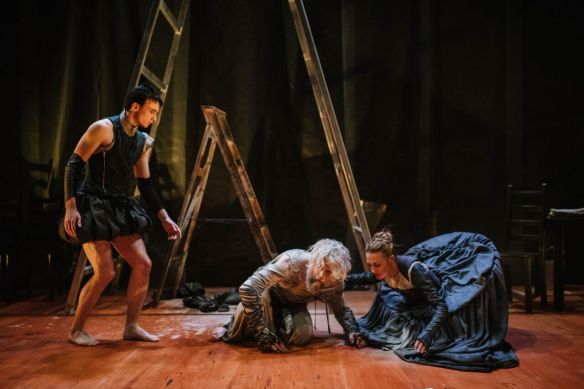 The show’s aesthetics are absorbing thanks to the sophisticated shading of Ben Hughes’ lighting design and Oscar Clark’s detailed, yet versatile costumes. Together, they make early scenes particularly stylistic in the slow-motion sensibility that acts in contrast to the big, hot mess of its conclusion (#inagoodway). Constantly we are reminded that we are watching a play. Indeed, never can the audience relax into the work, especially in the cresendoing chaos of concluding scenes as our attention is torn from ‘character’ to ‘character’ in simultaneous competition for our focus. And while the blinding visual flash and screeching soundscape countdown from ten to one that punctuates proceedings continues as novelty throughout, eliciting disruptive audience responses, this is probably the point.

“The Hamlet Apocalypse” may be ‘Hamlet but not as you know it’, but it represents all that is interesting about experimental theatre and the essence of Director Steven Mitchell Wright’s characteristic vision, last seen the company’s wicked “Macbeth”.  Its rich all-encompassing aesthetic makes for rewarding theatrical experience. And in celebration of The Danger Ensemble’s ten year anniversary, it is an excellent choice of show for a return season.