Brisbane’s own Circa Contemporary Circus is renowned for its multifaceted and diverse productions. Accordingly, the set-up for “Aura” is unique for a theatre experience; the show is presented along a runway stage area that straddles the space between two single lines of seated audience members, with headphones on in anticipation of the immersive work.

Appropriate for its presentation as part of Flowstate, a place where creative collisions are made and seen in a revitalised location in the heart of South Bank, the show serves as a love letter to Brisbane. Some thematic aspects stand clearer than others; in allusion to the river running parallel to the site, the show starts with a silver waterway down the centre of the stage, over which performers teeter in lean and use their bodies to bridge across its expanse before human frames are teemed together on a public transport trolley. In other moments the premise is subtler, but none-the-less entertaining in its curiosity, such as when a beep test with attitude routine transforms into more. And when, for example, a performer balances atop the handle of moving dolly, it is just wonderful to watch the reactions of the children in the audience across the stage, silent in awe and with mouths agape. 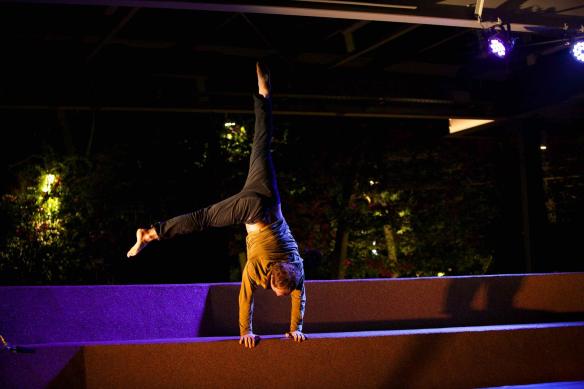 Limited space above the stage means that there are not too many high tower tricks, but still trademark rope work and shows of strength and steadiness, particularly in crescendo to conclusion in a routine reminiscent of the company’s epic “Il Ritorno” which premiered at Brisbane Powerhouse as part of 2015’s Brisbane Festival. And throughout the entire show, there is a seamless, sophisticated curation of numbers together to serve as ‘salute to the enchanted moment when the sun descends on the city’.

The meditative focus engendered by the Flowstate concept itself permeates the entire production, making it memorable for the manner with which a movement piece can project such a sense of stillness. And this is aptly supported by a tranquil soundscape in move towards its final ‘Heart of Glass’ finale, in contrast to the earlier symphony of city sounds that come courtesy of sound designer Daryl Wallis (working in collaboration with director Darcy Grant), shared in the stereo-headphones of individual audience members.

With so much to offer, the show is suitable for all ages. Especially when ensemble members are moving independently rather than en masse, it is difficult to determine at exactly which precision performance, one should look. Not only does this spoil the audience for choice of entertainment, but it means that every viewer has their own unique experience, which is at the core of Flowstate’s organic fare. And “Aura” offers not only the attraction of witnessing first-hand the talents of one of our best home grown exports, but the chance to be caught up in its moments of mindfulness, made even more special when bubbled against the Southbank surrounds and the light-show of the multidisciplinary Jem installation art alongside the new open air pavilion and creative space.