I’m not a huge Green Day fan. Even so, this did not stop my enjoyment of the band’s high octane rock opera, “American Idiot”. The energy is infectious from the moment the sung-through stage adaptation of the punk rock band’s seventh studio album screams to an explosive start with its powerful, catchy title track of angsty frustration shares the experience of a group of suburban youths unhappily living mind-numbing, aimless existences in the Alien Nation’s Jingletown USA.

The onstage band is brilliant in contribution to the show’s rock concert sensibility. Dialogue is limited and there is barely any break in the music. As someone unfamiliar with the majority of the lyrics, it would be been helpful to have been able to follow more than just the choruses of the rapid-fire numbers that suffered under their booming musical accompaniments. Still, the narrative can be followed easily enough with numbers like the mammoth anti-war power ballad ‘21 Guns’ providing some light and shade respite. 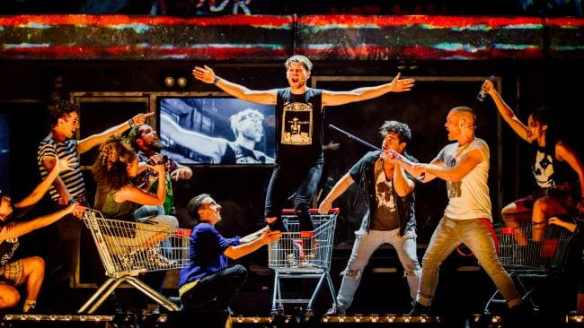 Like a rocking “Rent”, “American Idiot” has at its heart, a simple story of friendship. In this case, the story, expanded from that of the “American Idiot” concept album, is of three disillusioned and dissatisfied boyhood best mates, Johnny (Ben Bennett), Tunny (Connor Crawford) and Will (Alex Jeans) who are searching for meaning in a post 9/11, now Trump-era, America. Sick of life in the suburbs, self-proclaimed ‘Jesus of Suburbia’ Johnny flees with Tunny, while Will remains with his pregnant girlfriend. Tunny quickly gives up on life in the city, joins the military to be sent off to war, while the adolescent anti-hero Johnny turns to drugs and experiences lost love with Whatsername (Phoebe Panaretos in reprise of the role that earned her a Helpmann nomination last year).

As narratives go, it isn’t a particularly complex one. However, the show’s spectacle is not in its story so much as it’s hyper-real realisation. Craig Wilkinson’s video design is amongst the best even seen on the Brisbane stage, bringing the show’s songlist to life with projections of everything from graffiti to weather and elevating songs like ‘Holiday’ which shares Johnny’s city-experience high and its bleak and sombre hangover ‘Boulevard of Broken Dreams’, in which he wanders the city alone, to amongst the most memorable of the show’s earlier numbers. Choreography is dynamic, staging is simple and functional in its unclaustrophobic clutter and costumes represent the subculture with a grunge 101 checklist of leather, plaid, tank tops, band t-shirts, denim and chunky combat boots.

Numbers are not always high-energy; the beautifully melancholic ‘Wake Me Up When September Ends’ is a wonderful showcase of the male talent of stage. The knockout numbers, however, come from the ladies. As Johnny’s rebellious, destructive alter ego St Jimmy, triple Aria Award Winner Sarah McLeod of Australian rock band The Superjesus (who is playing the role in rotation with other Aussie rock legends Phil Jamieson of Grinspoon and Adalita of Magic Dirt) is a commanding presence every time she steps on stage. Not only does she look the rock-chic part with platinum blonde highlights, smoky eyeliner for days, a killer pair of boots and all sorts of attitude, but her powerhouse vocals in ‘St Jimmy’, during which Johnny injects heroin for the first time, are flawless. And as a frightened and fed-up Whatsername, Phoebe Panaretos is blistering in ‘Letterbomb’ during which she shatters Johnny’s illusions in attempt to bring him to maturity.

Despite its tight 90-minute duration, the show is filled with musical highlights such as its final number ‘‘Whatsername’ which literally reverberates through the audience as one year later, Johnny laments that he lost the love of his life, but looks towards a hopeful future of acceptance. Although we all probably wanted to hear ‘(Good Riddance) Time of Your Life’, even as encore, the inclusion of the high-school graduation staple seems to be awkward one at odds with the feel of the show’s infectious energy.

Without intermission, “American Idiot” hurdles forth at an in-your-face unrelenting pace. It is not a jukebox musical but a pop-punk rock opera. Not only does it demand your attention musically, but it takes you along a ride of rebelliousness, resolve and reflection. Indeed, its versatile Green Day soundtrack offers much to contemplate through its a damning message about American values and mass media orchestrated public paranoia, brought to epic life in this highly-polished, politically-charged production. But as a musical for a younger generation, it abounds with foul language and also drugs-and-sex-references so is not for the easily offended.