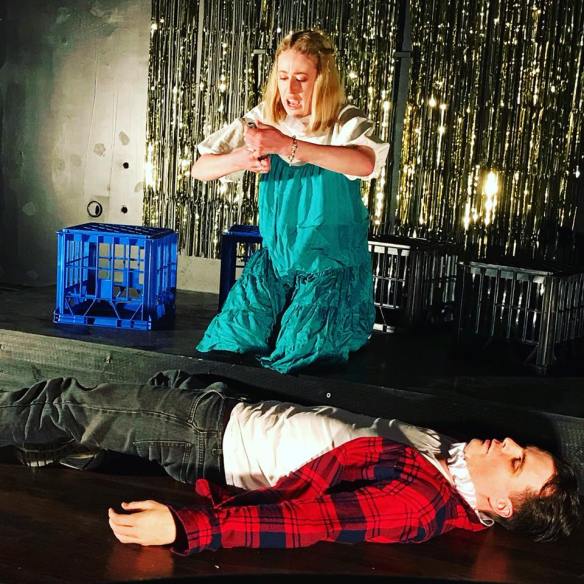 Everyone knows the story of star-crossed lovers Romeo and Juliet. The tragic tale of their untimely deaths reconciling the two households of their feuding fair-Verona families is one of Shakespeare’s most frequently performed plays. Its woe has been reworked countless times, on this occasion in Wickham Street’s Daily Planet Cafe courtesy of Pastiche Theatre Collective. Rather than reimagining the classic as so many of its reworks do, “Romeo & Juliet & Friends” gets straight to the core of its acclaim, condensing the two hours’ traffic, balancing its poetic language with contemporary vernacular and adding a musical soundtrack. There are also pauses throughout to make mention of earlier source material of Arthur Brooke et al, in show of how Shakespeare’s work is itself an adaptation. There is even metatheatre consideration of the question of adaptation which turns into an inset affirmative vs negative school debate.

Modern twists appear from the outset of the boisterous take through reappropriation of the prologue as a rap and later as the Nurse banters in text message with her mistress’ bae. Simple additions also establish characters beyond just the white frill collars of each of the four performers. Props serve their purpose too; milk crates are stacked to represent loving Juliet’s iconic balcony and foam swords become makeshift guitars one moment and in the next, Act Three fiddlesticks in the swordfight that sees the witty Mercutio stabbed. The venue itself is of good size for an intimate show of this sort with enough space for not only a decent stage area, but for actors to head into and around the audience to unfold some scenes.

The abridgment obviously means that many scenes are lost. The fairies midwife Queen Mab, for example, barely gets a mention, but the work does not suffer because of it. Wise content choices keep the integrity of the original text while adding interest and momentum. Having the scene of the Friar telling Romeo to flee to Mantua play out physically alongside the Nurse reporting to a heartbroken Juliet about his banishment, works wonderfully, for example.

Appropriately, “Romeo & Juliet & Friends” starts out as a lively comedy before taking a sharp turn into drama. The performers assume multiple roles with ease and there is no confusion around their switches thanks to simple costumes and characterisation. And they are very funny, especially in gender blind casting which sees Daniel Simpson have a great time with his lines as Juliet’s chatty and excitable Nurse and Georgia Nielsen relishing in the comedy of the overly-invested Friar Laurence. Sam Valentine transitions easily a raging Lord Capulet determined to have his daughter married to a charming, lovestruck Romeo, and is excellent in both guises. Similarly, Samantha Sherrin is both the bold, quick-tempered ‘Prince of Cats’ Tybalt and a headstrong Juliet. Both Valentine and Sherrin are at their best in their protagonist roles after Romeo is banished; Sherrin excels, for example, in her emotional monologues.

Like its melodramatic source material, “Romeo & Juliet & Friends” has a lot going on and, as such, a lot to offer. While answer as to the ‘to adapt or not to adapt’ question is answered by the work itself, there is enough of both perspectives within it to keep proponents of either side of argument satisfied. As this accessible examination of the cannon classic shows, clearly, there’s life in the old play yet.