The adverb en masse means all together. It is therefore, not only an artsty, but an appropriate title for the latest work of world renowned Brisbane-based contemporary circus company Circa. The new work, in world premiere at the Brisbane Festival features not only Artistic Director Yaron Lifschitz’s trademark masse of humans intertwined throughout part of the piece, but a collective of artforms curated together to become its advertised wild, tender and savage ride. The contradictory aspects come courtesy of its ambitious presentation of two visions of humanity at its extremes through circus settings of Schubert’s “Winter’s Journey” and selections from his collection “Swan Song”, as well as Stravinsky’s “Rite of Spring”. And the contrast between the works is clearly evident, making “En Masse” a show that is well a truly one of two halves.

Act One sees Schubert’s exquisitely dark songs of loss and love shared by leading English tenor Rob Murray as acrobats from Circa’s legendary ensemble bend between anarchic energy and exquisite loss. There is a sense of disconnection as performers lie strewn across the front of the stage, contorting as they are drawn back behind the barely-raised scrim. When it is lifted, the atmosphere is still bleak as we see initially 10 and then just one performer in a translucent plastic cube, trying to the shape and control its claustrophobic containment of him, before realisation of the futility of resistance.

The grim, apocalyptic feel is evident in every aspect of the stylishly minimal design aesthetic, including Murray’s dishevelled appearance as a vagrant watching the action. But it is also all about contrasts as violently aggressive, almost epileptic, angular movements follow frenetically from the fluidity of lyric and tender moments and the operatic calm. And the ebb and flow of the solo, duo, trio and group pieces continues in accent of the music, allowing it to shape key moments but also play more of a support role where necessary. 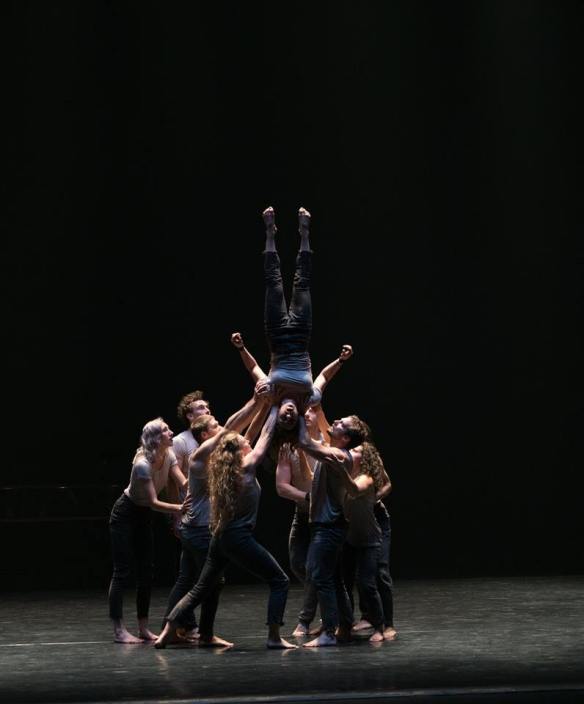 Things brighten in Act Two which sees the stage erupt with the energy of Stravinsky’s controversial ballet “Rite of Spring”, which is played live in a piano duet by acclaimed pianists Tamara-Anna Cislowska and Michael Kieran Harvey while acrobats are pitted in a life-and-death struggle between group and victim. The first-ever circus setting of the orchestral work makes an impact from its opening moments, as the focus is moved from the intimate to the more expansive as the illusion of the cube containment is amplified to encasement of the large Playhouse stage. Within it, performers still pyramid atop each other, jump into and over each other and are dragged about, but there is a definitely sense of divergence as they explore the familiar, but still astounding work’s depiction of a wild pagan spring ritual, rising and falling impressively in canon and dominoing in unison.

As with any Circa show, it is easy to appreciate the company’s high regard. Not only are all members of the group of 10 hugely talented acrobats remarkably skilful in every aspect of their delivery of the physically demanding show, but their intense and sustained focus throughout is astounding, and also intriguing. And it is impressive to see the interchangeable strength of male and female performers in catching and carrying each other around.

Clearly Brisbane audiences love joining to rejoice in the successes of our own ‘little circus company that could’ and its domination of the artform; I do not think I have ever seen the Playhouse foyer so abuzz with busyness before a show and forget trying to get hands upon a highly-sought-after program. It seems the audience know that even if you have seen Circa before and so you think you might know what to anticipate, their shows will not only be gripping but also still amaze with something new and exciting. In this instance it may be when a performer walks across the front of the stage with bent-over feet to become their own pointe shoe, or when a tower of three men topple forward into a roll, or maybe when a woman does a one-handed handstand while balanced on top of a two-man tower. (Given the number of audible reactions from the audience during the show, the list could definitely go on.) 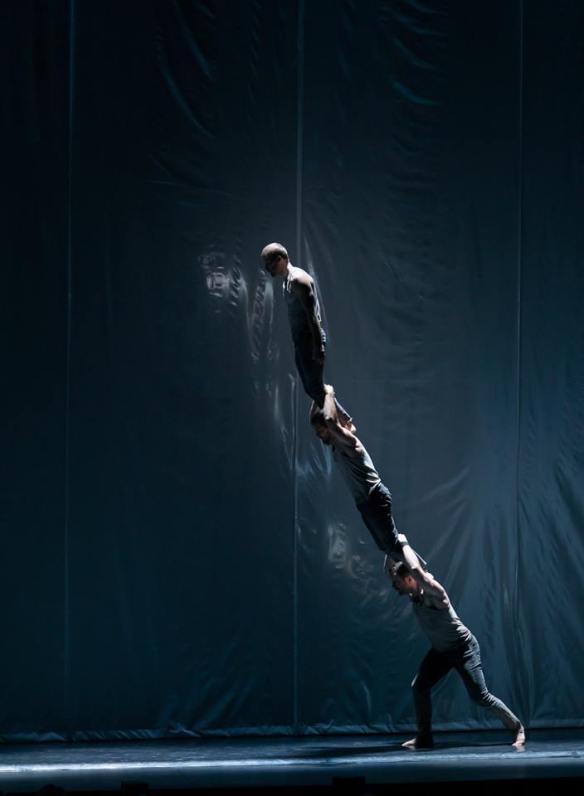 This is what Circa does and it is what they with excellence. While giving physical language to these classical scores is an interesting exploration, the performance’s theatrical aspects and addition of a narrative of sorts both adds to and, at times, detracts for this core business, but this see-saw reaction is probably appropriate given the contrasts so integral to the essence of the work. Even to those unfamiliar with the Schubert and Stravinsky and especially to those unacquainted with Circa, this is a show or rich reward that, like so many others, we are lucky to have as part of this year’s festival.