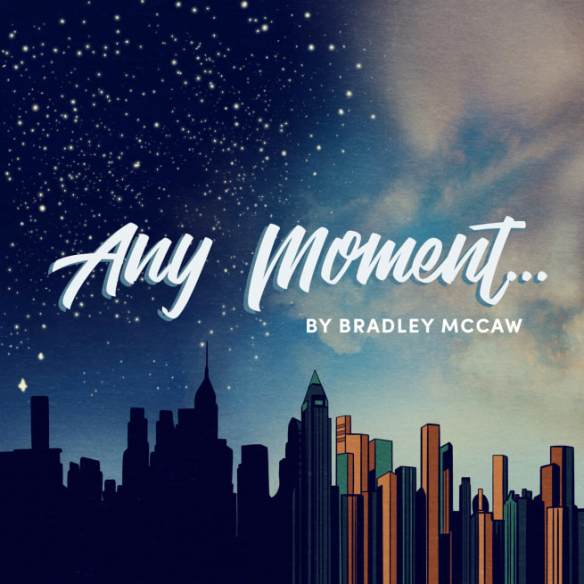 “Any Moment a new musical by Bradley McCaw” The Concept Recording, is a new work from award winning writer/performer and emerging composer Bradley McCaw. Set over the course of 24 hours, the work begins at midnight on New Year’s Eve, and moves throughout a single town, hearing stories from various individuals as the clock tumbles toward a New Year. Its inspiration from the famous John Lennon quote, ‘Life is what happens while you’re busy making other plans’ is clear in this narrative premise and through-line exploration of what a minute in time truly represents.

It starts as we meet four strangers; a young man running away from home, a woman at a party, a truck driver heading home to his family and a new mother with her crying child in the cresendoing ‘Twenty More Till​’, which tantalises with suggestion of the spectacle that sets great opening musical numbers apart from the humdrumness of others.

The recording is inspired by hit musicals like “Songs for A New World,” and “Closer Than Ever,” and the musical influence is seen across the familiar feel of its 11-song soundtrack. There is humour too, in, for example, ‘My Phone’, in which two strangers (Judy Hainsworth & Shaun Kohlman) sing about their most prominent personal relationship and Emily Kristopher’s cute rendition of the bright and breezy ‘Rovers Song’, in which she sings as a young girl explaining her parents impending divorce, to her dog.

It is the ‘big’ numbers, however, that are the most memorable especially in their feature of performances by some of the finest performers from our musical theatre stages. Kurt Phelan implores his character to move on, as his ex gets married at the Church across town in ‘A Church on Murphy Street’, a tender, emotional highlight, that is both sentimental and soaring. And Lizzie Moore is exhilarating in sassy Sutton Foster-esque vocal presence in the final song, ‘Hard to Keep a Good Girl Down’, in which a woman unpacks the ending of her marriage.

Across its track listing, “Any Moment a new musical by Bradley McCaw” The Concept Recording features much variety and many musical highlights dependent upon personal preferences. While the recording aims to not showcase a Complete Final Musical Theatre work, it provides us with enough hint as to what “Any Moment” could be, to only want more. Lucky Melbournians will get the exclusive first look at the new work in celebration of its release at Chapel off Chapel this June as part of the Melbourne Cabaret Festival.