The House of Mirrors and Hearts (Kleva Hive)

Appropriately, the Australian premiere season of the chamber musical “The House of Mirrors and Hearts” features a set of mirrors centre stage. Also immediately clear is the heart of the narrative, mother Anna (Fiona Buchanan), who is clearly the vibrant centre of the family whose story the show explores… that is until tragedy strikes. Fast forward seven years and the mirrors no longer gleam she tells us in the ‘The Passing of Seven Years’; the family is now operating on the bitter brink of destruction, driven by secrets and lies. The arrival of a lodger, Nathan (Christoher Batkin) forces confrontation of the emotions that Anna and her daughters Laura (Bonnie Fawcett) and Lily (Abigail Peace) have been suppressing since the accident that changed their lives. 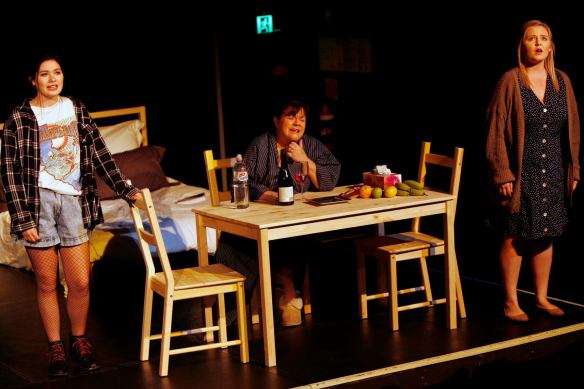 Traumatised by what has happened in their history the three women are living a dysfunctional disaster of their own design, spiralling towards self-destruction. It is all quite sad really and it is a credit that the production doesn’t ever judge its characters, even if we do. Alcoholic Anna is now far from the caring mother established pre-incident, relying on ‘Something for the Pain’ to keep her sane. It’s a meaty role that Buchanan sinks her teeth into, however, the show’s standout performances come courtesy of her daughters, Fawcett as the quiet and introspective Laura and especially Peace as the brazen Lily, looking to dull her pain with meaningless sexual encounters and alcohol.

There is a lot of drama to “The House of Mirrors and Hearts” and the on-point expression and movement of all cast members, not only conveys much feeling, but allows us to be taken, if only for short interludes, out its small stage space. Indeed, the cast of seasoned local performers, is excellent. The confines of the intimate Lumen Room space, does do a disservice to the show’s material though. While having a stage packed with props does work towards conveyance of the confusion that is at core of the family’s now-existence, having characters emerging and retreating to the side of stalls area, is somewhat of a distraction, especially early on when the passage of time is signposted by change of actors from Tyallah Bullock as Young Laura and Isabel Davies as Young Lily, to their contemporary selves.

The musical, which first opened to critical acclaim off West End in 2015, has a real “Blood Brothers” type of feel to its sensibility, infused with some humour. It is a challenge however, to go from solemnity to comedy and take audience members along with you and musically, the cumbersome rhyme of ‘Something for the Pain’ is not enough to make such a seamless transition. Perhaps it is because of the space restrictions, that the bawdy possibilities of this early Act One number are not fully exploited. Still, it is a memorable experience all the same.

Despite its dark themes, the live music, which comes courtesy of Pianist Kather Gavranich, Flautist Greta Hunter and Cellist Anna Brookfield, squashed together at back of stage, is beautiful and very different from your standard musical fare. But the score comes without any real standouts apart from ‘Something for the Pain’ which serves as a lonely reprieve from an otherwise apparently repetitive and bleak score. There are vocal highlights, including Fawcett’s Act Two soaring reflection on the beauty of breaking of things and when the ensemble harmonises in the song’s progress, however, varying vocal levels in both dialogue and songs sees some Act One lines lost even to those audience members in the initial rows. 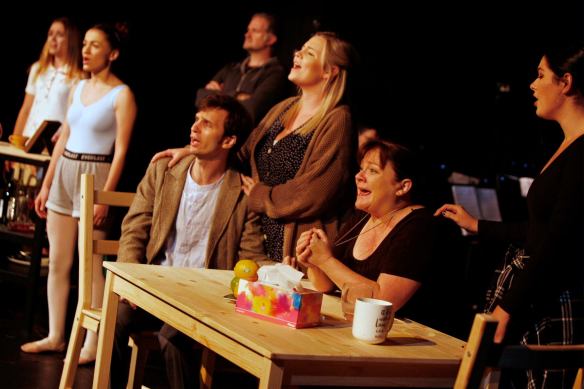 The biggest concern of the mixed-bag of a show, however, comes through no fault of this production. The plot is quite confusing with twist and turns not entirely straightened out. “There are truths told in the shadows” we are told in reappropriated reprise of Chris Kellet’s ‘Little Bird’ song. Indeed, the secrets of which the characters sing hang over every conversation meaning that the intrigue that veils over Act One takes too long to move from tension to problematic attempt at an unrealistic resolution.

Regardless of any issues in the show’s writing, “The House of Mirrors and Hearts” represents a wonderful undertaking. Kleva Hive’ musical theatre incubator program has provided a welcomed opportunity to bring a new musical work to Brisbane and we can only await their August show, “Salt”, a localised adaptation of Henrik Ibsen’s play “The Lady from The Sea”, complete with original Australian compositions.