Puttin’ on the Ritz (Mellen Events)

An “all-singing, all-dancing celebration of some of the most iconic music of all time” is how the UK’s “Puttin’ on the Ritz” is marketed. And from its ‘That’s Entertainment’ opener, its razzamatazz realisation of this is clear. Indeed, the extravagant celebration of some of the most famous songs from the Golden Age of Hollywood has an infectious energy throughout its two hours (including interval).

Act One unfolds as a tribute to composers and musical geniuses George Gerswin, Irving Berlin and Cole Porter, with Porter numbers standing as late act highlights in their take back to previous QPAC shows “Kiss Me Kate” through a boisterous ‘Another op’nin’, another Show’ and “Anything Goes” and its titular tap number. Though not presented as a nifty nautical number, the tap-dance is not only full of fun in its vintage vibe but impressively spot-on its in-unison ensemble tap timing, making further back in the theatre seats an ideal location from which to be amazed by the collaborative spectacle.

While its focus is on the three composers, there is a mix of styles in the presentation of numbers, that never detract from the integrity of the original pieces. An all-female ‘Easter Parade’ takes its melody to a joyously upbeat place, while ‘Swanee’ reveals in the original number’s Dixie-ness.

The focus digresses in Act Two though, which features a wonderful Judy Garland tribute, including authentic costumes and choreography in accompaniment of ‘Get Happy’ and ‘A Couple of Swells’ before just as impressive snippets of a delightful ‘The Trolley Song’ and an enchantingly beautiful ‘Over the Rainbow’. Act Two is indeed eclectic, as we are taken to New York’s Cotton Club for some ‘Minnie the Moocher’ type jazz numbers and also treated to an impressive intertwined ensemble hand-clap and slap number of increasing speed, with dancers sitting on the edge of the stage using isolated parts of their bodies in unison choreography. It is the spectacle of numbers like this from the 16-strong stellar cast of six multi-talented vocalists and 10 energetic dancers that contribute to the overall experience, making numbers like ‘There’s No Business like Show Business’ and ‘It Don’t Mean a Thing’ vibrant standouts. An array of detailed dancer costumes also contributes to the aesthetic, although Act One appears to be dominated by a predominantly pink saccharine style of lighting. 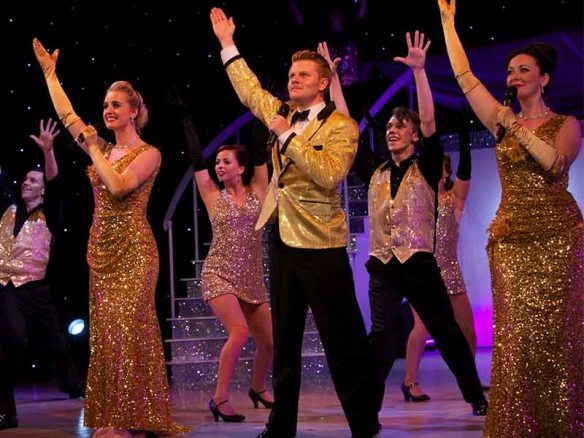 “Puttin’ on the Ritz” represents a nostalgic journey into the guilty pleasure memories of Saturday afternoon movie musicals or even cartoon spoofs. While it drops some interesting facts about song composers, this is a show about its music, meaning that its lack of live orchestration is a noticeable lost opportunity. Still, the show is iconic easy listening at its most entertaining, obviously appreciated by audience members at its return Australian tour direct from London’s West End.