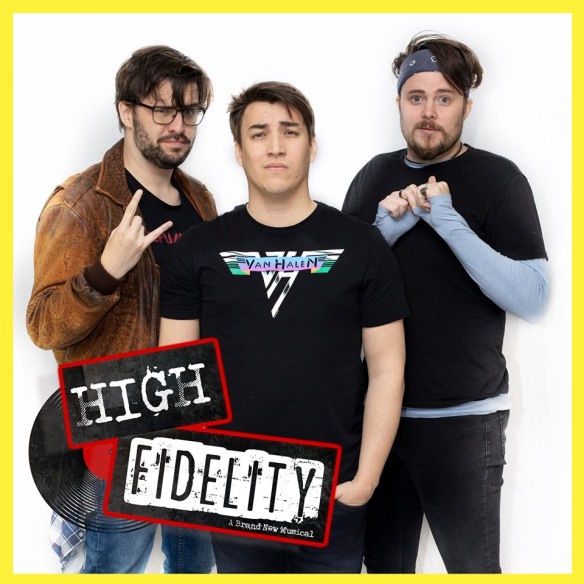 Music-loving record shop owner Rob (William Boyd) is a self-centred, self-confessed everyman in his thirties going through a painful re-evaluation of his life and lost loves, with a little help from his music, in the hope of finding real happiness. By day, Rob holds court at his record store, which is where “High Fidelity” opens with one of its highlight numbers, the catchy ‘Last Real Record Store on Earth’. By this, we are also introduced to ‘musical moron twins’, his co-workers Barry (Lachlan Clark) and Dick (Isaac Tibbs) and learn of Rob’s breakup with lawyer Laura (Katya Bryant) who is now in relationship with new-age interventionist Ian (Bradley Chapan).

Their stories are ones that many know well; “High Fidelity” is based on British author Nick Hornby’s instant-hit 1995 novel and the 2000 film adaptation, which starred John Cusack and became a cult classic. As in their earlier incantations, armed with their collective encyclopaedic knowledge of all things musical, the trio of characters compile top five lists for every occasion, so of course Rob’s breakup prompts him to song with ‘Desert Island Top 5 Breakups’, as said women from his history sass about the stage. Things slow after the ballad ‘Ready to Settle’ when we find out the details behind Rob’s breakup, but Act Two momentums along in journey through a range of musical styles (This is a musical whose score is original but pays tribute to existing bands or songs, with influences for each listed in its program).

Act Two is full of musical highlights. ‘Conflict Resolution’ represents a wonderful parody number, on repeat, as Rob reflects upon alternative ways that he could have reacted during an uncomfortable conversation with Ian. Its Guns ‘N’ Roses, Beastie Boys and Snoop Dog segments are each as entertaining as each other in their distinction and give Aaron Hamilton a change to shine on drums. Parody also appears in a fantasy sequence, ‘Goodbye and GoodLluck’, during which Bruce Springsteen materialises to advise Rob how to be like The Boss. The number not only has the icon’s energy and distinctive rousing rock sounds, bit it even features appearance of The Big Man Clarence Clemons and a ‘Dancing in the Dark’ style Courtney Cox pull up onto stage to dance along.

Across the show, the small band does a stellar job with musicians often playing multiple instruments. Act Two’s opener ‘I Slept with Someone/Lyle Lovett’ offers opportunity for Tess McLennan to provide a softer, violin touch to the soundtrack, however, the lyrics of songs like ‘She Goes’, in which mutual friend Liz delivers some harsh home truths to Rob about his macho act, become difficult to decipher under the band’s boom. On-stage there is a clear energy to the songs and pleasing harmonies in the big choral numbers that see the company come together.

The trio of diverse record shop workers are brilliantly played, drawing upon but not allowing their performances to be defined by their famous film archetypes. Clark’s brash Barry is somewhat unlikable but undeniably funny in his angry, arrogant mania. Tibbs makes the painfully shy Dick a standout character, capturing his awkward insecurity in his every heightened reaction, especially in attempt to talk with women. Boyd is a relatable, flawed Rob and his conversational monologues to the audience from centre stage go some way towards capturing the story’s integral introspection, however, ultimately the production suffers somewhat due its departures from the story’s emotion for the sake of comedy.

While the story’s central pop culture threads are still evident, its honest observations about human relationship aren’t as readily apparent. Although Rob says he has changed from one who speaks with passion about the power of a well-curated mixtape to remedy all, we don’t really see his new-found emotional intelligence emerging, perhaps because of all the distractions on stage. Some moments are very funny, however, the laughs come mostly through throw-away lines not central to their scenes. And although little background details (beyond just seeing the “Beaches” soundtrack in the Hip Hop section) add amusement, there is a fine line between these being incidental additions and distractions from the main action.

It’s little details that prove to be the show’s undoing. While it attempts to pay homage to the music of geek culture, appearance of a Little Dum Dum Club tshirt in the ensemble, brings era authenticity into question. And although scene transitions are swift, choreography is a little rough around the edges and doesn’t always exploit the possibilities of the space.

As a musical “High Fidelity” will not be to everyone’s tastes as it includes course language and partial nudity. In some ways it is easy to understand how the Broadway production of the show closed after 18 previews and 13 regular performances, given its lyrics’ unimaginative rhymes of the ‘I’d be making fun of them …. I’m really one of them’ and ‘Now you finally got a winner. Did you even cook her dinner’ sort. And while though the iconic line ‘which came first the, music or misery’ makes appearance it seems that Rob’s unhappiness and this fidelity to its source material have been sacrificed for the sake of comedy, meaning that the narrative wears a little thin. It is not without its charm though and music still stands strong as a central theme, resulting in at least numerous opportunities for nostalgic indulgence courtesy of the record covers on display.