The Wizard of Oz (Harvest Rain)

It seems that there is no place like home for Harvest Rain with the company’s return to Brisbane with this year’s arena spectacular show, “The Wizard of Oz”, the most ambitious yet in terms of its scale with an amateur mass ensemble of over 500 performers joining a professional principal cast at the Brisbane Entertainment centre. The result is a bright production full of colour and moment for all ages to enjoy. 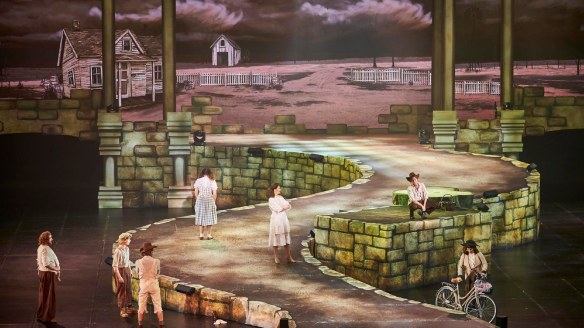 Before the wildly imaginative “The Wizard of Oz” morphs into the technicolour tale we all know from its iconic 1939 musical fantasy movie treatment, it starts with a sepia washed scene, detailed down to even Dorothy’s ‘blue’ gingham dress, as things open in Kansas where farm folk, Uncle Henry (Matty Johnson) and a particularly youthful Aunt Em (Aurelie Roque) attempt to convince young Dorothy (Carly Bettinson) of the need to hand over her dog Toto after he bites nasty neighbour Miss Gulch (Bil Heit)…. until a tornado strikes in impede of Dorothy’s attempt to run away. It is an opening scene full of foreshadowing through introduction of three farm workers, Hunk (Chris Geoghegan), Hickory (Michael Nunn) and Zeke (Josh Whitten), the Scarecrow, Tin Man and Cowardly Lion’s alter egos, and the wonderful Professor Marvel (John Wood). Before the tornado sends the farmhouse spinning, however, we are treated to the show’s signature ballad, ‘Somewhere Over the Rainbow’, in which Dorothy sings of the need to find a place where there isn’t any trouble, after failing to get the others to listen to her story.

Along with an exploding soundscape and Craig Wilkinson’s wall-to-wall video realisation and animations courtesy of a 9-metre high LED screen backdrops to the set, we are taking through experience of the twister. Then we are awashed with vivid colour, making it clear that we are not in Kansas anymore but rather over the rainbow in the Land of Oz, where Dorothy’s house has landed not just in Munchkinland but on top of the Wicked Witch of the East. While Dorothy is initially greeted by Good Witch of the East Glinda (Aurelie Roque) and troll-haired ensemble munchkins sneaking out from all sorts of nooks and crannies to gleefully sing in celebration of the Wicked Witch’s ‘Ding Don’ demise, her sister, the Wicked Witch of the West (Bil Heit) is seeking revenge, not so much for Dorothy ‘turning her sister into a house’, as her ‘take’ of her sister’s ruby red slippers. And so, on Glinda’s direction, Dorothy sets out to follow the yellow brick road to the Emerald City where she can ask the Wizard of Oz (John Wood) to help her get back home. During her journey, she meets a Scarecrow (Chris Geoghegan) in need of a brain, Tinman (Michael Nunn) who desires to have a heart and a Cowardly Lion (Josh Whitten) in need of courage, who accompany her to Emerald City so they can also ask the Wizard for help.

With effervescent songs such as ‘Follow the Yellow Bring Road’, ‘We’re Off to See the Wizard’ and ‘Merry Old Land of Oz’, there are plenty of opportunities for big choreographic numbers often filling the three basketball court sized space. Indeed, the big ensemble numbers serve as justification of the show’s spectacular descriptor, however, more so than previous arena spectaculars staged at the Brisbane Convention Centre, this also means that other numbers play in a comparatively empty space, which only distances the audience from any emotional engagement.

Under Dennett Hudson’s musical direction, the music sounds sharp, especially when showcased in initial Overture and Entracte as we resume the story in the Emerald City where things aren’t actually so wonderful, given the Rafferty’s rules behind the smoke and mirrors of the Wizard’s situation. While Act Two takes the audience to some darker places with liquidation of the Wicked Witch, it also features the standout ‘The Jitterbug’ musical number, cut from the MGM movie. The spirited number makes for a wonderful experience thanks to the older ensemble dancers’ on-point, in unison execution of Callum Mansfield’s lively choreography.

Like its backstory show “Wicked”, the “The Wizard of Oz” is sprinkled with malpropisms for humorous effect, though also, on opening night, some less deliberate dialogue lapses. And a smattering of intertextual additions allow additional opportunities for humour. The witches do a good job in their respective roles, even if these are a little jarring in their stray away from cannon. Glinda is more sassy than saccharine and the Wicked Witch is a cackling caricature, not particularly concerned with her sister’s demise. When serious technical issues see the opening night performance stopped, however, their ad-libs in eventual resumption of the show help everyone to move on.

Bettinson does a decent job as the show’s adolescent protagonist, however, it is her companions that steal the most audience attention, Whitten as the nerveless lion, Nunn as the heartless Tin Man and particularly Geoghegan as her first friend, the lively but mindless Scarecrow. In particular, Geoghegan stands out thanks to his physicality, convincingly flopping about the place as if really made of hay and his duet with Bettinson, ‘If I Only Had a Brain’ is a memorable, energetic explanation about what each wants from the Wizard. Ultimately, however, there is a clear camaraderie conveyed as the four venture together into the forest of lions and tigers and bears.

Harvest Rain’s “The Wizard of Oz” offers audiences a change to spend some time with a favourite story. It captures the nostalgic sweetness of the original tale but balances it with an integral energy and dynamic design aesthetic that gives each scene a distinct, detailed palette. And its ensemble encore of ‘Over the Rainbow’ serves as an ideal reminder of its excellent score, making it a charming way to end school holidays.