The Curator’s homage to great Norwegian playwright Henrick Ibsen’s controversial “Ghosts” is innovative from even the initial moments of its experience. Smoke haze meets the audience upon entrance into the Vintage Pop-Up Theatre in Red Hill’s St Barnabas Hall. In opening, characters emerge to move forward towards us from behind a makeshift plastic scrim screen. A menacing soundtrack signals the carpenter Engstrand’s (Warwick Comber) pressure of his daughter, Regina (Lauren Roche) to become a prostitute. Their resulting course language in brash interaction appears to be as jarring within the 1881 play, however, ultimately it does detract anything from the work as a whole, which is excellent in every regard.

Regina is maid to the widowed Helene Alving (Lisa Hickey) who is horrified to overhear Regina flirting with her beloved bohemian artist son Oswald (Patrick Shearer) who has recently returned from years of exile in Paris, where his mother sent him to avoid him being corrupted by his father. The layered story from there is of Helene who is in the final stages of opening an orphanage with her charitable partner, and the story’s moral compass, Pastor Manders (Tom Coyle) in memory of her husband Captain Alving. Regretful of staying with the debauched Captain out of social obligation, she thinks that opening the facility in his name will put to rest rumours, but also guarantee that none of his money will go to their son, whom Helene wants to inherit from her alone. It is a slow build to almost Oedipus territory as Helene determines to liberate her son from the ghosts of their past until things take a sudden turn in a tumultuous Act Two as the extent of Oswald’s suffering from the syphilis he ‘inherited’ from his father is fully revealed. 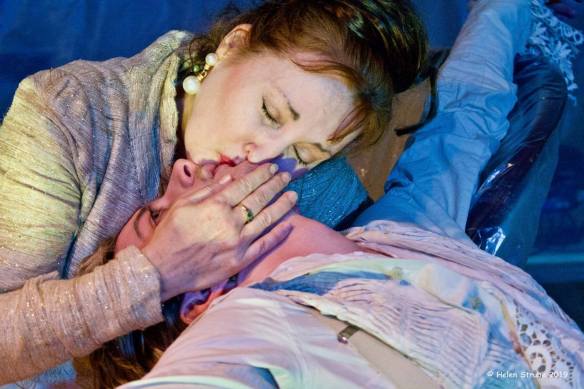 The tragic story of Helene and her son Osworld is a mythic one, especially as the two descend into the darkness of Act Two. As great works so often are, the play is full of contemplative themes and quotable dialogue about each of us being the ghosts of our past, and in The Curator’s hands this realisation stands strong as not just a tribute to Ibsen but to being human, through its highlight of the themes of duty, reputation and deception. The playwright’s advocacy and sympathy for women through inclusion of strong female characters is not diminished either.

The heavy material of “Ghosts” demands much from its actors and all members of the cast deliver in this regard. Act Two is swift but packs a big punch as hinted-at devastating revelations are unravelled, making the agonising ending quite affecting thanks in particular to Shearer’s powerful and precise performance in the show’s climatic scene. He is an expressive performer down to every possible nuance, especially when in wide-eyed defence of his hyperbolical La Boheme lifestyle. Indeed, his textured performance as the petulant painter is as polished as any I have seen in professional productions of Isben’s works. Also of particular note is Hickey who displays a commanding stage presence as the desperate secret-keeper Helene, possessed in the defence of her own child.

Dynamic make-up and detailed costumes serve as similar stand-out aspects of the polished production; the authentically-ostentatious but constrictive costuming is immediately noteworthy. And Bethany Scott’s lighting design serves as a frame for each of the show’s acts. Director Michael Beh’s set design is such that we see the play rip through the plastic wrapping of society not just metaphorically but literally, thanks to the initial plastic-wrap of furniture items which are repositioned in ‘reboot’ during blackout scene changes which provkes further interest.

Like many of Ibsen’s plays, “Ghosts” is a scathing commentary on 19th-century morality. Because of its subject matter, which includes religion, venereal disease, incest and euthanasia, it is an ambitious theatrical undertaking, especially from an independent theatre company, which makes The Curator’s production particularly outstanding. The show is not only exciting, but difficult to fault. The company brings the classic to life in a creative way, but does so in a manner that fosters refreshed audience interest in its playwright. While it may not be a mainstream manifestation of a work of realism and, therefore, is perhaps an acquired taste, its design elements are impressive and its performances are captivating, meaning that we can only await with anticipation what the company tackles for its next production.