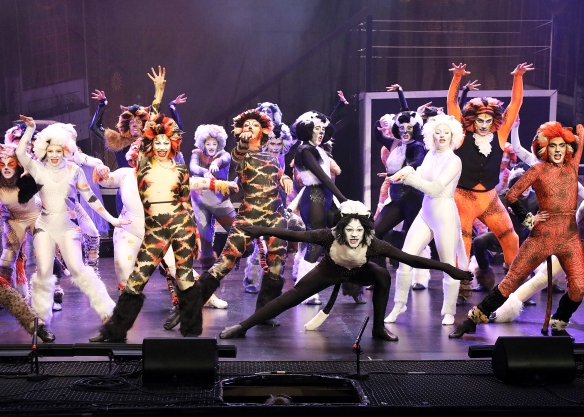 Andrew Lloyd Webber’s “Cats” is a show that polarises musical theatre fans; people either love it or hate it, but are rarely ambivalent, which alone makes it an ambitious choice for any production company, aside from it being so heavily grounded in dance. On the heels of their accomplished “Annie”, Queensland Musical Theatre are, however, more than up for the task, given its expandable cast of different age groups.

Based on the poetry of T. S. Eliot, the anthology-style, fully sung-through musical takes place over the course of one night, telling the story in song and dance, of the annual junkyard gathering of Jellicle cats, during which one special cat is selected to ascent to the Heaviside layer. Most people probably know the musical, however, because of its operatta-ish ‘Memory’, one of the only songs that doesn’t come from a T.S. Eliot poem and one of Andrew Lloyd Webber’s most famous compositions, which represents the story’s climax as the character Grizabella, engages in a melancholic remembrance of her glamorous past as a plea for acceptance. And, appropriately, the numbers stands as one of this production’s standout moments as Alison McKenzie’s deeply rich and mellow take, moves the audience to goosebumps in its power and impressive key-change sounds during the number’s Act Two reprise. 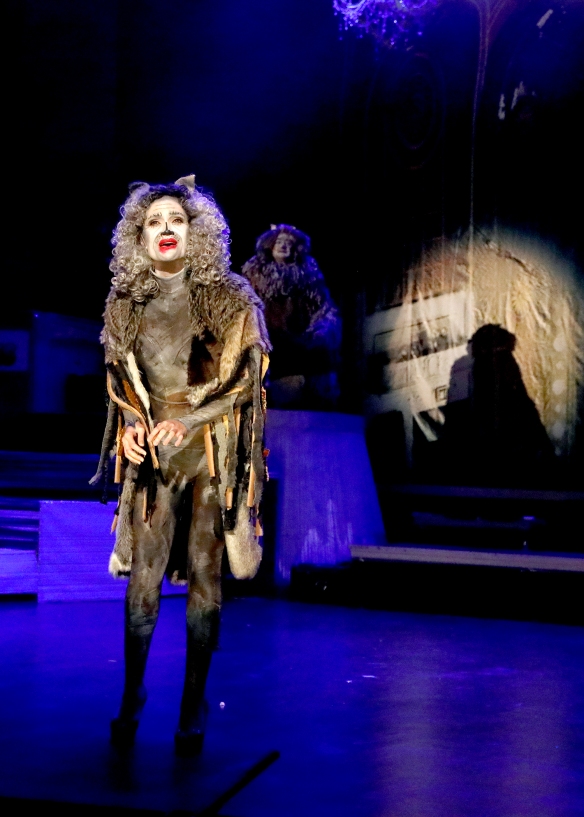 The show’s music is a significant part of its success. From the overture, the band, under Conductor Julie Whiting, is excellent in its execution of the eclectic score, even if, on opening night, things were a little loud at times, making it difficult to understand performer lyrics in the softer moments. Still, ‘Jellicle Songs for Jellicle Cats’ is a magnificent introduction to the multi-faceted but melodic score, full of layered tones that take audiences from playful prance to poignant dignity and back again.

Any good “Cats” has to create a visual spectacle, and with over 40 performers on stage at times, this is certainly the case with this production, starting with its cats’ purr-fect pre-show audience interactions as they sneak and strut throughout the stalls, making the memory of my first experience of the show on London’s West End live again. Schonell Theatre’s large stage allows for Jo Badenhorst’s dynamic choreography, which is strong and engaging but general enough to allow for all levels of participation. Still, numbers ebb and flow as each individual cat tells the audience their backstory.

This “Cats” is characterised by an impressive attention to detail. Costumes capture the individual characters of the cats, beyond just their different fur patterns, especially in the case of the befallen Grisabella, however, no costume (except maybe a cane prop addition) can make the wise patriah Old Deuteronomy appear appropriately elderly when he is moving so nimbly across the stage.

The complex set, which serves as the backdrop for the entire musical, is complex, with built-in entrances and exits, and also platforms and levels on which the performers can stand and move around. The oversized junkyard staging also contains many Easter-egg details like graffiti from the mystery cat Macavity (Christopher Morphett-Wheatley), a monster of depravity of which there is no like, and a book pile that includes ‘Phantom of the Opera’ and The Bible (the musical is full of religious symbolism beyond just the Moses-like leader of the cats, Old Deuteronomy’s share of name with the fifth book of The Bible). London mentions are effectively peppered through things, but the Mungojerrie and Rumpleteazer’s number is oddly over-accented, meaning that the athletic and playful young cats’ antics as knockabout clowns and quick-change comedians are overshadowed by lost diction

As anyone familiar with the contentious show knows, its structure is quite unique, as an anthology rather than through-lined plot, with each cat getting opportunity to introduce themselves and share the story of their life, loosely tied together by narrator and second-in-command of the Jellicle tribe, Munkustrap (David McLaughlin). As the storytelling tomcat, McLaughlin is able to direct audience attention at will, thanks to his commanding voice and physicality, even when just in unmoving stance.

It is the leather-clad Darcy Rhodes as rebellious alpha loner ladies man and lime-light lover Rum Tum Tugger, however that gives the most engaging and memorable of performances, and not just in his song, ‘The Rum Tum Tugger’ and his ‘Magical Mr. Mistoffelees’ number, which both radiate with infectious energy (and vocal talent). Even when he is not center stage, he absorbs audience attention in his unfaltering commitment to his flirtatious, swaggersome character, down to the littlest nuances of gesture, movement and stylised changes of position. And how wonderful it is to see him returned to rockstar status after the 2014’s revival’s reimagining of him as a ‘street cat’ rapper. Also noteworthy is the delightful, measured performance of Eric James as Asparagus, (Gus) the elder Theatrical Cat with shaking paws, reflecting with reverence upon his life on the stage.

It is so unfortunate that, on opening night at least, the cast was let down by the show’s lighting and especially sound, which, dropping in and out as it did, effectively ruined Act Two’s ‘Growltiger’s Last Stand’ music hall drama tribute as part of Gus’ reminiscence about his favourite role in the old-fashioned melodrama, as well as sections of other songs. For audiences unfamiliar with the musical, the lyrics lost due to microphone lapses in early numbers would assumedly make the story more difficult to access.

There are still some standout numbers, however, such as Skimbleshanks The Railway Cat’s (Jonathan Taufatofua) tell of being unofficially in charge of the night train to Glasgow, during which a moving locomotive train is formed out of objects in the rubbish dump. The ensemble number is not only full of fun, but it represents the energy and spectacle that is at the core of this production, which is visually lavish and joyously dynamic in intent and realisation… mostly.