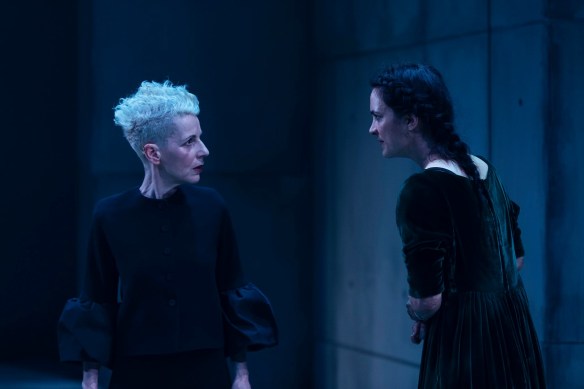 Sophocles’ Angione is more than two million years old, yet as a story with conflict at its heart, it is still relevant today as Queensland Theatre’s epic season finale, “Antigone”, written by Merlynn Tong, illustrates. While there is a clear 2019 resonance to Antigone’s (Jessica Tovey) passionate activist rebellion and rejection of authority, however, the Greek tragedy is presented not so much as her story as much as that of the new leader of Thebes, Creon (Christen O’Leary). Indeed, while young Antigone is a fierce and powerful female who stands up for her values despite powerful criticism, hers is not the main conflict of this play as her power struggle with Creon morphs into one between Creon and her son Haemon (Kevin Spink), who is engaged to Antigone.

Having Creon played by a woman breathes new life into the text. Not only is the character transformed from a weary man suffering the burdens of rule to an alert and assertive political powerhouse, but it means that the play is no longer just about a woman challenging the patriarchy. Tong has written an adaptation for modern times in many ways, not just through its feminist representations. “Antigone” leads us to consideration of the parity of sorrow as only those whose lives are given in service of the ruler are worthy of mourning; because Eteocles died that way in a civil war, he is afforded a state funeral and a public display of grief, whereas because his brother Polyneices was killed fighting on the other side in recent hostilities, his body has been left to rot and his soul forbidden to be put to rest. By order of Creon, anyone who honours Polyneices with burial does so on pain of death.

The grieving, heartbroken Antigone, sister to the dead men (sons of Oedipus and Jocasta) and niece to Creon, is determined to do right by both of her brothers and so the epic argument rages on in realisation of the prophet Tiresias’ (Penny Everingham) foreboding forecast. And as Antigone challenges Thebe’s leader for the right to bury and mourn her dead brother with dignity, the great city of Thebes, as well as a family looks set to be torn apart.

Rather than a Greek chorus, at the play’s opening, we were presented with one of many operatic musical moments from Shubshri Kandiah (as Antigone’s radiant sister Ismene), which elevates the tragedy’s emotion. Despite a lengthy opening song and monologue from Creon, the show is pretty tight, thanks to the excellence of its cast, as compelling performances cut through the sometimes lengthy monologues to engage the audience. 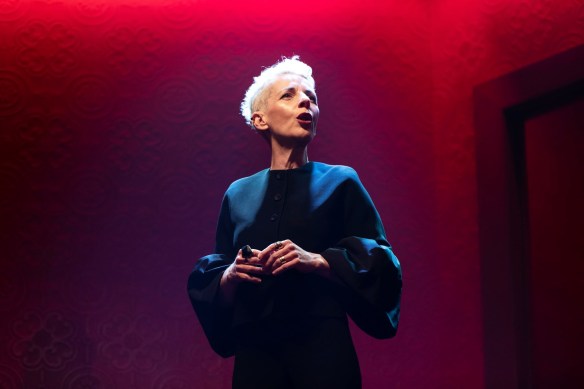 Tovey’s Antigone is strong and purposeful… a determined young woman who believes nothing is more important than the debt owed to family and the dead. Spink is also impressive as her ill-fated fiancé Haemon. It is O’Leary, however, who delivers the show’s standout performance. Her scenes of eloquent political oration are riveting in their authenticity down to the nuance of gesture as she channels the confidence, passion and voice modulation of the most purposeful of political speakers. Rather than just conveying stubborn calculation, she infuses the character with a vulnerability the elicits our empathy.

Staging is deceptively simple but effective, as Queensland Theatre continues to show audiences new ways in which the Bille Brown Theatre space can be used. Ben Hughes’s rich lighting design befits the story’s big theme and Tony Brumpton’s sound design assists in amplifying the drama. And costumes are creatively detailed, but, like other creative aspects, allow performances rooms to resonate at the forefront of the production’s impression. 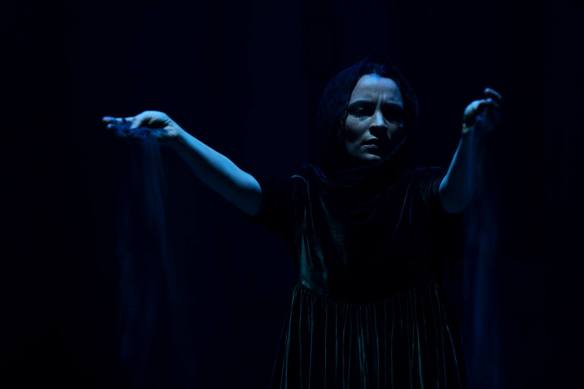 “Antigone” is a strong show, but its’ short and sweet 70 minutes’ duration, leaves some characters unexplored. Still, Tong has done an admirable job of not only refreshing the story while remaining true to the original text, but making it accessible to people who are not necessarily familiar with the classic. Under Travis Dowling’s direction, the story is clear and easy to follow with no prior knowledge of Sophocles’ play, though, of course, familiarity does allow for the fostering of deeper connections. The show’s traditional touch stands it in impressive stead; it is full of drama as all the best theatre should be.