Like Rachel Burke’s tinsel installation that decorates the foyer, there is an infectious sparkle to the Cremorne Theatre as audiences enter for Circa’s acclaimed “Peepshow”, courtesy of a shimmery backdrop and notable neon sign…. sparkle with a bit of burlesque. Performer clothes do come off a bit later with a little help from an audience member of sorts. (This is show with partial nudity, recommended for those aged 15 years and older; take your youngsters instead to “Wolfgang’s Magical Musical Circus” the company show which is playing by day in the same theatre). 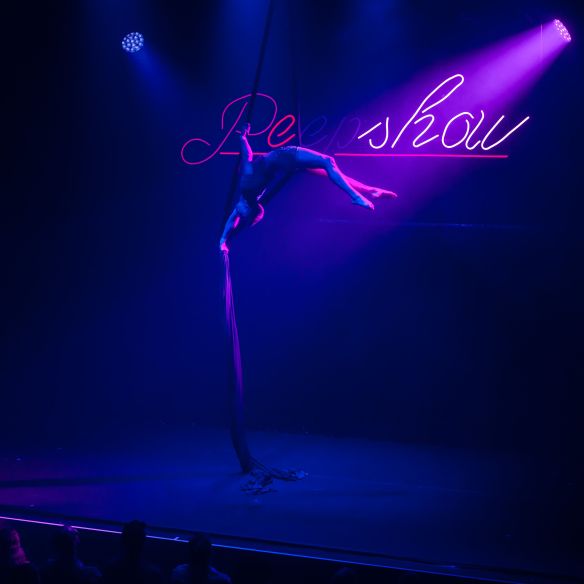 The hit “Peepshow” from Brisbane’s own Circa Contemporary Circus is dynamic from its very outset with a divine Act One soundtrack that features beguiling reworkings of some familiar tunes like Eurythmics’ ‘Sweet Dreams’. Dreams appear broken, however, as we somersault into a seedier Act Two, in which the soundscape basses along as jerky and exaggerated dance moments morph into circus moves. The show is based around the concept of voyeurism and in Act Two, the audience often appears as a mirror in front of which performers pep and preen themselves, before sensibility is turned back to the gentler beginnings of Act One’s physical feats. 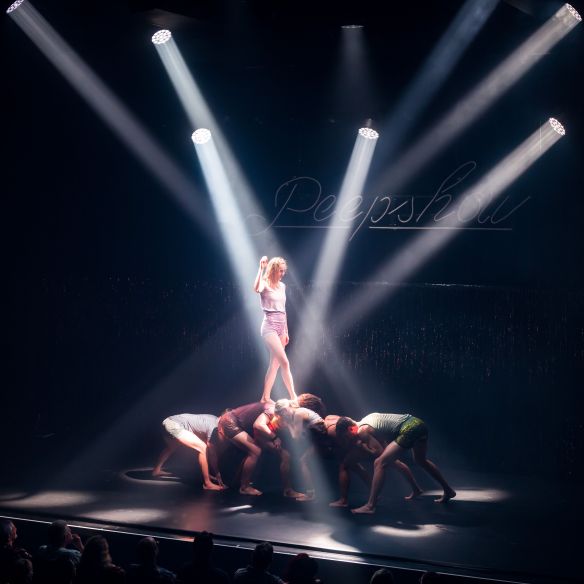 This is a technically tight show with slick, sleight-of-hand type transitions but its success comes from more than just the thrill of its risky formations. The cheeky attitude of performers engages and creates a connection beyond just experience of its captivating acrobatic tricks. There is a lot of lifting, but other acts also, including stylish hoop routines, mesmerising aerial silk climbs, wraps, and drops and gravity-defying trapeze tricks.

Director Yaron Lifschitz has given us a circus show for adults that turns the genre on its head… literally, as time and time again its seven performers (Ela Bartilomo, Jessica Connell, Luke Thomas, Maggie Fayne, Gerramy Marsden, Lachlan Sukroo, Billie Wilson-Coffey) astonish with an array of aerials, towers of balanced bodies and bending that beggars belief. While the show is often sexy in its sensibility, however, it doesn’t subscribe to the traditional idea of a peepshow; its women are strong, powerfully controlled and incredibly flexible as they anchor others atop their shoulders and balance performers on their torso in arch pose.

The show’s triumph is also its tight ensemble work as performers use balance and counter-balance to perfection, sustaining intensity throughout, especially in their human pyramids and twists and turns while balanced atop each other. Indeed, they make complex contortions look effortless, but still show sparks of spontaneity that give a life to that work that is not always seen in circus shows. 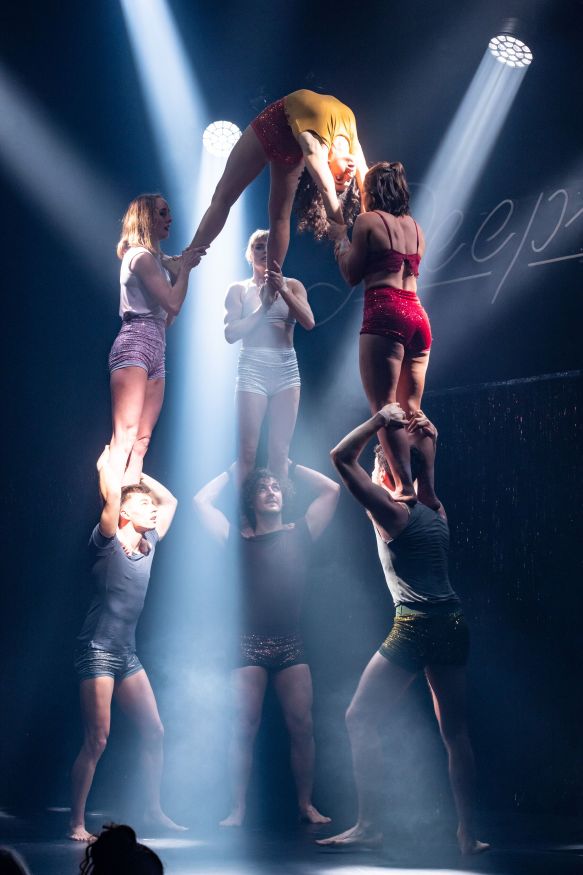 As with “Humans”, “Peepshow” is clearly a celebration of the beauty and strength of the human body through its stunning display of breathtaking moves. Its feats of extreme physicality take circus to another level, revealed through the collective audience reactions of awe and I was certainly thankful to be sedately seated a few rows back rather than being thrust into the front row exhilaration of having performers appear to be flying right at you, in catch and release routines made all the more astounding by their figure of eight rotations complete with leg changes. As thrilling as its execution is, however, there is also a playfulness too with juggling, human skipping ropes and a very clever Fosse-esque glove routine of intertwined hands and bodies. It’s the dramatic bending and flexing of the human body that is most memorable though, especially getting to see someone turn their body inside out to totally touch their own elbows!