Room to Play’s production of award-winning Irish dramatist’s Brian Friel’s one act work “Afterplay” is muted and minimalist, with limited staging, which is entirely fitting given its poky Paddington Substation Gallery setting and the misery of its early 20th Century Russian literary source material. Yet despite this initial gloom, it is not short on wit and its intimacy only increases the immediacy of its impact as audiences are reintroduced to two of Anton Chekhov’s characters, 20 years after their original plays.

It is 1920s Russia when concert violinist Andrey from “The Three Sisters” (Wayne Bassett) meets strong-minded spinster estate owner Sonya from “Uncle Vanya” (Emma Skelton) in a Moscow café. As they share details of their lives and consequences of stories now long passed, it is immediately apparent how equally unhappy they are in endurance of life. It provides both fascinating and forlorn fodder for what is, in essence, a fly-on-the-café-wall audience experience, however, there is an engaging eloquence to the words as Sonya laments the ‘tundra of loneliness’ that lies ahead and Andrey considers the impact of living one’s life ‘in a waiting room’. And Basset and Skelton create some moving moments in delivery of such beautiful writing. Although likeable, however, Basset’s Andrey is bumbling and blathering in his nervous attempts to be effervescent for Sonya, to the point of distraction in the work’s initial scenes. 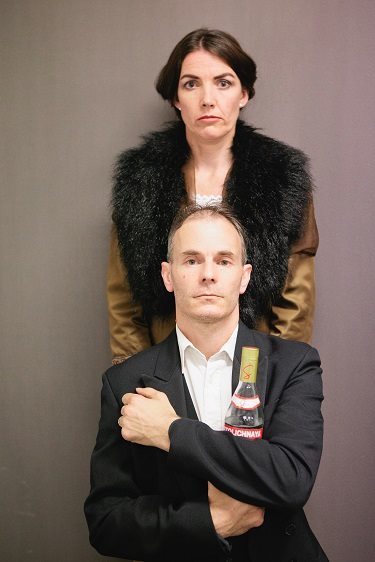 In many ways, the simplicity of the premise of “Afterplay” makes it the perfect show for an independent theatre group, yet in others the text represents an ambitious choice given that in conventional terms, nothing really happens. With vodka, bribery and lukewarm cabbage soup this is very much a Bolshevik Russian experience and of course it is a perfect show for those who love all things from the cult of Chekhov. However, prior knowledge is neither assumed nor needed as prerequisite for appreciation of its ingenuity, especially as intertextual references lie not only with the Russian plays but also Italian opera c/o Puccini and “La bohème”.  And best of all, unlike Chekhov’s original works, its running time is a much more reasonable 60 minutes.