One of last month’s Melbourne Writers Festival unorthodox special events, Second Last Rites, saw Australian actress, comedian and writer Magda Szubanski giving over to the one party she never thought she could attend, her own funeral.  Katherine Lyall-Watson’s “Rovers” is a little like that. It’s a wake though, not a funeral, we are reminded, so serves as celebration of a life lived… in all of its roving yet intertwined memories and experiences, the beginning, ending and everything in between. Some are real and some are creations, but in the hands of two of Brisbane’s best-loved and most accomplished actors, Roxanne McDonald and Barbara Lowing, all are quite entertaining.

Immediately the new comedy-drama from all-female company Belloo Creative is quite meta not just in its outline of the wake theme and warning about the possibility of ‘copping an eyeful of middle-aged flesh’, but also mocked berate of Technical Manager Jeremy for turning out the lights and the ongoing appearance of the stage hand allegedly responsible for the less than perfect prop appearances. It is all very playful and lots of fun as a kaleidoscope of recollections collide, as they do in life. This is especially so in its early scene recall of the childhood memories of the Bogeyman and ‘when-I-grow-up’ ambitions, more intense now than ever with age. And the show’s minimalist set design and stirring soundtrack means that we imagine a lot, as tyres become horses and alike.

It begins with Lowing descending from a desert water tank to meet up with McDonald and from there, the journey through their memories unfolds as the ‘two old girls’ reunite on-stage after more than 20 years. It is a trip through the heart lines of their own lives in revisit of the adventure of the women who made them who they are today, including Barbara Toy (Lowing’s namesake great Aunt) who crossed deserts and warzones in her trusty Land Rover, Pollyanna.

It’s a journey, too that has storytelling at its core, unique due to its personal nature and weave from the tapestry of truth. And the dynamic duo present it as quite the yarn. Indeed, their warmth and genuine enjoyment in its share, emphasises the sincerity of its sentiment and rather than making it overly sentimental, its intimacy only adds to its appeal.

At its core, “Rovers” serves as a reminder that Australia breeds its women tough. But behind the strength is also an essential and enticing charm; these are characters with whom you’d love to have a cup of tea and a natter, or maybe share a hip flask swig. There is a real authenticity to its dialogue and lots of humour too, especially courtesy of McDonald’s straight-talking observations as the fearless Jessie Miller in her fashionable hat.

They may not, as they tell us, do it for the money, but we are certainly glad that they do and under Caroline Dunphy’s direction, the hour-long share of outback tales of trailblazing women flies by as audience imaginations are invigorated and inspired to be, know and raise strong women. It’s like “Thelma and Louise” in terms of defiance, only with an uplifting ending – charming, comforting and colourful, with even a few surprises.

Like many a festival show, experience of Belloo Creative’s “Hanako: Desire & Other Secret Weapons” requires an open mind… and, also, in this case, some comfortable shoes as the initial section of the show takes place behind the Brisbane Powerhouse’s Visy stage, as audience members stand around in observation of a crouched, spot-lit girl with her head hung long. Silence eventually shrouds the scene as we watch and wait, interrupted only by the periodic passing train sounds from the stage proper. As she raises her head, her face flashes red lipstick and eye shadow as the only colour in an otherwise muted pallet of greys, before she collapses again having plunged a sword into her stomach in ritual suicide.

As audiences then move to their seats in the theatre, it is under instruction to search for the truth between reality and fiction… a search which is certainly realised by the end of this vivid, intelligent and intense work. Sparked by a classic Japanese tale of dominance and desire, Caroline Dunphy & Katheryn Lyall-Watson’s “Hanako: Desire & Other Secret Weapons” is a dynamic new performance that explores a girl’s battle to escape into the future while warring adults try to contain her in the past.

It begins with Hanako (Kimie Tsukakoshi) as a flowerchild Geisha. Like Bette Davis, she’s precocious and she knows just what it takes to make a pro blush, but she is also very beautiful in character and expression. Some time later, Hanako is discovered by Loie Fuller (Caroline Dunphy) who is determined to make the actress the star of a Japanese touring company and deliver devastating death scenes in each performance in guarantee of a nightly showstopper. But when Hanako meets a music boy (Zachary Boulton), she no longer wants to perform, and so starts her precarious journey through a frenzied stage world where all of her creators fight to control her destiny. 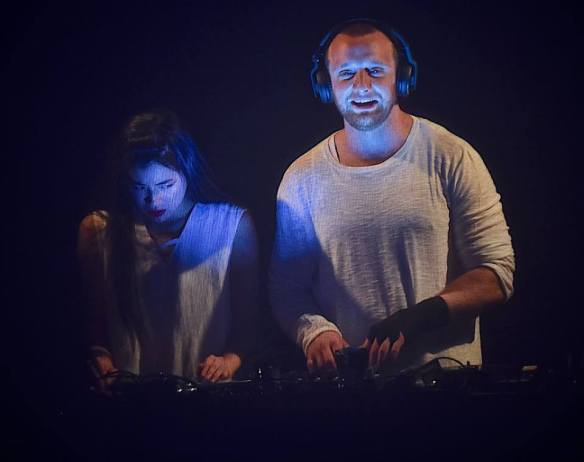 Much is packed into the contemporary production’s 65 minute running time as it takes this classic Japanese tale of Ota Hisa, a dancer and favourite model of Auguste Rodin, who created a series of masks of her, the largest number of portraits he ever made of a single person, into a new reality. Shades of other works feature strongly; indeed, the work represents a hybrid of styles from moments of “Madame Butterfly” to “Kill Bill” moves and even some Japanese game show sensibilities. From theatre to martial arts and urban fashion, there is something on offer for everyone, including even some mochi, served during a little break in proceedings. 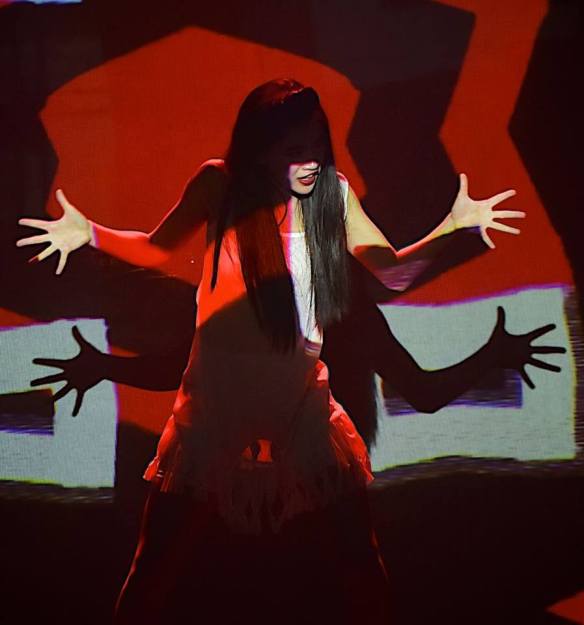 The production is helmed by an international cast. As the urban myth girl Hanako, Tsukakoshi is dynamic and commanding in her stage presence, particularly in pivotal moments like her dramatic on-stage suicide re-enactment. And she is also strong vocally in delivery of a powerful musical number. In balance to this, Boulton and Noriaki Okubo provide some light-hearted moments that work well in conjunction with the silliness of the ‘80s song snippets that sneak into the soundtrack without expectation. Working with Jason Glenwright’s vigorous lighting design, Dane Alexander’s imposing soundscape dominates scene transitions. But there are also moments of quiet too, such is the complexity of this fascinating but still nicely modest work (for the audience is reminded in its ending, truth is stranger than fiction).

“Hanako: Desire & Other Secret Weapons” represents all that is wonderful about festival works and the rich diversity of theatrical conversation that they generate. This is a show for the curious and creative alike. Like Belloo’s previous, acclaimed “Motherland” it sits comfortably in its text, but never forgets the honour of the truth behind mythology, making its World Premiere as part of Brisbane Festival something of which its local, all-female, award-winning independent theatre company should be immensely proud. 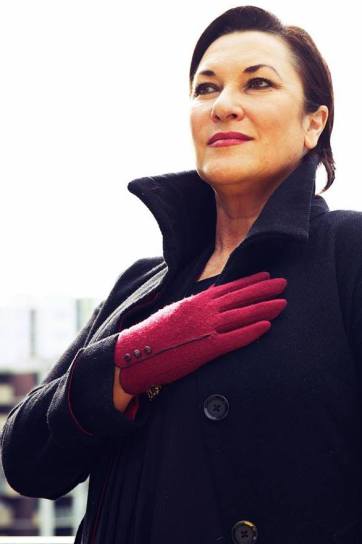 It is fitting that Barbara Lowing’s character is the first to speak in “Motherland”, given that her involvement was what initiated my motivation to see the show. And she is in fine form, immediately engaging the audience with her feisty performance as a 90 year old Russian ‘cabbage with lipstick.’ And Lowing is just one member of what is a talented ensemble cast who each give measured, nuanced performances.

Performances aside, however, what is most engaging about this work is the beauty and intelligence of its narrative. “Motherland” is an epic account. In fact, it tells three stories, set in Russia, Paris and Australia, intricately crafted together. There is the intriguing chronicle of the marriage between Russian Prime Minister Alexander Kerensky and Brisbane heiress Nell Tritton (Kerith Anderson) who lived in exile in our city of ‘Jacaranda eyes.’ There is also the story of poet Nina Berberova (Barbara Lowing) a Russian exile in 1930s Paris and Nell’s lover. And finally, bookending the play is the story of Alyona (Rebecca Riggs), fleeing to Brisbane from 1990s Motherland Russia with her son and her Australian boyfriend, only to be see him caught up in the Fitzgerald enquiry. This all initially makes for audience challenges to comprehend the multiple roles of Peter Cossar and Daniel Murphy. However, once the interconnection of the stories is established, this confusion is diminished, allowing full immersion in what is a captivating narrative.

Cultural issues don’t get much bigger than revolution, yet as what is essentially the tale of three women, the story is about much more than this. It is also shares very personal stories in examination of how historical events can shape relationships and identity and, as such, it is emotional, moving and gripping. This is due largely to the talent of Australian playwright, Katherine Lyall-Watson and it is no surprise to read that the work was shortlisted for the prestigious 2013 Patrick White Playwrights’ Award.

Staging is effective in its simplicity with a just a white doilyesque spray upon the ground and asymmetrical white frames in which characters are often frozen, much like their stories in time. Indeed, the minimalist black and white aesthetic helps in creating a work that is both enigmatic and sophisticated, and enhances the show’s appeal. It was wonderful to experience the show’s world premiere run as part of Metro Arts’ Season of the Independents. “Motherland” is a story of fascination and a moving theatrical work which showcases the strength of both Australia’s stories and Australia’s talent.