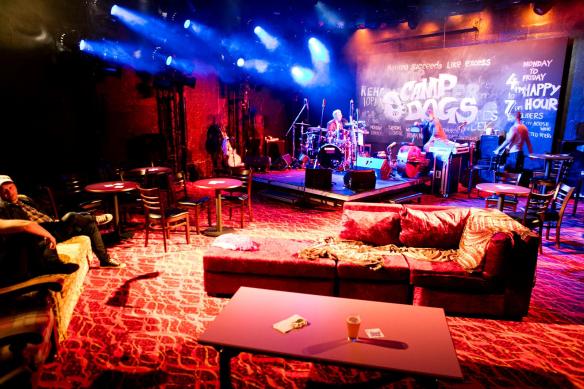 A pre-show soundtrack of Oz-rock classics adds an air of excitement to the experience of audience members awaiting the Brisbane season of Belvoir Theatre’s “Barbara and the Camp Dogs” by Ursula Yovich and Alana Valentine. It’s an effective emphasis of the pub rock atmosphere for anyone who hasn’t gathered the feel of Set Designer Stephen Curtis’ bold aesthetic vision, detailed even down to the corner-stage’s backdrop blackboard advertising happy-hour specials and the gawdily-patterned pub carpet beneath barstools and well-worn couches.  With the audience banked around three sides of the pub stage and surrounds (where some audience members are also seated), a band takes the stage and the scene is set for 100 minutes of raw rock and powerful dramatic performances.

Barbara (Shakira Clanton rather than Ursula Yovich for this mid-week performance) and Rene (Elaine Crombie) are two Indigenous siblings and Sydney performers with their back-up band, the Camp Dogs. When a family crisis calls them back to Darwin and then on to their home town, the complexity of their relationship and, in particular, Barbara’s ferocity, unfolds. And from the time the duo take to the road to trip down to Katherine, when things pick up pace-wise, it is thanks to the pair’s humorous interactions, full of the sarcasm, mockery and the outright insults that are so common in sibling back-and-forth banter. 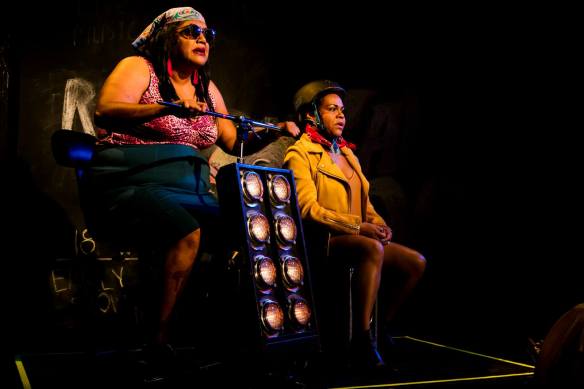 True siblings or not, these two woman sure can sing and songs feature predominantly throughout the production. There are many musical numbers, particularly in early scenes, making it difficult to recall individual highlights, without a song list in the program to assist. The soundtrack starts with loud and energetic rock numbers that vibrate with energy, however, the highlights come when songs slow to more emotional numbers in reveal of Barbara’s drives and disappointments and resulting conflict of belonging. Rather than dominating, music in the show’s second half is used to subtly signal a change in its tone, of the kind not realised until after its occurrence. And its final number, ‘Let in the Love’ with Troy Jungaji Brady serves as an acute reminder of the thematic message at its core.

Elaine Crombie is genuinely entertaining as ever as the personality-plus Rene, however, as is suggested by the title, this really is Barbara’s story. As understudy stepping into Ursula Yovich’s shoes, Clanton gives a sensational performance in the eponymous role, evidenced not only in her angsty attitude but in her harrowing show of grief’s real rawness and confronting monologue about the theft of country, community and culture. It’s a powerful political message moment, of the Get Krack!n finale essential viewing sort.

“Barbara and the Camp Dogs” is a show of big themes explored in intimate ways. Its balance of humour and drama is entertaining, thought-provoking and ultimately moving in that sneak-up-on-you kind of way. Add in its easy-to-follow narrative, absorbing performances and sensational vocal displays and it is easy to appreciate its previous seasons’ successes.

Photos of Ursula Yovich as Barbara

Far North Queensland’s Palm Island is a place of perfect beauty. But this is an image not often projected in the negative media coverage of the Island’s life, especially since the 2004 death in custody of resident Mulrunji Doomadgee, resulting riot, declaration of a State of Emergency and the trial of police officer Senior Sergeant Chris Hurley. That is, until “Beautiful One Day”, from Sydney’s Belvoir St Theatre and Ilbijerri (Australia’s longest running Aboriginal and Torres Strait Islander theatre company), which gives voice to the local Indigenous community with a view towards understanding and a new future.

And the show’s appeal is certainly its authenticity. More theatrical documentary than dramatic presentation, it interweaves personal stories of the performers with court transcripts, interviews with Palm Island locals and re-enactments. Starring in the production’s cast are three residents of Palm Island, including Doomadgee’s niece Kylie who takes audience members from anger to sorrow as she laments of how it breaks her heart to know that her uncle isn’t on the island anymore.

The Palm Island story is, of course, about more than just one incident and the production does an excellent job in balancing its story with initial inclusion of some history of the treatment of Australian Aboriginals on the island, beginning with its hostile origins as a virtual off-shore penal colony for Indigenous Australians under the auspices of the paternalistic Aboriginal Protection Board. A monologue from Dwyer which lists the prohibitions of the Aboriginals ­Protection and Restriction of the Sale of Opium Act’s total control is a shocking reality check, with punishment for its breeches including imprisonment and public humiliation. It also serves as humbling indication of the resilience and strength of a proud group of people.

When the circumstances of Doomadgee’s death from injuries of the type usually found in car and plane accident victims are explored, they are handled from within this context. The result is an intelligent response that sees Hurley blamed but not demonised at the expense of long-term issues. The incident is shared as a recreation, wisely from the show’s non-indigenous actors; actress Jane Phegan shares the verbatim court transcript words of lawyers and investigators, as well as the coroner’s post-mortem report, while Paul Dwyer speaks the verbatim ­transcript responses of Hurley, the officer charged with Doomadgee’s assault and manslaughter (and later found not guilty). 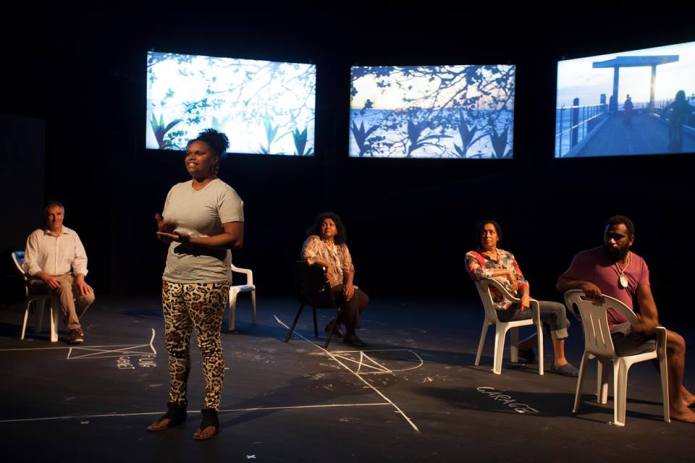 Not only is the recreation enacted live on stage, but it is also used as visual reference upon the four backdrop screens within subsequent show scenes. Although clever in their early-show incorporation of live video, projection of historical documents and photos, and archival footage, at times, there is so much happening on stage already that these can appear as a distraction from the drama. However, the final act inclusion of intercut projected interviews with real Island residents serves the show well, cementing its thematic ambition to not perpetuate blame, but rather foster understanding.

Cultural nationalism in the arts needs to be promoted. “Beautiful One Day” is not just important as an Australian work, but as one that does not shy away from the discomfort of our post-colonial history. It has many confrontational moments, but they are tempered by both humour and poignancy, eliciting an understandably complicated emotional response befitting the importance of a story that continues to have legacy to this day. “Beautiful One Day” is essential not because of its politics, however, but its humanity, making it a perfect example of theatre that matters.