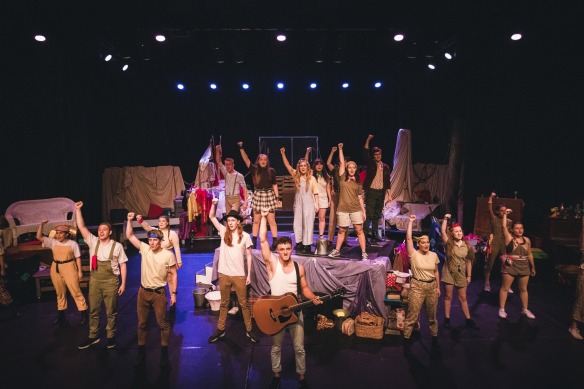 Sometimes the simplest songs can be the most infectious; John the Baptist’s rousing call on the world to ‘Prepare ye the Way of the Lord’ in “Godspell” is one such gem as, like ‘Ease on Down the Road’ in “The Wiz” it earworms its way into your head for days after experience of the musical. The song, which appears early in Act One also sets the tone for the rest of the show which follows with a series of narrative vignettes, led by each member of the rag-tag collective cast in turn.

The 1971 concept musical, which was originally conceived and directed by John-Michael Tebelak with music and new lyrics by Stephen Schwart, is based on a series of parables mostly taken from the first book of the New Testament – the Gospel of Matthew. In the hands of the students of the Brisbane Academy of Musical Theatre Performance Course 2020 the triumphant return season of the show maintains some original seventies sounds, but is as much contemporary culture as it is Age of Aquarius. The result is very entertaining as the vibrant ensemble uses a wide range of storytelling techniques and comedy stylings to share its series of parables, interspersed with music set to lyrics from traditional hymns, and, as such, their messages of kindness, tolerance and love. 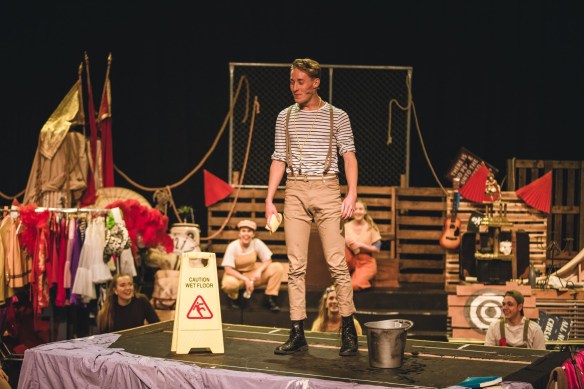 While the work may be quite a lightweight one, part of its beauty on stage is the opportunity it affords for each member of the ensemble cast to have their moment in the spotlight. A charismatic Jesus (Nathan Wheeler) shares some smooth-sounding vocals in the catchy ‘God Save the People’, however, it is Cristian Robba-Colley who shines brightest as John the Baptist. From his rock on into Act One’s baptism of the company (courtesy of a sponge and a bucket of water) to later light and shade moving musical moments, his passionate but-still restrained vocals fill the theatre. Combined with the use of sign-language, they make ‘All Good Gifts’ a captivating proclamation of thanks for all we have around us. And Claire Sutton effectively leads the company in ‘Day by Day’. The show’s biggest hit is also complimented by paired-back choreography that allows its sweet simplicity space to breathe. Indeed, Callum Mansfield’s choreography works well with the other production elements throughout the show, utilising the entire crowded Hayward Street Studios space to amplify the work’s essential message of celebration.

An eclectic blend of songs, ranging in style from gospel to vaudeville, pop and even a patter song, is employed, allowing for beautiful vocals and harmonies to stand alongside energetic, personality-filled celebration song and dance numbers like Act Two’s high-energy emotional transition, ‘We Beseech Thee’, led by Clark Bryon-Moss in an energetic impish jester role.  The exuberant cast keeps the show’s frenzied approach fever-pitched, making Act Two’s earnest solemnity a welcome slow-down for Judas’s jealous betrayal. Even so, the rising tension between Jesus and Judas (Luca Camuglia-May) that crescendos in its second act, in this instance, feels added rather than hauntingly integral. 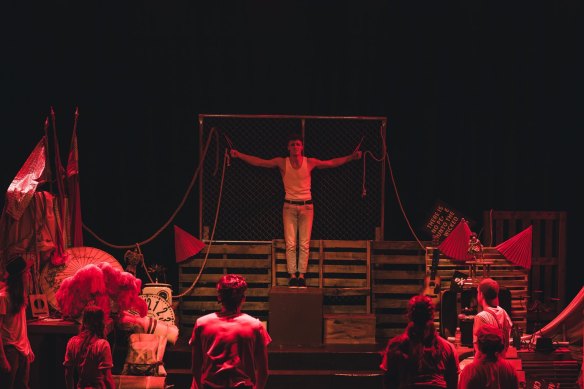 Things slow with the start of the parable of the Sower of the Seeds, however, the high energy continues into an intermission of audience interaction. Pop culture nods are peppered throughout, like the props that peek out from every nook and cranny that has been created in its bohemian staging. A highlight comes when the popular parable of the Good Samaritan is performed as a Pixar, play-within-a-play. Humour is used to steady effect, which enhances the production’s accessibility; the show is very funny, partly due its ability to make fun of its self. To maintain this energy, its approach to the timeless parable tales feels a little rushed, meaning that some audience familiarity serves as an asset, so as not to have to play catch-up in recognition of its loose New Testament story arch. 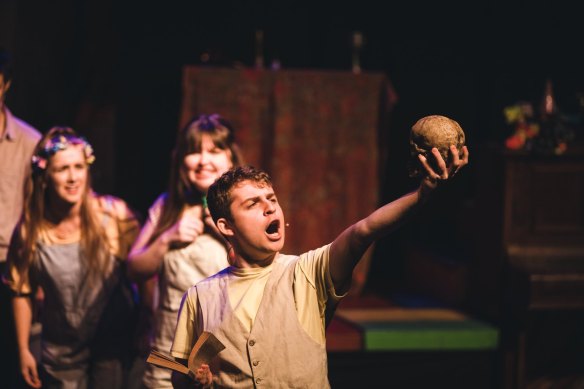 ‘Come Sing About Love’ the return season advertising flyer appropriately urges, for “Godspell” is certainly a show to make audiences smile. While its whimsical hippie-style approach to Jesus and the Bible may have been considered blasphemous when it was first performed, now we can just enjoy its joyful celebration of its idea that spiritual life is of importance. Essentially, the musical is less to do with organised religion and more to do with building a community, as Jesus leads his disciples through a series of moral lessons. With such uplifting entertainment at its core, it makes for a most wonderful, full-of-fun night out, especially a time in which unity of approach has become so important.