I Just Came to Say Goodbye (The Good Room) 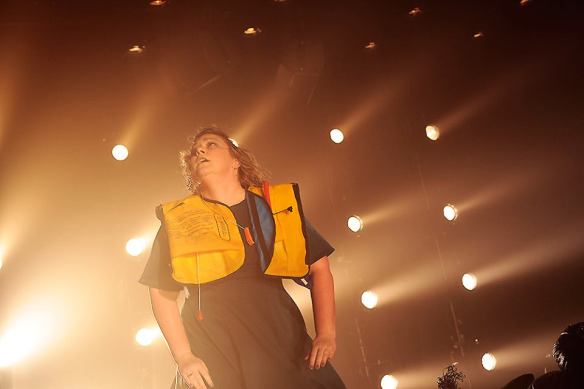 Like their earlier shows, “I Should Have Drunk More Champagne” and “I Want to Know What Love Is”, The Good Room’s “I Just Came to Say Goodbye” is derived from a deceptively simple premise; shared, anonymous submissions of fragments and memories, confessions and admissions, become the basis of the script. This time it is forgiveness and regret, with the true contributions of forgiveness yearned, earned and unfortunately absent, filing the spaces between tell of a bigger real-life story from recent history. And this is where the show’s strength lies… its basis in truth, even if it is initially diluted by a superfluously long dance sequence by an ensemble of stagehands. Although it is to establish that we are all on a flight together, it’s more dodgy than dynamic and a foil to the force of the story that follows, though that is probably the point.

When, in 2002, two planes collided over Germany due to human (air traffic controller) error, Vitaly Kaloyeu lost his wife and two children amongst the killed passengers. It is this tragic story upon which the work hangs, leading to an extreme aesthetic experience of full black out, terrifying crash sound blasts and brutal lighting courtesy of Composer/Sound Designer Dane Alexander and Lighting Designer Jason Glenwright.

Things are fast and furious with an apocalyptic sensibility, but also, at times, tender in heartfelt vulnerability and visually quite stunning as, through share of the anonymous contributions, the audience is sucker-punched with an array of emotions in scenes of anger, intimacy, humour and tragedy, from heavy-duty stories of assault and aids infection to more lighthearted tells of school dance disagreements and karaoke song theft.

The ensemble cast appropriates every opportunity for connection from the material. Amy Ingram’s forthright delivery of details of the DHL cargo plane and Russian passenger jet collision allows the audience to bring their own emotion to its story. In contrast, Caroline Dunphy is tender in her description of the before and after of the crash site, but powerful too in her share of people’s sometimes shocking contributions. Thomas Larkin and Michael Tuahine bring a dynamic energy to the ensemble’s physical scenes, especially a spectacular, complex fight experience (choreographed by Justin Palazzo-Orr). 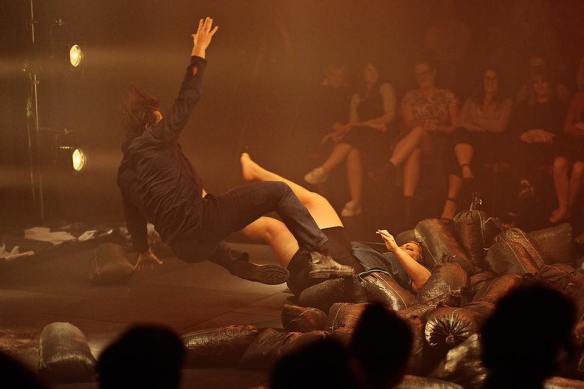 In Director Daniel Evans’ hands, “I Just Came to Say Goodbye” avalanches the audience in sound, lighting and emotion, with a pumping soundtrack to boot. Some moments lag a little indulgently, but when it is at its ferocious best, it is a beast of a show that deserves experience more than just read of its description. As is often the case with the best theatrical events its craftedness is only really appreciated upon reflection of its heartening final, positive message about the power that can come from forgiveness and the importance of finding ways to move forward.

Sometimes the anticipation for a show is so great that its season sells out in advance even of opening night. For those who saw the initial 2013 Metro Arts season of “Motherland”, the fact that this has happened in advance of its Mainstage season at the Queensland Theatre Company, is, in this case of little surprise, given the epic, multi-layered story’s poetry, passion and ultimate intimacy.

Katherine Lyall-Watson’s “Motherland” is a sweeping dramatic retelling of actual events, based on years of research and writing. At the core is Nell Tritton (Kerith Atkinson), whose father owned Triton Furniture Emporium in George Street). After leaving Brisbane in the 1920s to work in Europe as a foreign correspondent, she fell for and, just before the outbreak of World War Two, married the exiled Russian Prime Minister, Alexander Kerensky, before returning with him to Brisbane in search safety. During earlier exile in 1930s Paris, she has an erotic friendship with fellow (and much more accomplished) Russian poet Nina Berberova (Barbara Lowing). And finally there’s Alyona (Rebecca Riggs) who flees 1990s Russia with her son and her Australian businessman lover to Fitzgerald-inquiry focussed Brisbane.

The successful realisation of the complex three-generation story about these different but linked women requires precise direction and Caroline Dunphy’s deft hand ensures that things move fast with tight transitions between scenes. Timeframes and settings interweave and actors play multiple characters, which all add to its fast but satisfying pace. However, for some unfamiliar with Russian history key points, there may be initial confusion with regards to separation of stories and a few more strategically scattered references could have helped in this regard.

This is a story of strong women, appropriately brought to live by three talented actresses. Lowing, in particular, is captivating in her complex characterisation of the writer and academic Nina, particularly when returned to Russian in her twilight years, haunted by the ghost of her younger self. As the feisty 90-year-old with no patience for platitudes, Lowing shares both humour in her cantankerousness and humanity in her emotion. She could not shine as she does without the subtle, impressive work of Riggs and Atkinson’s compelling performance as the passionate yet controlled Nell. And then there are also Peter Cossar and Daniel Murphy, both of whom transition effortless between multiple roles in support of the work’s female protagonists. Murphy is particularly engaging as Alyona’s son Sasha, confused, dissatisfied and initially frightened when left alone in a Moscow Pizza Hut as he mother goes to defend the barricades in the city’s 1991 coup.

The transportation of audience members through the annals of history is supported by simple staging and a vibrant soundscape, effectively used in combination with spotlights to convey the fear of military threat. And lighting efficiently illuminates the silhouetted bookcase backdrop of the Russian literary world to the comparative and deceptive brightness of Brisbane. 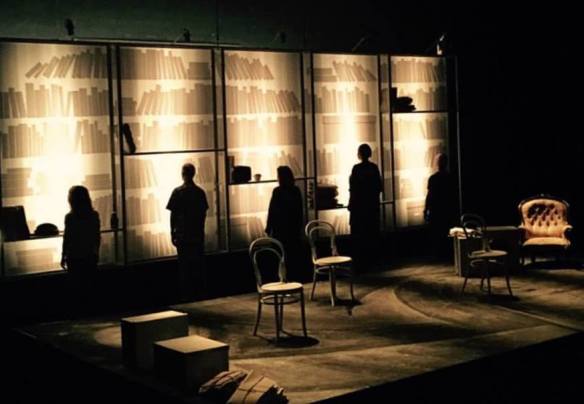 “Motherland” is a sophisticated theatrical work, well-crafted to engage audiences in its intelligent and heartbreaking stories. Not only does it capture a moment of our city’s history in intriguing glory, but it also has universal appeal in its examination of notions of identity. With an accomplished cast re-united to take the audience on its emotional journey, “Motherland” anew is a monumental show that needs to be seen by those who like their theatre to encompass historical and cultural themes, and thankfully for regional audiences there is more “Motherland” to follow with its Queensland tour.