“Gasp” is a reworking of the first play by internationally renowned comic writer Ben Elton, originally starring Hugh Laurie… and it shows … #inagoodway. So fans of Elton’s sitcom “Black Adder” will surely delight in the show’s sharp, irreverent humour. More than this, however, the work is filled with accessible political and social satire to engage even the most causal of theatre goers; it’s like a more vibrant David Williamson work.

“Gasp” (originally “Gasping”) has been reimagined in a contemporary Australian context (Elton’s homeland of the last 25 years), where the country has gone giddy on the resource boom. Mining is the only game in town and Lockheart Industries is leading the pack (if god wanted to buy into Lockhart he’d have to think twice and talk to his people). Inspired by the asthmatic Peggy (Lucy Goleby), clever, low-level executive Phil (Damon Lockwood) impresses company head Chifley Lockheart (Greg McNeill) when he creates the ‘Suck & Blow’ filter machine to produce clean air because ‘if you don’t have suck and blow, the rest is just hot air’. As sales skyrocket, Phil becomes a corporate superstar. So slick is the ensuing advertising campaign that there are times within Act One where you might find yourself considering the merits of a better class of oxygen (because other people’s air just gets right up your nose), ahead of the government’s announcement of a national suck and blow network.

Staging of this QTC/ Black Swan State Theatre Company co-production is as slick as a steam room big business deal. The opening image of a red Arne Jacobsen chair centre stage against gleaming white corporate surrounds sets the aesthetic tone and a luscious lighting design fills the space with floods of glorious colour. The multi-media screen backdrop is used with versatility to allow for inclusion of media snippet insights into how the world beyond the Lockheart offices is reacting to the innovation and subsequent division of the planet into the haves and the have-nots (if you can’t pay, you don’t breathe). The dynamism that this brings to the story again cements the brilliance of production designer Optikal Bloc’s Midas theatrical touch.

As protagonist Phil, Lockwood eases into a performance that is sometimes reminiscent of Prince George (Hugh Laurie’s loud mouthed idiot “Blackadder” character) especially in the delivery of lines about “women all round the world walking around with Aussie beaches in their boobies” (thanks to silicon from sand), however, his dialogue is sometimes encumbered by long and obscure analogies. There is also an inherent humour to Steve Rooke’s portrayal of the smarmy Sandy, Phil’s initial superior at the firm. His dramatic nature and libertine tendencies are are played to perfection (reminiscent of television’s Douglas Reynhold character in “The IT Crowd”) in physicality and vocal inflection. As a muppet of marketing, where nothing goes without saying, Caroline Brazier is a delightful business-class babe; her matter-of-fact delivery and the comic timing of her bitchy comments provide some of the biggest laughs of Act Two as she sets her sights on the naïve Phil and reveals in air snob superiority. 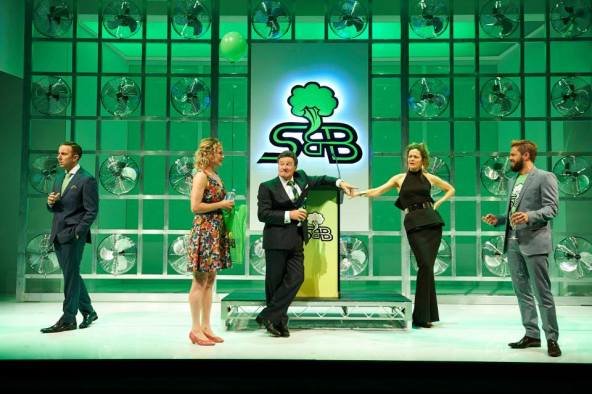 Despite its sharp humour, “Gasp” is not without conscience and moral questions feature at its core as the environmental impacts of oxygen stockpiling and privatisation begin to emerge. Indeed, its final moments of salvation are a comforting conclusion after two hours of unscrupulous corporate corruption and unethical behaviour, as big business goes bad, prioritising profit over humanity, which is, unfortunately far too recognisable. This topicality is what gives the play so much of its appeal; it is a show rooted in time and place due to its plentiful pop culture references. From Tony Abbot and Joe Hockey to Clive Palmer and Gina Rinehart, Lara Bingle, Miranda Kerr, Tim Tams, Target and “Farmer Wants a Wife”, to “QandA”, “The 7.30 Report” and Tassie tree huggers, this essentially corporate comedy includes a favourite line for everyone, making this a perfectly placed end to the 2014 QTC season. While its wit makes it quite a talky play, its razor sharp humour makes “Gasp” quite hil-AIR-ious.