From the lengthy merchandise stand queue and costumed audience members in the eclectic crowd, it was clear even from just experience of the pre-show foyer that we were in for something special at “The Origin of Love – The Songs and Stories of Hedwig”. And in the final show of his debut Australian tour, the Tony Award winning actor/director/writer John Cameron Mitchell did not disappoint, delivering a killer rock concert with stories, built around his own experiences developing (along with Stephen Trask) and then playing the lead role in the glam rock musical “Hedwig and the Angry Inch”.

Long before the rights of transgender people started to become a mainstream issue, the rock-punk musical and then film (which he wrote, directed and starred in) gave the world the titular gender punk character and ‘internationally ignored’ songstress Hedwig. Born Hansel, the transgendered Hedwig is living in communist East Berlin with dreams of escaping over the wall, when she is coerced into a botched gender reassignment operation by her American boyfriend. When the operation goes awry, she is not only left with an ‘angry inch’ but a lot of aggravation as, now living in the US, she tours the country with her rock band, telling her life story and following the former lover and band-mate who stole her songs and has now made it big.

Clearly the influential cult rock musical was not only ahead of its time but has stood the test of time, given that so many audience members were on their feet to hail Mitchell’s entrance on stage ‘whether you like it or not’, adorned with Hedwig wig (designed by Mike Potter) and an impressive costume of wearable art, created by Erik Bergin, which evolves as the performance progresses. From the beginning strains of his ‘The Origin of Love’ opening number, the audience is entranced by his tender voice in what is a gorgeous study derived from Plato’s theory that, having been split in two by vengeful gods, human beings are in constant search of their other halves.

Mitchell has a fine voice that is showcased in the evening’s variety of song types; it is rich and full of feeling, regardless of if he is singing of longing or angst. From a playlist of Hedwig songs with addition of numbers from his forthcoming musical podcast, “Anthem” and sci/fi romantic comedy film “How to Talk to Girls at Parties”, ballads are given a soft touch in contrast to fierce punk numbers. The anthemic ‘Wig in a Box’ not only has audience members joined together in singalong, but results in a mid-show standing ovation. And the rockabilly powerhouse ‘Sugar Daddy’ is almost as deserving as it offers Mitchell opportunity to bounce into audience interaction.

The show may have started late, but it rocked on for longer than the advertised 90 minutes and nobody was complaining. The backing band, led by Andrew Worboys is excellent and special guest artist Amber Martin on vocals, is sensational, especially when given centre stage to share with us a blistering version of ‘Ziggy Stardust’ in contrast to the sensitive ‘Milford Lake’ from the 2003 special Hedwig tribute album, which adds a new layer to Hedwig’s story.

Mitchell is a compelling performer, not just in vocal delivery, but as he meanders the audience in and out of loosely linked stories of the movie and the early days of the then off-Broadway show, including encounters with stars like David Bowie. Although there are touches of political commentary, the show is more about storytelling and Mitchell is clearly a skilled and engaging storyteller, able to whisper the large Concert Hall audience down to virtual silence as shares personal recollections and philosophical reflections alike, explaining the lyric content around Aristophanes and the origin of love myth that is woven throughout the Hedwig story, alongside interjection of local references. He is also clearly quick-witted and very funny, and while he may not have a taste for XXXX, he has a put-upon ocker Aussie accent that is almost as impressive as his Tony awards. 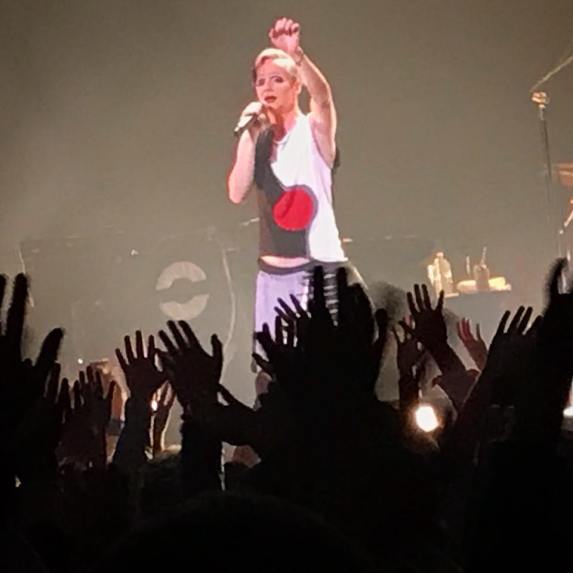 Although accessible to everyone, “The Origin of Love – The Songs and Stories of Hedwig” is an experience best appreciated by the converted who know what to expect in terms of Mitchell’s dynamic and energetic stage presence. It will leave you with a smile on your face, not because it funny (although it is), but because it is so wonderfully joyous, from its collective on-cue lift up of hands during the refrain of ‘Midnight Radio’ to the infectious craziness of Mitchell’s crowd-surfing across a sea of audience love during the on-your-feet show conclusion, the eponymous ‘Angry Inch’ punk rock anthem of defiance and raw energy. Indeed, the free-form party is not only a celebration of queer, punk and theatre, but a brash reminder of the constructive power of anger. And while issues of gender fluidity as focus for political and public conversation in recent history may be front of mind in its 2018 context, ultimately the show, like “Hedwig and the Angry Inch” itself, is about more than this in its salute to self-love and respect.

Sometimes it takes seeing a movie on big screen to truly appreciate its greatness. And “Hedwig and the Angry Inch” is a great movie, iconic in its incredible tell of an ‘internationally ignored’ rocker from communist East Berlin who sings about his manhood being cut off in a messy operation, hence the title of both the film and the  band of Eastern-bloc musicians with whom Hansel, now Hedwig, tours the pit stops of America. Its screening and concert performance, “Hedwig 15” (in gala celebration of its 15th anniversary) as part of Brisbane Powerhouse’s Melt Festival celebration of queer arts and culture is reminder not only of its hilarity, but its soundtrack of explosive glam/punk sensibility.

Regardless of the still-light-outside starting time, sisters, brothers, misfits and all the others unite in celebration of the immortal white trash style icon with some even dressing in homage to the genderqueer singer. Certainly this is a unique event, complete with packets of gummy bears (in nod to American sugar-daddy soldier Luther’s enticement) placed about the stalls, a bar within the theatre and encouragement for audience members to move about during the show.

And then, before the film’s credits have even finished rolling, the concert section of the show belts into being with Bertie Page’s take on ‘Tear Me Down’, which opens the soundtrack and sets the scene for Hedwig’s journey, starting as a slip of a girlyboy behind the Berlin Wall. Sando Colarelli too, brings a brazen rock energy to the liberating anthem ‘Angry Inch’, recreating the song’s vocals and later capturing the film’s essence of rock excess in a soon-to-be-torn-off chrysalis-like costume of plastic sheeting. 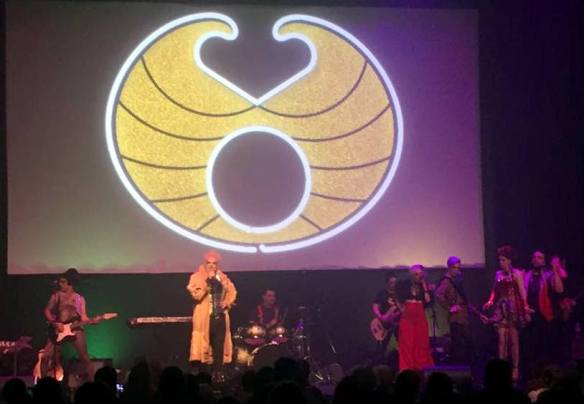 The soundtrack alternates rock ballads and reminiscences as Hedwig searches for completion and a fully realised sense of self on road to becoming an ‘internationally ignored song stylist’ and things slow down to the more melodic during ‘Wig in a Box’, arguably the film’s musical pinnacle, during which Josh Daveta sings of Hedwig’s comfort in the transforming power of wigs, make-up and rock music with masterful vocals. Lucinda Shaw, too, brings impressive vocal energy and emotional resonance to the fiercely determined ‘The Origin of Love’ and its deeply tender explanation of the desperate desire to become whole and connected with other humans. And her share of the soundtrack’s anthemic reconciliatory final song, ‘Midnight Radio’, is simply sublime in its toast to world’s enigmatic souls and the power of being our authentic selves.

The show’s killer soundtrack is skilfully supported by an all-star band led by James Lees with Shiv Zimmermann, John Meyer, Kevin Haigh and Parmis Rose, which allows each performer to bring their own artistry and embodiment of Hedwig’s characteristics to their selections. James Halloran, for example, is emotionally vulnerable in ‘The Long Grift’, a song that didn’t make the movie cut in its entirety but is a worthy inclusion for its highlight of how, during Hedwig’s vendetta against former partner Tommy, she becomes blinded to the feelings of the loved ones around her.

In the hands of Electric Moon, it is easy to see why this soundtrack has gained such a cult-status since its humble beginnings as a stage musical before movie. With only a ten song setlist, the ‘In Concert’ section of the show is over way too soon, much like Electric Moon’s last, “Ziggy Stardust”, outing. Still, its essential, sincere themes linger past its punk sensibilities with message about the hope of turning misfortune into personal power and celebration of the unique.

“Hedwig 15” like its namesake inspiration is rich in imagination and daring. The songs are explosive in their exploration of the ideas of ideology, love and destiny and they are delivered with the raw power and emotion required to have audience members on their feet Hedwigging-out in dance and sway with abandon at just 8pm, in mutual celebration of fact that we all either are or can be Hedwig.