ALF is a tough game, a rough game, a fast game. And at 23, Brent Lyall (Jamieson Caldwell) is its brightest star. As a two-time Brownlow medalist, his name is known by everyone in Melbourne. But this club captain and cash cow has a secret; he likes to cross dress as Carmen (aka Carmen Getit). He likes the way he looks and he likes the way it feels. But, as the audience is repeatedly reminded, he’s not gay, isn’t transsexual and doesn’t want to be a woman.

Enter his manager-funded financially-ambitious trophy girlfriend (Annie Last) and an old-school, relentless sleazy sports journalist (Trent Baker) and the stage is set for drama, comedy and some fabulous frocks, in accordance with the long theatrical traditions of cross dressing and gender confusion. The result is a humorously predictable theatre experience that plays on the popular conventions and cultural psyche insights that make David Williamson’s works so popular.

And Williamson knows football. His hugely successful 1977 satire, “The Club” captured the macho world of Aussie Rules in its behind-the-scenes portrayal of the Collingwood Football Club. “Managing Carmen” still, unfortunately, contains two-dimensional characters. Brent’s agent Rohan (Brandon Burke) is throwback to “The Club” days and sports journalist Max is a stereotypical character of little depth. Brent, however, is somewhat refreshing in his intelligence and introspection; he likes to watch documentaries and prefers self-obsessed girlfriends who won’t always be asking what he’s thinking.

And this is Brent’s story. A big brother style image of his face as backdrop dominates the entire production. Caldwell gives an excellent, accessible performance as Brent, even if his portrayal of alter-ego Carmen sometimes ventures into Chris Lilley, “Ja’me: Private School Girl” territory.

This is a show typical in Williamson style and tone, even if it sometimes slips into slapstick. Beyond the comic fodder of Brent’s revelation and its subsequent management, this is a story about gender and sexual politics, the cult of celebrity and the nature of addiction.

Although transitions are smooth, the numerous short scenes, particularly during Act One, do little to aid in the development of comic momentum. At two acts of approximately 50 minutes each, it is a palatable length and a good night out courtesy of one of Australia’s most prolific and produced playwrights, even if, in many ways, it lacks the witty, sharp dialogue and keen observations that typically personify his work.

“Love Letters” is the sweet, funny, heart-warming story of two people, who share a lifetime of experiences through the medium of handwritten letters. Its premise is simple: smart mouthed, sassy, spoiled Melissa Gardner and her loyal faux-beau Andy Ladd have been writing letters to each other since they were young. What follows is a beautiful, witty and very human story of two people who will never love anyone the way they love each other, as the audience is taken on their complicated, almost 50 year relationship at the heart of each other’s’ largely separate lives.

The most modest of staging suits the show’s premise; the narrative is delivered by the two characters standing at separate lecterns, from which they read their letters. And although there is no other movement on stage, (they don’t step out from the lecterns and rarely even look at each other), it works, proving that simplicity is sometimes the ultimate sophistication.

Act One focuses on the pair’s youthful postcard and thankyou note correspondence, as they share stories of summer camps and poison ivy, boarding school tales of roommates, rowing and dances and the burgeoning sexuality of their College years. Act Two sees the pair of now ‘two uptight old wasps’ sharing the trials and tribulations of their adulthood of travel, loss, love, career, family, vices and regrets. And still their connection remains, a resilient bond that seems to exist more in letters than in reality. In the end, they both realise the importance of their letters to each other and what the correspondence has meant in their lives. As a stuffy, reserved lawyer/politician and a free-spirited, impulsive but needy artist, Andy and Melissa are an odd couple, however, through their flaws, they are hugely endearing in their individual humanity and enduring affection towards each other.

Even without physical movement, real life partners Huw Higginson (“The Bill”) and Hannah Waterman (“Eastenders”), convey the emotion of their story in a way that forges an immediate connection with the audience, especially in the straight-from-the-heart monologues that pepper the production. Waterman is beguiling in her girlish joy, while Higginson is assured in his adult profundity. And the chemistry between the two is charming.

“Love Letters” is not only a celebration of the art of writing, but an entertaining love story about a bittersweet romance. Indeed, it will leave you not only relishing the power of the written word, but also a little tearful in longing to have a Melissa or Andy in your life.

David Williamson’s 2012 play “When Dad Married Fury” is safe theatre of the traditional kind. And there is nothing wrong with that. It is, as it promises to be, humorous and entertaining in that David Williamson way. Williamson realises that there is a reason why the drama of family dynamics features at the core of so much theatre and although this work is one centred around relatives and relationships, it is far from a toast to happy family life.

Brothers Ian (David James) and Ben (Drew Tingwell), along with their better halves, are gathered in Sydney to celebrate the 70th birthday of their recently widowed father, Alan (Denis Moore). Alan is a shonkie, but ruthlessly successful, businessman (worth about $100 million), but also a ‘sex-obsessed old bastard’ who has remarried an American woman known as Fury, who is half his age. Although they are yet to meet Fury, the men are convinced of her untrustworthiness and, as such, are keen to secure their intended inheritance.

Like the brothers, the audience must wait to meet the Fury of the title. We hear her described as a heaving-breasted former beauty queen, half Alan’s age, so expect a stereotype. When Annie Last finally takes stage as the larger than life title character, three-quarters of the way through Act One, she is actually quite engaging and personable…. until she begins discussing her narrow-minded, fundamentalist Christian beliefs and Tea Party allegiance, whereupon it appears that she’s a nutter.

But this is where things start to get interesting, not in terms of character relationships so much as the script’s detour into discussions of politics, religion and business. And although it is set in the aftermath of the 2007 financial crisis, there is still much of relevance within its subject matter, with sharp dialogue that is, for example, peppered with comments about the arts, artists and funding.

As arts academics from near-to-Byron-Bay (where the hills are alive with the sound of pottery wheels), Ben and particularly his wife Laura (Tanya Burne) are the moral oracle of the audience. Laura’s progressively more inebriated party interactions are a highlight, for her performance as much as the insightful accuracy of her social commentary. They epitomise the light-hearted nature of Act One, the levity of which is also reflected in the sharp lighting and simple set of coloured panels, allowing swift transitions and naturalistic use. 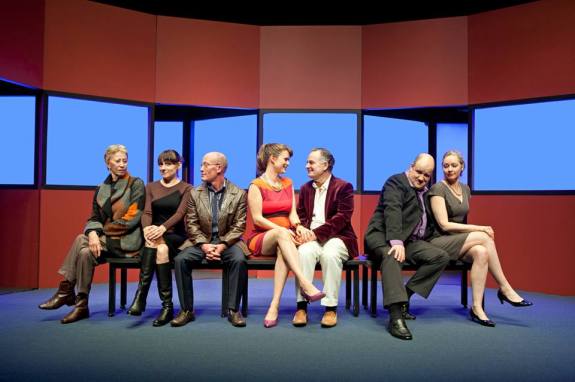 To a certain extent, Act Two subverts the stereotypical expectations established before interval as Williamson throws in some plot twists and starts to flesh out the stereotypes. In fact, it is soon apparent that these are not archetypes after all, but three-dimensional characters, with their own stories to tell for, as the dialogue reflects, there is no black and white in a world that no longer operates on handshakes and looking someone in the eye. Indeed, things unravel in Act Two as secrets are revealed and old wounds opened. Although the most interesting character is Fury, who emerges as not just a colourful character but a complex one, there is focus also on each brother’s marriage.

While “When Dad Married Fury” is, as it promises, a story of family relationships and greed, it is also a witty, well-paced exploration of the resoluteness of belief systems and ideologies in contemporary culture.  And when it comes to a traditional theatre treat, you can rarely go wrong with a good dose of Williamson political and social satire.