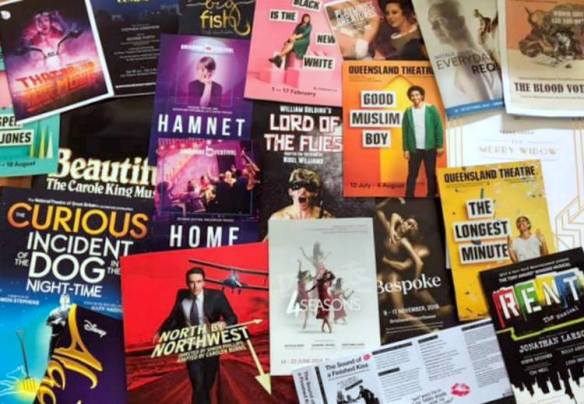 A quick pre-Christmas trip to Melbourne this week has not only give me my favourite theatre experience of the year in Calamity Jane, but provided a chance to reflect on a theatre year now done. Although still in the triple digits, I saw fewer shows in 2018 than in previous years, because…. Netflix. And, as usual, there have been many highlights, making it difficult to providing a definitive list of favourites. But reflective lists are what the end of a year is all about, so here is my eclectic top 10 of the memorable, the musical, the moving and the mirthful, and some honourable mentions.

And mention also to the following highlights: 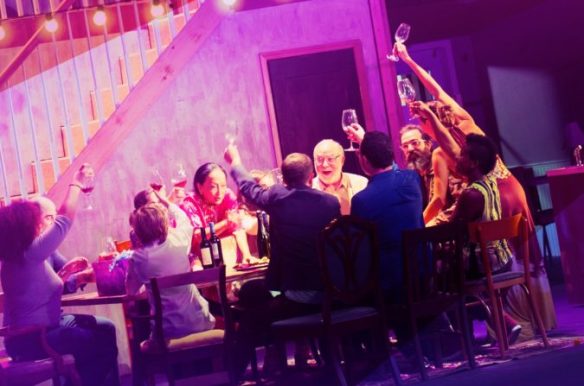 I thought I knew what I was in for with “Home” from its blurb…. “On an empty stage, a house is conjured from nothing. You watch it fill room by room as generations of inhabitants go about making the house their home.” I also knew that the Geoff Sobelle/Beth Morrison Projects’ work contains virtually no dialogue, which had me concerned, given how easily my mind can sometimes wander from the on-stage action without words to keep it in-check. This was, however, far from the case, given the intrigue of the execution of its unique premise.

The dynamic show has an intimate introduction as a man (Geoff Sobelle) begins to build a house out of wooden frames on the bare Playhouse stage. Before long we are wowed by the appearance as if out of thin air (Illusion Designer Steve Cuiffo) of the beginnings of a bedroom, fragmented in memory. Then, magically, an open-fronted, two-story house is built on stage using an actual house frame (Set Designer Steven Dufala) and furnished for its everyday use and transformation into a home. Props appear and characters change almost instantaneously meaning that it takes some time to even fully realise how many performers are involved in its inexplicable construction. It’s an ambitious concept, especially when executed without words, but with it comes remarkable reward, as under the skilful direction of Lee Sunday Evans, the company creates a spectacle unlike any other you are likely to see on stage.

The Illusion is, in part, achieved through the show’s sustained, astounding choreography (David Neumann). With French farce frenzy, performers are simultaneous in their timed entrances and in unison in action as they all duck and weave, for example, around each other in morning bathroom routine, as the multiple characters who have lived in the house at different times. As the sun rises and sets on new days, we see all of the house’s residents at once, going about their daily putting-out-the-rubbish type routines and suffering through the discomfort of summer heat and rainy weather alike. And the sentiment of the piece is clear as the home’s inhabitants celebrate, suffer and live, making the place their own with addition of photos on the stairway wall, adding their own design to the study and even just in going through their own unique morning routines. So while it is the story of a house, it is also about bigger thematic concerns about the stuff of life as we are provoked to considered what it means to create a home…. All without words. It is quite a powerful experience. 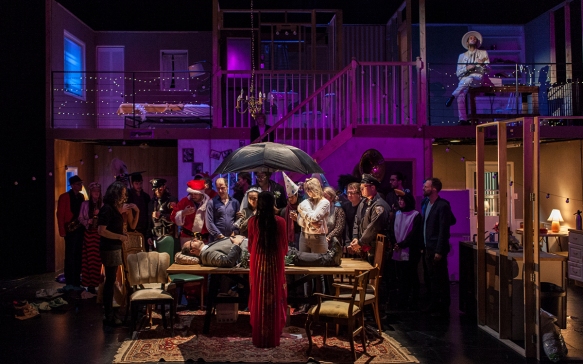 Along with the everydayness of occupants’ routines come momentous events as a dinner party becomes a surprise birthday celebration and then a graduation, wedding, fancy dress do and finally a funeral. And as an audience we are invited along with mass audience participation of all sorts, not just in rig of the party lights over the Playhouse stalls, but on stage as partygoers and performers. And how appropriate, for me to have a QPAC stage debut featuring a scene under the covers in bed, given my preference for #septemberisnosleep as a Brisfest hashtag.

Although it is without interval, “Home” is really a show of two halves. While it is initially thoughtful in its themes, around the question of what makes a house a home, it is also full of fun, appropriate billed as a ‘magical house party’. This is true, particularly in its latter section, because how can you not have a good time when there’s a Viking in the kitchen, Santa in the study and a penguin in the dining room, all to the accompaniment of a roving brass band. Its Australian premiere is certainly another coup for the Brisbane Festival, but its season is a short one, so get along quickly to challenge your ideas about what theatre looks like (#inagoodway), whether you make it onto the stage or not.

The saying goes that where there is a cup of tea, there is a story, so it is comforting to enter the foyer of QTC’s Greenhouse to see a tea station of china mugs and tables covered in vased flowers and doily-like decoration. It is a sense expanded upon as the audience enters the newly-named Diane Cilento Studio, which is lush in delightful detail. Its aesthetic is immediately warm and welcoming, thanks to the scattered chair cushions and the sounds of Travis Ash playing piano. And then there is the backdrop. What begins as a collage of photographic moments in time, as the show progresses, becomes canvas for a tapestry of memories and art, and some wonderful use of shadows. With Perspex panels with inset doors and windows, covered in key quotes, it is almost more of an installation and its changing shape is well-orchestrated through movement and multi-use of its mismatch of chairs and boxes.

‘The map of memory has its own continuity’, states one of the quotes that appear scattered around the stage and it is this notion that proves integral to the show’s premise and structure as, like memories, its narrative meanders about while, from deep in her soul, Margi Brown Ash shares stories from her actor-self, wife-self and mother-self lives. These occur in Egypt, New York, Sydney and Brisbane and like life itself the result is sometimes as much tearful as full of humour, strength and wisdom. The effect is provoking as well as pleasing in examination of lessons of life, loss and laughter. The show also weaves its way through return to the story of “Osiris and Queen Isis” which Ash shares in its opening as her favourite Egyptian myth in its story of love, grief and re-storying tragedy so new meanings emerge. The way in which ordinary joys and tragedies are blended with extraordinary stories of family and love is exquisite, balanced as they are by Travis’ delivery of social and political monologues as counter balance to the domestic stories.

This is very much Margi Brown Ash’s show and she proves herself to be a thoroughly generous performer, both on stage and pre-show in her greeting of the audience guests with whom she will be sharing her story (for her story is our story). Indeed, “Home” proves why she is an asset to any production; her dynamic energy and ease on stage are a delight to watch.

“Home” is a friendly show. Not only are audience members comforted by connection with content, but many are invited on stage to participate in the drama and assume roles of various people from Ash’s life. This is never confronting but rather entirely supported and in keeping with generosity of spirit that surrounds the production, and these moments add much gentle humour and appeal to the experience of the show.

There’s is an energy that some theatrical works have that is immediately engaging and “Home” has it in abundance. It is difficult not to be unmoved or untouched by its heart. It is life and it is art in the form of a charming, deeply-moving experience that will continue with you in contemplation of the extraordinariness of ordinary life laid bare, long after you leave. If you were not lucky enough to experience its sincerity in its earlier incantations at Metro Arts and La Boite Theatre, do not miss the opportunity to share in its stories c/o the Queensland Theatre Company.