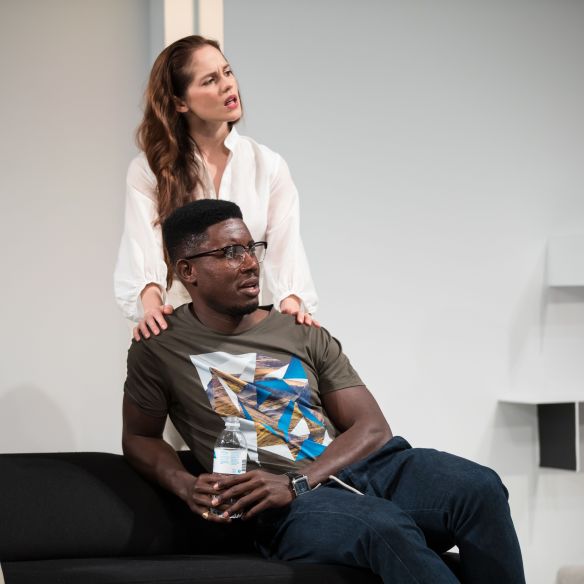 The first thing to notice about Queensland Theatre’s “L’Appartement” is its stunning set from designer Dale Ferguson. The impressive transformation of QPAC’s Cremorne Theatre into the modern, stylish Parisian apartment of the title is reminiscent of when “Disgraced” took to the Playhouse stage in 2016, and there are some similar themes also. The sleek, minimalist, contemporary apartment appears to be a perfect reflection of its perfect occupant couple… but this is not their story. 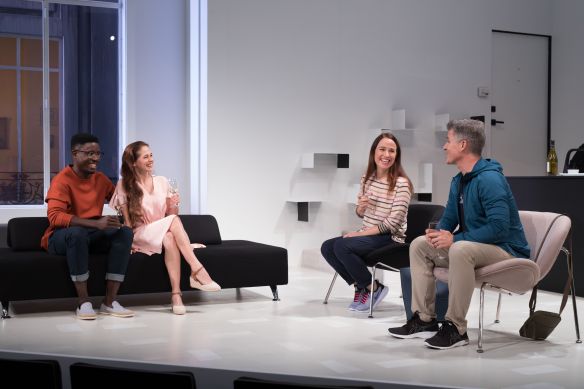 The bulk of the play is about ordinary Australian couple the ockerish PE teacher Rooster (Andrew Buchanan) and his wife Meg (Liz Buchanan) who have come to Paris to renew their relationship by finally taking their postponed honeymoon, now that their twins are toddlers. When the couple is greeted by their professionally high-flying Airbnb hosts Serge (Pacharo Mzembe) and Lea (Melanie Zanetti), it is easy to appreciate their apparent comparative feeling of inadequacy, making their reaction when finally left alone in the apartment very relatable. 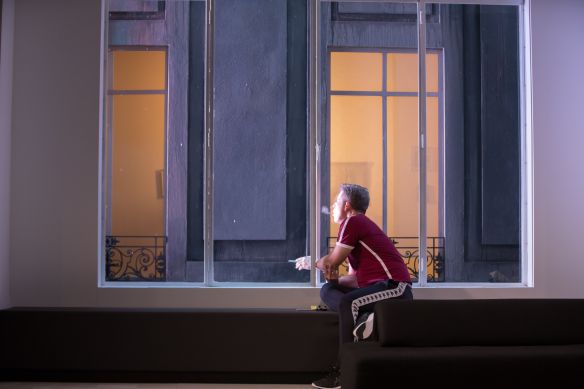 Over the week of their reconnection, we witness the couple go from the joy of alone time, which wine first worries and the usual tourism concerns of seeking out quality coffee, to expose and re-evaluate their life together and the true nature of perfection. As Rooster remarks during later drama, all families are mad and those that look normal are especially so. As audience we see the truth of this statement when a large artefact is delivered to the apartment, causing conflict within the couple as they contemplate some big issues around privilege, entitlement and cultural appropriation and, when their French hosts return, racism too. Indeed, it is a testament to the skill of writer/director Joanna Murray-Smith’s sharp writing that such thoughtful themes can transition so naturally from the laughter that characterises the play’s early scenes. 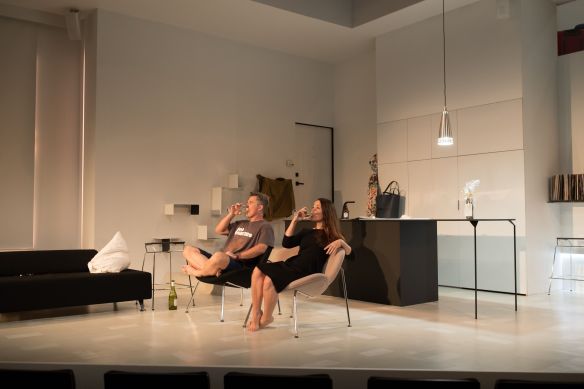 “L’Appartement” is a very funny play, thanks to the precision of its execution and the brilliant comic timing of Andrew Buchanan, however, on opening night at least, the  continuation of dialogue under audience laughter means that some moments are unfortunately lost. In pair, Andrew and Liz Buchanan also add humour in their in-unison reactions to their too-good-to-be-true hosts. And the fact that the couple are married in real life means that the intimacy of Rooster and Meg is engaging in its effortlessness. 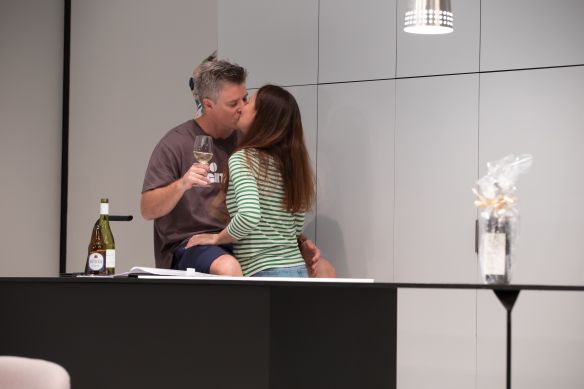 Mzembe and especially Zanetti are actually wonderful as the French overachievers who actually ooze sophisticated to the point of sanctimony, especially upon return from their allegedly ethically responsible holiday abroad. Special mention to accent coach Helen Howard on making them seem authentically French down to their nasal vowel sounds and tense consonants, all with an accompanying attitude. The performance of the acclaimed cast, combined with the clever writing of its playwright makes “L’Appartement” a thoroughly enjoyable comedy with tragic undertones and just the right amount of tension. Its protagonists are honestly flawed, relatable and very real people and while its staging is minimalist in design, it has a noticeable attention to detail, creating a scene all too familiar to those who have experienced the city of love’s architecture of ornate wrought-iron balconies and the inconvenience of its inclement weather. The contrast of chaos and order both literally and psychologically means that there is much to contemplate too, beyond just the laughter of its culture clash meeting, making this a Queensland Theatre production to love.