Did you know that Mariah Carey fans are referred to as Lambs, collectively known as her Lambility? Attendees at Josh Daveta’s “Like Mariah” probably do, given that, at times, the show seems more like a support group for the songstress’ superfans. As such, there is a wonderful feel to the night as Daveta often relocates from the stage to move amongst the partly-cabaret-seated daahlings of the audience in celebration of everyone’s favourite diva Mariah Carey.

The show, which was first seen last year at the New Globe Theatre is playing in 2018 as part of the Melt Festival of Queer Arts and Culture. And it seems there may be no better place to pay homage to the ultimate angelic-voiced, gay-icon diva. In many ways, the more intimate setting of the Turbine Studio seems like a better fit too, especially in suit of inspirational and emotional ballads like ‘Thank God I Found You’.

Clearly Daveta is a Mimi fan, measuring his life by what Mariah song was a hit at the time, he tells us. Appropriately then perhaps, “Like Mariah” takes its audiences on a journey through many of Carey’s eras, from the expected classics like ‘Fantasy’ to the pop hit ‘Always Be My Baby and dancier numbers like ‘Make It Happen’. In all instances, Daveta’s stunning vocals glide between the elusive chanteuse’s classics in evocation of the full dreamy Mariah sound. He slays the vocals in ‘My All’, conveying both tenderness and power in tell of the loneliness of wanting just one more night with an estranged lover, and the polished melody of her iconic debut single ‘Vision of Love’ again make it a show highlight. 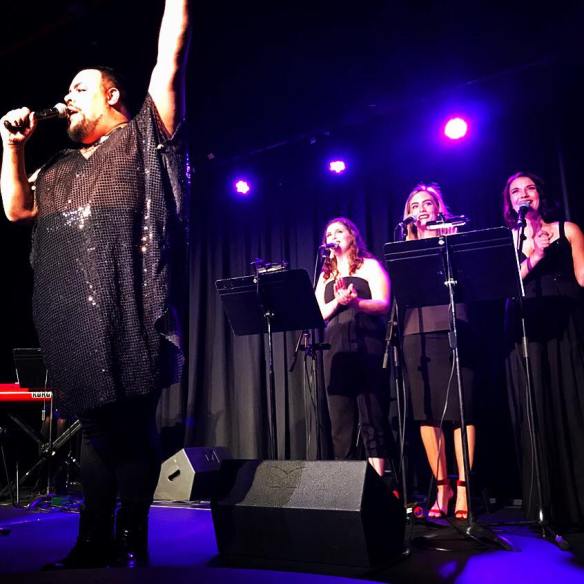 Daveta is a generous performer, always reminding us of his backup singers’ (Frances Walters, Erika Naddei and Cassie George) own outstanding vocal skills and we spend a lot of the show’s time in repeated acknowledgment of their admittedly excellent vocals. Dare I say, like in Carey’s 2016/2017 New Year’s Eve lip-sync fail in Times Square, we see George deliver a fantastic, upbeat and lighthearted ‘Emotions’ for the syncing Daveta, while Erica Naddei helps us towards a lovely show ending with ‘I’ll Be There’ in nod to the incredible duets of Carey’s career. Even Peta Wilson on keys is given a chance to show her stuff through, for example, interlude in a bouncy ‘Touch My Body.

Even for those who aren’t fan enough to know Carey’s most recent studio album, “Me. I Am Mariah… The Elusive Chanteuse”, the show still has something to offer. The hits everyone knows are all there and the atmosphere is infectiously fun. The show offers plenty of opportunity to sing and clap along to mid-tempo numbers like ‘Always Be My Baby’ and to marvel about Carey’s number one hits, five-octave vocal range and immense vocal power. There is also a lot of humour as well, through inclusion of a Mariah-style dance break, with requisite attitude of course, and as Daveta responds to audience involvement with the instant wit of an epic diva. But most of all “Like Mariah” is an astonishing display of some of the lushest vocals around. Indeed, in Daveta’s hands the spirit of the Songbird Supreme lives on long and strong.

Despite the infamous New Year’s Eve performance that never quite was or the drama of her “Mariah’s World” reality tv adventure, few can dispute Mariah Carey’s massive and magical voice. And from the moment of Josh Daveta’s ‘Sweet Fantasy’ entrance into “Like Mariah”, there is indeed a spirit that envelopes the room as audience and performers join together in celebration of everyone’s favourite diva, Mimi (just don’t dare mention Whitney Houston).

This is a show full of fun from the bouncy pop melody of ‘Touch My Body’ with swinging piano accompaniment from Musical Director Parmis Rose and audience ‘volunteer’ muse, to a discoesque ‘Emotions’ with channel of backing vocalist Cassie George’s incredibly high upper range vocals, amongst its 16 song set list. And when phone torches are held aloft in sway to the encore of ‘Hero’ there is perhaps no more fitting testament to the complete satisfaction of its audience members than the standing ovation that soon follows.

Those who have seen Daveta before know what a versatile performer he is. In “Like Mariah” he is as charismatic as ever in between song banter and audience interaction. And his vocals are sensational as he goes from a high octave belt to an almost whisper within the smallest of space; his soaring ‘Vision of Love’, Carey’s lauded debut single from her eponymous debut album, is worth the price of admission alone, full of cresendoes and a spectacular belting bridge. 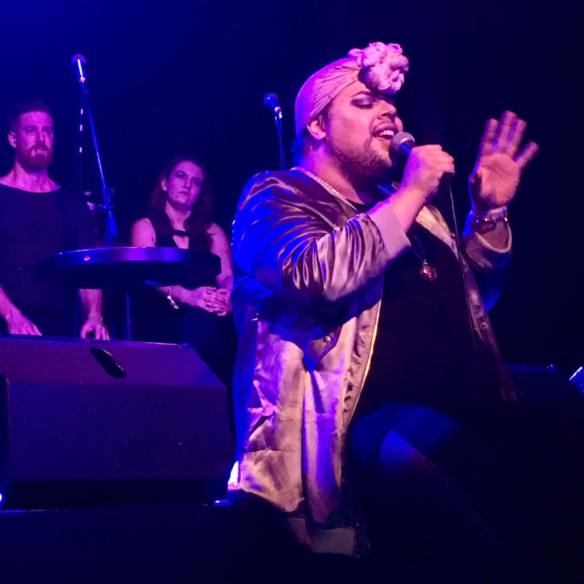 Songs and sentiment journey through all range of emotions, meaning that the smorgasbord setlist includes something for everyone. From a riff-filled, audience clap and sing-along ‘Always Be My Baby’ to a moving, slow-tempo ballad ‘My All’, Daventa’s controlled  bright and clear  vocals serve as the show’s biggest star, sympathetic as they are to each individual song’s key signature, tempo and style… which is entirely appropriate for a show that tributes an artist who holds record as having the most Billboard Hot 100 No. 1s by a solo artist (18), the most weeks at No. 1 of any act (79) and the chart’s longest-running No. 1 of all-time, ‘One Sweet Day,’ with Boyz II Men (16 weeks).

With the support of Rose and backing vocalists Lachlan Geraghty, Aya Valentine and Cassie George, Daveta has created something very special that will hopefully be shared again with Brisbane audiences sooner rather than later.