Sometimes the best theatre stories are told through intimate interaction in real time, set in one location. And as locations go, you don’t get more intimate than sharing space on a tram. In the case of “2 Across”, it is an authenticity that only adds to the experience of this certainly Anywhere Theatre Festival show. And you even get to go for a ride!

It is early morning on the BART (Bay Area Rapid Transit) train from San Francisco’s International Airport when the both-married presumptuous, womanising Tom (really Josh) and straight-laced Rita (really Janet) find themselves as the only two riding in one of the cars. Polite conversation begins over share of their common pastime. But their attempts at completing the New York Times’ ‘sadistic Saturday’ crossword seem to be where their commonality ends. As a clear beginner (using a pencil gives it away), Josh doesn’t consider crosswords as life and death and could easily leave a puzzle incomplete given the equal appeal of the paper’s sports page. To Janet, however, exactness is everything. And given that she doesn’t suffer fools easily, it seems that their interaction might not progress much further. But maybe his loosey-goosey approach to life as a between-jobs advertising executive is just what she needs. 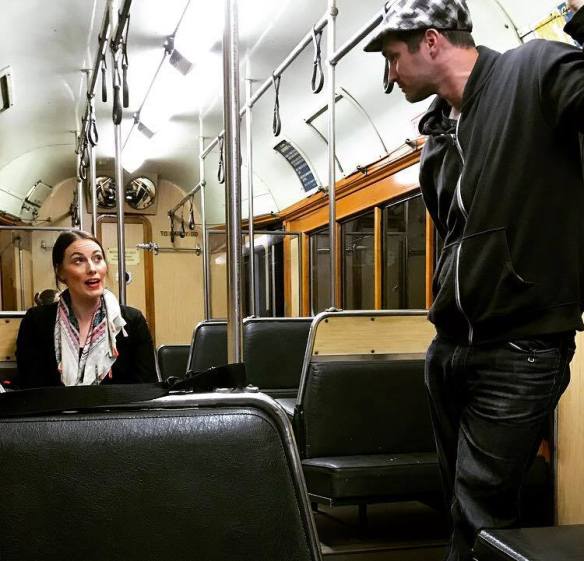 Each has their idiosyncrasies; he has his favourite seat and she is one of those people who says bingo when not playing bingo, which are revealed as the audience voyeurs the unfold of their journey. It’s a journey not just of implied physical distance but of character changes, as the usually very proper psychologist Janet even breaks the rules enough to eat on the train. Indeed, as she attempts to make Josh more sure of himself in preparation for an upcoming job interview, she goes from gruff to giggly and it is clear that there is more at play that just a polite conversation about puzzle guidelines as talk turns to poetry and the intellectual affair that their potentially preordained meeting may have prompted.

With only really its dialogue to rely upon, the writing of a work like this needs to be something special. And it most certainly is, with many quotable observations such as how crosswords can serve as a metaphor for life. There is much wit too and cleverness in its frequent circles back to previous conversation mentions and it is easy to appreciate playwright Jerry Mayer’s seasoned television writer credits (including episodes of “M.A.S.H’ and “The Mary Tyler Moore Show”) in its pacing.

The dialogue-heavy work also means that there is nowhere to hide for its two performers and in this regard they both rise to the occasion. As the organised and sensible Janet, Candice Dittmann is a formidable performer. While Nathan Schulz is wonderful as the free-spirited Josh; even the occasional missed line can be forgiven, given how it becomes absorbed into the natural rhythm of their interaction. Indeed, the snappy delivery of dialogue and believable back and forth between the players makes for an engaging experience that seems to fly by. And Director Schulz does a top job in keeping the essentially static show (two people on a train along with the audience), visually interesting.

“2 Across” serves not only as unique theatre experience, very much in keeping with the Anywhere Theatre Festival focus on performance anywhere outside of a traditional theatre, but also evidence of how sometimes the smallest of stories can be the best. Although its two protagonist commuters may seem as mere ordinary folk, appearance often belies reality and as their conversation reveals the serious life problems and common vulnerability with which each is dealing, we cannot but appreciate the value of that their interaction brings, as well as wonder what might have been had he not just made it time through the closing doors at the train’s origin stop.

You can find all of my Anywhere Festival reviews on the festival website.