When The Rain Stops Falling (That Production Company)

Acclaimed Australian writer Andrew Bovell (“Lantana”)’s story, “When The Rain Stops Falling” takes place between two worlds in time and place, between a prediction in 1959 and its outcome eighty years later, through the interconnected stories of two families over four generations. It is, accordingly, at times quite heavy going, especially given its lengthy running time of 2 hours without intermission (longer that its advertised duration), but worth the investment for its haunting experience.

The show intriguingly begins in Alice Springs in the year 2039 with a fish falling from the sky to land at the feet of lonely Gabriel York (David Patterson). It still smells of the sea and he knows something is wrong. Although this sets the scene for the motifs to follow, including the rain the falls in virtually every scene, the opening 15 minute monologue drags with the weight of prolonged pauses and repetitious dialogue.

What Gabriel doesn’t realise is that 80 years prior, his grandfather, Henry Law (also played by David Paterson), predicted that fish will fall from the sky heralding a great flood which will end life on earth as we know it. In between the two generations lives Gabriel Law (Eamonn Clohesy) who leaves London for Australia, in attempt to retrace his father’s footsteps and understand the mystery of his disappearance from his childhood life (with help from cryptic, recently-discovered postcard communication) only to fall for a haunted and vulnerable roadhouse employee, Gabrielle (Lauren Roche).

So complicated is the interconnectivity to initially decipher, that audiences members need to rely on the projected scene subtitles as to setting in time and place. Indeed, it takes until at least 45 minutes into the production to fully appreciated the cleverness of the work beyond just its coincidences and recurrences, down to the most mundane of motifs as, across the generations, fish soup is prepared and served while characters make small-talkish jokes about the weather.

From a design perspective, the transitions between stories are beautifully realised. A rotating outer circle borders the central stage action, rotating to indicate scene changes and allowing for seamless transitions and clarity when characters from different eras and different selves of the same character sometimes share the stage. The choreography of characters into an initial full family tableau as they silently share in soup around the table is impressive in its intricacy and to see it replicated in the work’s conclusion provides an arresting, yet touching visual resonance of its ultimately intimate themes. 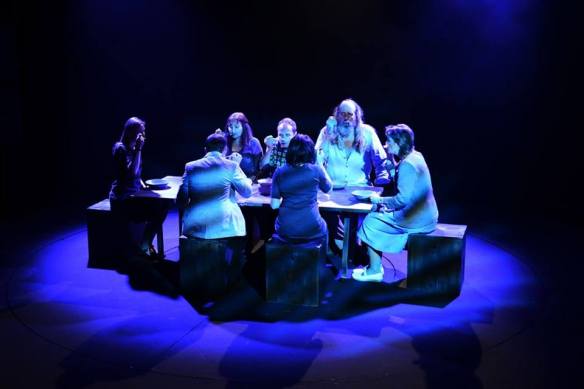 Beautiful visuals aside, “When The Rain Stops Falling” is a confronting, unsettling experience, filled as its story is with unpleasant plot twists. Its characters are not always likeable, however, its shocking twists and moments of sadness are made more palpable particularly through the performances of Nicola Stewart and Rachel Hunt, as different generations of Gabriel’s brittle mother Elizabeth and Lisa Hickey as an older Gabrielle, just as fierce as her former self despite her mental deterioration.

Although fractured, it is a compelling narrative as progressive revelation is made of how the characters have become themselves, meaning that its conclusion that we all exist as a collection of our pasts appears as superfluous in an already-long work that could comfortably have ended a number of times over. While it is certainly a complicated story “When The Rain Stops Falling” is an at-times grippingly powerful and original dramatic experience in its epic examination of mortality, legacy and the connections at the essence of humanity, which will linger long after leaving.