A couple of months away travelling and a couple more laid up with pneumonia and I saw fewer shows in 2017 than in recent years (but still well into the double digits). Reflecting, it is clear that quality over quantity can be incredibly rewarding. And what quality there was on offer… so much so that my usual top five favourite, has been blown out to the following ten:

And mention also to the following highlights:

2018 looks set to continue to showcase both the wonderful work of this state’s creatives and innovative works from both here and further afield. Festivals will continue to punctuate the cultural calendar, serving to oscillate audiences between feast and famine like a cultural bulimic… although with Brisbane Powerhouse’s Melt Festival moving to May (maybe at the same time as Anywhere Festival) it may be a shower than usual start to the year.

If theatre is about making you think about life, then former QTC Artist Director Michael Gow’s “Once in Royal David’s City” (his first play in seven years) is theatre at its best as it takes audiences on a beautiful and emotional journey through life’s phases of hearing, living and telling stories, in exploration of what gives our life vulnerability, but also meaning.

The play tells the tale of a mother and son dealing with the death of a loved one. Will (Jason Klarwein) is a Brecht-obsessed theatre director whose father has recently passed away. He wants to treat his mother (Penny Everingham) to a relaxing Christmas break so they can spend some quality time together. Yet, what sounds like a simple story becomes so much more as the non-linear narrative (with Will as narrator) spans time and location, taking audiences from West Berlin to Byron Bay and from the 1950s to the present.

There are many nods to motifs of Gow’s seminal “Away” in that it sees a family holidaying by the beach at the typically-emotionally charged Christmas time (its title is that of a processional hymn about shattering perceptions of a picturesque nativity with reality, and its program cover is appropriately red and green in its design). However, its use of the Brechtian techniques sets it apart. Indeed, in early sections it seems that this is a show for drama folk, with its frequent references not just to the German director but to classic texts like “The Important of Being Earnest” and “Mother Courage and Her Children”, both of which have also appeared on the Playhouse stage in recent years. But as things progress, the references become more fused with contemporary realism, bringing with them considerations not ultimately appreciated until its final bookend ‘lecture’ on Brechtian theory and technique.

While the show is full of heartfelt moments and silences for audiences to fall into, with lip-biting, ‘I will not cry’ resolution in response to its challenging subject matter of saying goodbye to a loved one, there is a lot of light-heartedness too, including spontaneous song and dance numbers and amusing dialogue, with perfect comic-timing delivery of some early-show one liners. 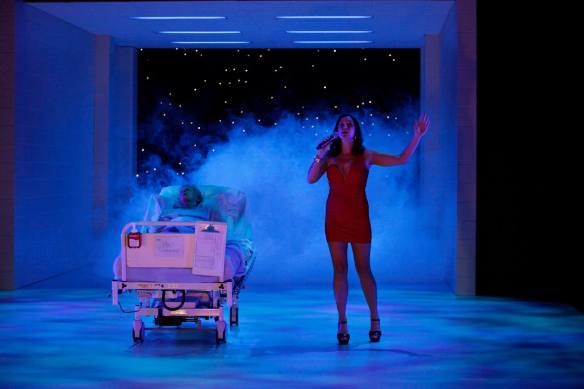 The ensemble cast is a strong one, led by Brisbane’s own Jason Klarwein in the complex leading role. As Will, Klarwein gives a riveting and finely-nuanced performance as a character dealing with emotional obstacles and the very human dilemmas of grief, loss, identity and an associated personal crisis of insecurity within a passion. As his ailing mother Jeannie, Penny Everingham is wonderfully spirited but ultimately vulnerable and Steven Turner, in particular, assumes multiple roles, all with equal ease.

The talented creative team allows the actors to take centre stage. Stephen Curtis’s design is simple yet effective down to the smallest details, such as the hand sweep of curtains that sometimes signpost scene changes. The production benefits from an evocatively minimalist set and Matt Scott’s rich lighting design, which transports audiences between the stark fluorescence of hospital ward lighting to brilliantly backlit shadow play of a Marxist revolution, well-deserving of its opening night smattering of mid-show applause. 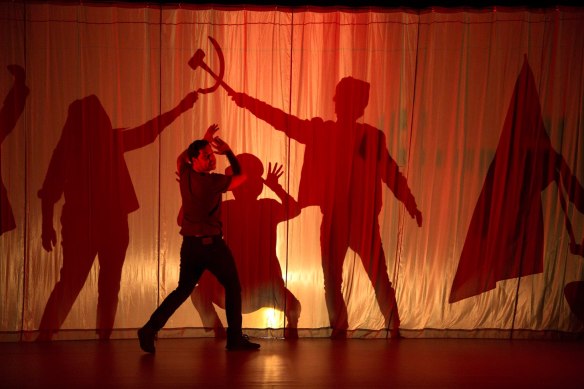 As a co-production with Perth’s Black Swan State Theatre Company, “Once in Royal David’s City” serves as display of all the good things that can come from collaboration. In the hands of Queensland Theatre’s Artistic Director Sam Strong, in directorial debut with the company, it is becomes a sensitive and engaging take of a compassionate story. The wonderfully life-affirming work is surprising, sad and unexpectedly funny, and could only perhaps be better if it were being seen in the festive season itself.

“Once in Royal David’s City” is a beautifully crafted show from one of this country’s best playwrights and, accordingly, there is much to be taken away from its experience, both intellectually and emotionally. Not only are there references to Marxism and Christianity to continue to consider, but its ubiquitous reminder of our mortality and the need to enjoy life to fullest and cherish those special to us are poignant enough to linger as lessons long after its conclusion. And Molly’s (Kay Stevenson) monologue about the blink-of-an-eye progress from carefree teenage skylarking to the increased doctors’ visits that come with age will certainly resonate with many audience members. Still, “Once in Royal David’s City” is an enigmatic show… the type you want to tell everyone you know to see, without revealing specifics about its at-once intimate and epic journey in answer to American physicist and children’s television presenter Dr Julius Sumner Miller ‘s ask, ‘why is it so?’