More than just setting the scene for the seminal story of Ziggy Stardust, David Bowie’s ‘Five Years’, is one of the best emotional crescendos in song. Those not in agreement may just not have seen Lucinda Shaw’s version, which occupies place as one of the many highlights of her Queensland Cabaret Festival Show “Songs of Compulsion”. As her vocals cry out from its sparse introduction in capture of the sorrow, regret, and frustrations of those coming to terms with mortality, audience members know they are experiencing something wonderful. It’s an epic call-back also to one of Shaw’s previous performances in Electric Moon’s 2016 Cabaret Festival show, “The Rise and Fall of Ziggy Stardust” and the set is characterised by a nice balance between time-honoured favourites and original numbers.

The intimacy of The Fortitude Musical Hall’s The Outpost Bar serves as the perfect location in which to experience Shaw’s mesmeric vocal textures. The venue is everything you’d expect from a basement jazz club (if it were upstairs) seductive red and black décor and a grown-up cocktail list accompaniment to graze up against the slow, jazzy numbers on stage. Indeed, its David Lunch-esque ambiance suits the lingering lyricism and tender musical tones that appear as if they are happening in slow-motion, even as Shaw’s powerful vocals reach for the ceiling. This is especially the case as her robust voice rises up and take us down to a tender refrain in Scott Walker’s darkly brilliant ‘My Death’ toast to our inevitable demise, meaning that the audience is enraptured through to its very last note.

True to Shaw’s legacy, the setlist also includes ‘Best Boyfriend’, by local ‘90s feminist folk band Isis (of which she was a founding member) which has this year been released in a rare mix coupled with and even rarer live B-side. In curation with the evening’s other numbers, it illustrates not only her vocal versatility, but a chameleonic style that transcends even to musical accompaniment (by frequent collaborators Mark Angel – guitars, Terry Dixon – bass and James Lees – piano), which ranges from Spanish-style guitar to tambourine and even idiomatic cowbell sound to call our attention. And while the show seems to be over before we know it, as a community craving the vital human connection the comes from live performance, we are happy to be able to support and celebrate the arts again together if only for this 50 minutes.

“Yours Sincerely Banana Brain” is a musical comedy cabaret featuring original music by Lizzie Flynn, performed by The Copabananas (Peter Stewart on Piano, Rory Dollard on guitar, Reuben Johnson on bass and Andre Bonetti on percussion) alongside its characters on-stage at The Old Museum as part of the 2020 Queensland Cabaret Festival.

Her name’s not Lola, but rather Zara (Lizzie Flynn), who is penning a ‘Hey You’ message to a FB friend suggestion of her lifetime ago bestie. And so the audience is taken back to when the younger Zara (Ella Macronkanis) and Violet (Emma Whitefield) meet in circa mid to late 90s at uni on a day it rained and rained (#soundsfamiliar). The two share musical dreams, so after an open mic night performance, they are soon on a road trip to perform together in regional New South Wales, talking along the way about all the paces they want to see.

When songwriter Zara sets out to realise her travel ambitions overseas, the friends’ navigation of growing together and then growing apart as they start to grow older unfolds through sharing of letters. It’s a trope we know can work well (think “Love Letters”), but without much backstory to their friendship beyond its origin by them happening to be in the same place at the same time, it is difficult to become invested in the character journeys on an emotional level with such short exchanges after such little time together. Indeed, from a story perspective, the show seems somewhat rushed, meaning that we are given little in way of resolution or filler as to what has happened between then and now.

Dramatically, “Yours Sincerely Banana Brain” is a work of much potential to grow and develop into a more substantial cabaret show that fosters full audience connection. Musically, meanwhile, it is excellent. Although the songs don’t really move the action along, they do capture Zara’s emotional journey in relinquishing her lifeboat to grown-up life. ‘Happy’ is a The Go Betweens type of breezy highlight with catchy arrangement and melodic vocal realisation. Even if its rap lyric inclusions are not always clear, its sentiment still comes across and it is a wonderful to hear it in reprise in the show’s closing scene. Clearly, Macronkanis, in particular is an incredibly talented vocalist.

In complement of the idiosyncratic letter sign off that appears as the show’s title, there are some appealing quirks to the show’s nooks and crannies, like bunch of bananas atop the piano. There is also a careful attention to detail, in, for example, its costuming, which includes nod to the shared characterisation of the now and then Zara. Most notable, however, is the collection of original songs and stories that weave through the duo’s friendship. Not only does it make for an appealing cabaret premise, but it assists in its clever realisation through the framing device of its on-stage performances.

As if being a sole performer on stage isn’t difficult enough in itself, add in acting in multiple character roles and making it a musical and success is probably going to be no easy feat. Yet, in Penny Ashton’s hands in “Promise and Promiscuity”, the task appears to be a breeze.

In parody of the novels of Jane Austen, the show follows the fortunes of husbandless writer Elsbeth of Brisbaneshire (in this instance) who writes thrilling stories under the male pseudonym Wilbur Smythe and would rather die an old maid than concern herself with frivolity in possession of foolish notions of love.

It begins with Elsbeth’s socially-ambitious mother lamenting over her aged 2 and 20 daughter’s lack of husband, but also excited by the family’s invitation to a ball at Quigley Manor. Things move quickly as Ashton clearly establishes characters with physicality and vocals. To her credit, each character, whether male or female, is well-defined and well-distinguished from each other with their own, unique physical quirks and characteristics, whether it be excitable younger daughter Cordelia or the aloof Mr Dalton, who is search of intellectual endeavour rather than romance.

With such a crowded cast and quick changes, it takes time to ease into the show’s rhythm and unique Austen-like language. There is a veritable array of well-known Austen characters and although there are no wet shirts, male characters are the most memorable amongst the eight that Ashton plays, particularly, a snorting cousin Horatio, unable to offer compliment without also causing offence.

The script is full of witty incorporation of not just quotes for Austen aficionados but motifs that most people should recognise and double-entendre innuendo that nobody can miss. And the Ashtonisation of modern and pop culture references from Trump to Target and 50 Shades of Grey, add an often very funny touch to things.

Original music, composed by Robbie Ellis adds to the experience, especially when a dance partner must be sought from within the audience. Indeed, musical numbers that outline the importance of proper etiquette (to not be a strumpet) and the broken dreams of a family evicted from their cottage after accusations of wanton promiscuity (by writing as a male) could easy work in a mainstream musical.

“Promise and Promiscuity” may not be entirely proper in a Regency way, but it is genuinely good-natured. Ashton’s energy is infectious and, as a naturally engaging performer, she makes the show’s experience all the more delightful. While those familiar with the fiction of its source material, will appreciate its homage, its attraction goes to beyond audiences with this experience. It’s not so much a musical (as billed) but rather a play with some songs about the curse of being a woman in Austen’s world, yet it is still all sorts of wonderful.

When a show is billed as “the voices of eight seasoned cabaret performers will shine Bush’s creativity, imagination and innovation”, expectations are high. Appropriately so, given Electric Moon’s previous shows, and as-anticipated, realised from its opening, beautifully-mournful number, ‘Moving’, by Josh Daveta, with ethereal additions from Bethan Ellsmore. And then there is Alison St Ledger who sounds just like the iconic and unique artist in the meta-music ‘Wow’. 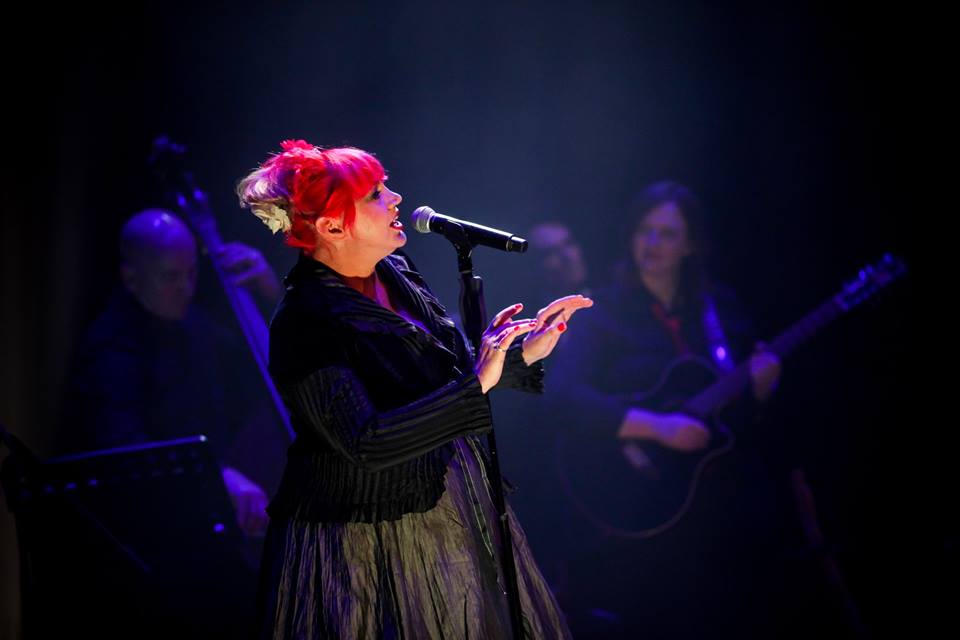 It is not all whimsical, however, with Daniel Hack rocking ‘Don’t Push Your Foot on the Heartbreak’. Indeed, there is something for everyone, from everyone; the stage is cluttered with collaborators (#inagoodway) and the show is all the better for it. The ten piece band, for example, does an excellent job in evoking a variety of moods and genre influences, as eclectic as its source songstress’ musical catalogue.

Highlights include Daveta’s rollicking ‘Oh to be in Love’ and a haunting ‘’Oh England My Lionheart’ from an imposing (as always) Sandro Colarelli. And there is also Lucinda Shaw’s guttural ‘The Kick Inside’ and later symphonic post-apocalyptic ‘Breathing’, and a wonderful ‘Wuthering Heights’ from Bethan Ellsmore, in nod to Bush’s trademark cinematic and literary references and as example of Ellsmore’s vocal prowess.

In each instance, the songs in the warm room are almost shared anew as the performers each bring something different to bringing out Kate Bush’s very best. But one would expect no less from Sandro Colarelli, Lisa Crawley, Josh Daveta, Bethan Ellsmore, Daniel Hack, Lucinda Shaw and Alison St Ledger… the best bringing out Bush’s best in make of an infectiously-entertaining evening.

Between Australian music legend and poet laureate Paul Kelly and Irish chanteuse Camille O’Sullivan, there is a proud Irish heritage, so it is appropriate that it is on WB Yeats’ birthday that they take Brisbane audiences on a journey through Irish poetry in “Ancient Rain”. The show, which combines original songs and music, together with spoken word, was inspired by more than a century of Irish writing and serves as both a reminder of its emotive poetry and range of themes.

It is a darkly beautiful show as it contrasts some of the most important events of Irish history, from the potato famine of the 1800s to the Easter Rising of last century with illumination of the evocative language of descriptions of lines like ‘October coloured weather’ which will linger long after shared. The lush musical arrangements transform the poetry into living art. In collaboration with composer Feargal Murray, Kelly and Sullivan have thread together a tapestry of tender moments of profound sadness at loss of language and country, but also celebration of survival. And lighting complements the mood and considered aesthetics of the elemental sounds of wind and thunder and the sensitive harmonies of the backing band, adding a theatrical feel to the show.

Kelly has a wonderful stage presence (as the country’s best balladeer with recognisable Aussie sounds, his vocals don’t always suit, but his voice is naturally suited to storytelling) and O’Sullivan is a compelling performer, whether in earthy or ethereal voice, meaning that together they are an irresistible combination, in complete command of the material. In Michael Hartnett’s ‘English Part Seven’, O’Sullivan soars in sing of ‘the perfect language to sell pigs in’, while in Yeats’ ‘Easter 1916’ she tantalises with a husky voice in but a whisper. But it is Paula Meeham’s heartbreaking ‘The Statue of the Virgin at Granard Speaks’ that represents the show’s pinnacle, at the end of Act One, as, draped in red veil she tells musical tale of the statue of the Virgin Mary, at whose feet a teenage girl gives birth before dying with her child.

“Ancient Rain” is a powerful project from two acclaimed performers that makes Irish history live again. While its tales are dark and melancholic in their heartache, they are very human stories, which means that everyone will have their own connection to its musical storytelling as they appreciate anew its old tales of war, rebellion and longing for freedom.