Brisbane’s own indie classical quintet, Topology are acclaimed for a reason; their collaborations are as innovative as they are exceptional. Following on from their work with the Kransky Sisters and then Dead Puppet Society, they are back with another interesting collaboration, this time with The Australian Voices choir as part of the Queensland Music Festival. And the result is simply magic.

“Unrepresentative Swill” takes audience members along on a musical narrative ride inspired by famous speeches from Australian history. Composed by Topology’s Robert Davidson and John Babbage, alongside The Australian Voices Artistic Director Gordon Hamilton, the performance navigates pivotal moments that have shaped our nation, taking the words right out of our PM’s mouths in the process. And from Whitlam’s ‘Well May We Say’ to Abbott’s ‘A Stain on Our Souls’ there is something for everyone and from all sides of politics.

This is a balanced work of restraint with the words of the oratory being easily overlayed by the musical and choral work so that no one element ever threatens to outshine the other. In true Topology fashion, the music is simply magic with all musicians being given ample opportunity to shine, especially in their synchronicity with the rhythm of wartime speeches and lingering violin melancholy.

Under the guidance of their enthusiastic conductor Gordon Hamilton, the The Australian Voices choir’s synchronised vocals cannot be faulted as members sing every line melodically and with conviction, especially evident in the final ‘Not now! Not ever’ exclamatory speech of Julia’s Gillard’s misogynist accusations. Tenors add much timbre to pieces and through the singing style and animated faces of choir members, there are many moments of humour to the show, culminating in a John Howard rap, taken from a 1996 Four Corners interview about the parallels between politics and cricket. Indeed, not all speech extracts are from politicians or the political arena, with the program also including numbers such as Noel Pearson’s 2014 eulogy for Gough Whitlam about public progress being the reward for public life and Malcom Fraser’s comment that life is not meant to be easy, made as part of his 1971 delivery of the Alfred Deakin Lecture.

“Unrepresentative Swill” takes its name from former Prime Minister Paul Keating’s blunt view of the Australian Senate, so is an excellent descriptor for the nature of the evening, which ends with encore mashup of famous lines about no children living in poverty, children overboard and Joe Hockey’s recent advice to first homeowners, amongst others. However, while there is some light made, there is also much substance to the program, illustrated through its sensitive approach to such emotional texts as Keating’s 1992 ‘Redfern speech’ including the choral repetition of the line ‘we took the children from their mothers’ as a lingering emphasis of its power.

The show seems to capture the truth at the essence of each message and to complement this, author, comedian and TV personality Adam Spencer’s eloquent and engaging narration is filled with interesting titbits of information and historical context, such as the stories of John Curtain’s death in office and the circumstances behind our nation’s shortest serving politician. His anecdotal style of delivery is both eloquent and engaging and complements the wise choice not to present the speeches chronologically. 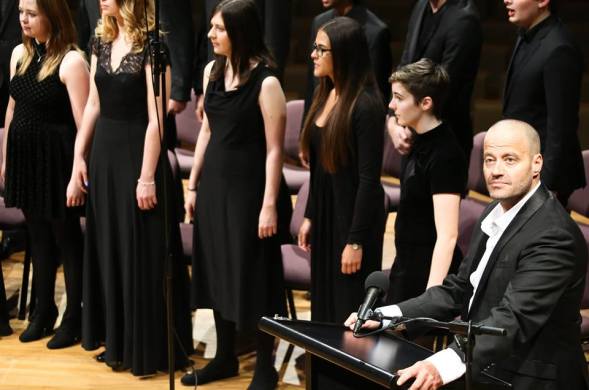 “Unrepresentative Swill” is a distinctive work of much distinction. The intimacy of its reverse mode Concert Hall staging with the audience seated in close proximity to the performers on stage creates an intimate and relaxed atmosphere that suits the unplugged style of interpretation and delivery, and only makes it feel like more of a privilege to experience the superb show.