“The Secret River” is an Australian classic; the internationally acclaimed 2005 novel by Kate Grenville has won numerous awards, the ABC miniseries was a 2015 television highlight and its Sydney Theatre Company stage adaptation has been lauded as outstanding. Accordingly, it is difficult to review the revived adaptation’s Brisbane opening without resorting to a run of superlatives as descriptors, for this is a play that will surely assume a place in the Australian theatrical canon.

“The Secret River” is a difficult story to tell, but a painful and profoundly moving one that needs to be recognised in acknowledgement of this nation’s tragic past and with view to a shared, inclusive future. The grand historical drama tells the story of William Thornhill (Nathaniel Dean) who is transported to the colony of New South Wales in 1806, with his wife Sal (Georgia Adamson) as his master. Pardoned within a few years, he celebrates his emancipation by taking his family to settle on the banks of the Hawkesbury River, of which everyone speaks but few had seen, at the extreme edge of the Sydney Town settlement of the time. He sees a blank page on which he can write a new life despite word of the outrages and depredations occurring in the area. The problem is that the land is part of the territory of the Darug people. As hostility escalates between the families, Thornhill, seduced by his passionate desire for a new life and legacy, makes a decision to stay with him the rest of his life.

Changes to the original text are understandable, however, with the story not touching the Thornhill’s time as a Thames Bargeman in London and then life in servitude in Sydney Town, allusion to the work’s title and the Hawkesbury’s appeal as the ‘best hidden river in the world’ is lost. Decisions about how to stage tricky moments within the production, are, however, embraced. Instead of a group of children swimming in the river, for example, they waterslide across the stage in a moment that is perhaps even more joyous.

The use of narrator Dhirrumbin (Ningali Lawford-Wolf) takes the story to a whole new level, broadening the novel’s third-person perspective to allow the audience to see things through Dharug eyes, as well as Thornill’s. She not only keeps the play emotionally grounded, but encompasses the work by her very existence; the name Dhirriumbin in the play means river, so the river is telling the story.

As Director Neil Armfield notes in the program notes, three years on from its original Sydney Theatre Company season, the show continues to evolve, not only through conversations about the use of the Dharug language but also a new epilogue in which massacre survivor Ngalamalum (Trevor Jamieson) heartbreakingly concludes with the words ‘my place’.

An epic story of this sort requires a large cast, yet it is without a single weak link. As Thornhill, Dean conveys the quiet desperation of a man wanting to define his identity. Adamson is equally strong-willed as Sal. Determined to stay only five years to earn enough for passage home to England, her down-to-earth, bordering-on-bawdy nature provides many of the show’s early light-hearted moments. By contrast, Richard Piper is perfectly unlikeable as the starved-for-company, menacing and aggressively racist settler neighbour Smasher Sullivan, harsh in demeanour down to his high-pitched snigger.

The most powerful performance, however, comes from Kelton Pell as Dharug man Yalamundi, commanding in his every appearance, despite his non-English dialogue. Heath Jelovic, too provides a memorable performance as the youngest of the Thornhill children, Dick, bringing an aching honesty to his interaction with the Dharug family and attempts to convince his father of their shared humanity. 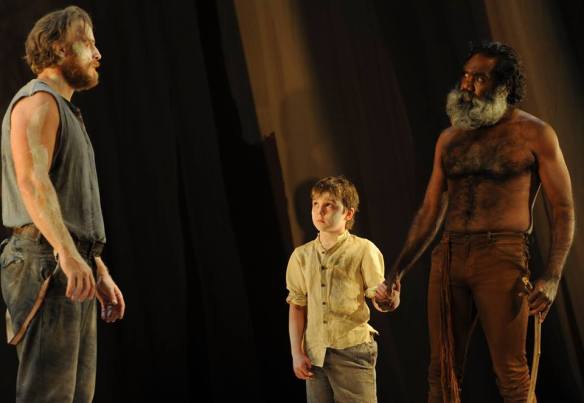 Certainly frontier wars exist as a silence within the narrative of Australian history and engaging with the dark parts of our heritage has to be a positive, not just of reconciliation but as a fundamental part of ensuring identity as a society. However, despite his lack of moral courage, Thornhill isn’t demonised, but, rather, presented as a dedicated family man pressured into undertaking an appalling act. 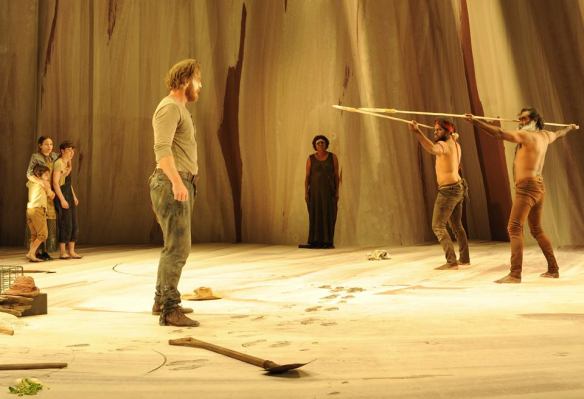 As the two families grapple with language and cultural barriers there are many tense moments. Things are not always shocking, however. Act Two, for example, begins with some humourous moments as the cultural clash between Sal and some of the Dharug women becomes a source of humour, belying for a moment the sinister storyline to follow.

Stephen Curtis’ staging is perhaps the best of anything seen in a Brisbane theatre. The set is simple, yet majestic; the vast Playhouse space is fringed by eucalyptus branches, poking from around the scaffolds of lighting. Folds of cloth fall from ceiling to floor in suggestion of the bark of a giant gum tree to at once create a sense of place and establish the vastness of the continent into which the settlers have ventured. To one side, there is just one campfire, around which an Aboriginal family and a settler family alternately gather, creating a focus.

The story is shaped from here, using clever props; soil is dug, trees are cleared, a rope becomes a boat and blowing flour in the air gives the impression of muskets being fired. Initially steely lighting is warmed by the time of the pre-intermission sing-along by settlers at the centre of their small, cozied world, and complemented by Grandage’s exquisite music, gorgeously realised on piano and cello by Isaac Hayward, performing live with the cast. 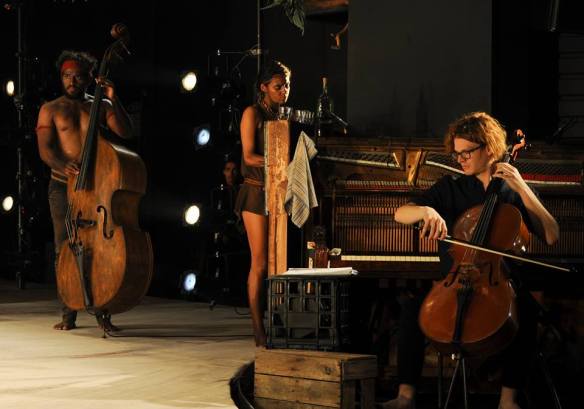 At one level, “The Secret River” is a complex and engrossing story of family and place. Simultaneously, it is an important, unsettling tale in the truth of this nation’s history, full of prophetic commentary like when settler-neighbour Thomas Blackwood (Colin Moody), who speaks the local Aboriginal language and lives with an Aboriginal woman with whom he has a child, warns that ‘ain’t nothing in the world just for the taking’.

Like all great works of art, this superb, multi-layered show appropriately renders one speechless. Indeed, when the play is over nobody in the audience of 850 seems to want to break the moment. And even after a prolonged, tearful standing ovation silence still hung over the opening night audience beyond their comforting of each other as they filed out of the theatre, stunned and traumatised in the most beautiful way.